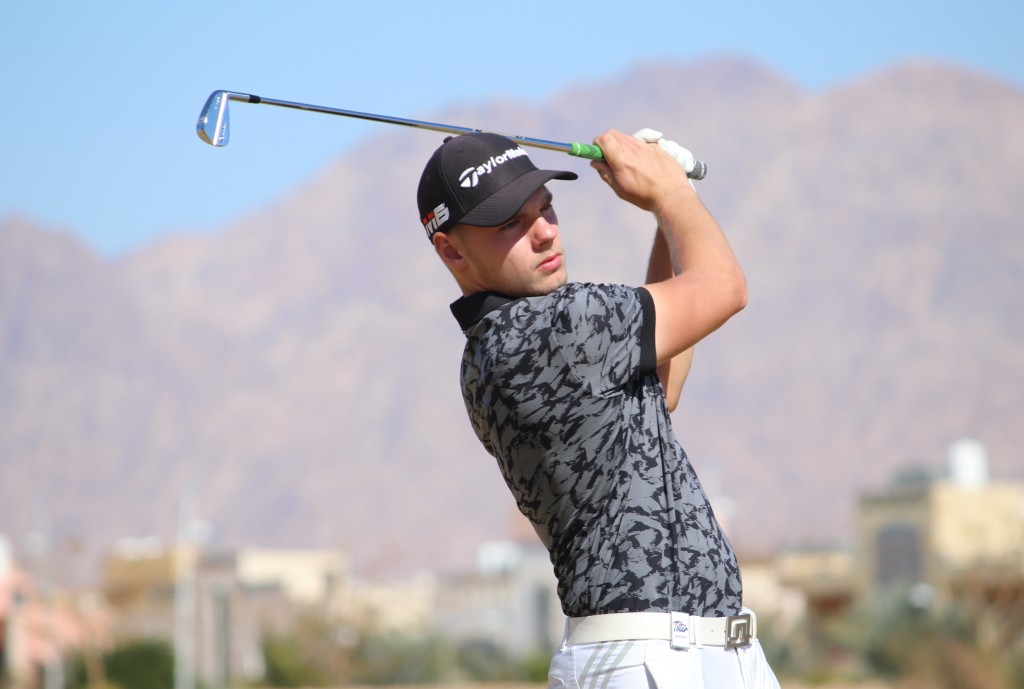 Rookie Knipes may well have to rely on his three shot cushion as he seeks a maiden win in his just his second MENA event.

The two-time Essex Amateur Champion, from Chelmsford Golf Club, played in the tougher afternoon session to stay ahead of the field

The teenage pro shot a four-under par 68 in the second round of the $75,000 NewGiza Open, the first-ever MENA Tour event in Egypt.

The 19-year-old former England junior started the day from the 10th tee with a two-shot lead at NewGiza Golf Club, which has Cairo’s famous Pyramids as a a backdrop.

Curtis made the turn at one-under par with a bogey on the 18th.

Knipes’ second nine was even better as he picked up three shots without dropping any to take his 36-hole aggregate to 10-under, having shot 66 on Tuesday.

“I was happy with that round. It’s always good to follow up a good first round with a solid second to keep yourself in contention,” said Knipes, who qualified for last year’s at Open at Royal Portrush.

Knipes, who is playing only his second event as a professional, added: “Tomorrow is obviously a big day for me.

“It’s the first time leading the MENA Tour and being in the final group of the day. I will just try and approach it as I have done every other day.

“I can’t control what others are doing. I am just going to go out there and shoot the lowest round that I can,” said the 2018 English County Champion of Champions.

England’s 19-year-old Bailey Gill shot the best round of the tournament so far – a seven-under par 65 – to climb to second place at nine-under.

Twenty-two-year-old Gill, who hails from Worksop and plays at Lindrick Golf Club, started with a bogey on the 10th hole, his only mistake of the day.

“It was very cold out there in the morning and I was first off, said the player from the same Nottinghamshire town as Lee Westwood.

Gill added: “I hit a driver and wedge into the 10th yesterday, and it was a driver, three-iron today.

“But I played well after that,” said Gill, who matched the course record at NewGiza Golf Club.

“I will continue doing what I have been doing so far. Just stick to my notes and put up a performance that is hopefully good enough.”

Gros ‘lost motivation’ with no card

SEBASTIEN Gros, who lost his European Tour card after the 2018 season, was bogey-free for his round and hoping to get back to winner’s circle tomorrow.

The former European Tour player, who is a two-time winner on the Challenge Tour, was in tied third place alongside the promising Swede Niclas Weiland.

Both players shot successive round of four-under par 68

Gros said: “Always happy with a bogey-free round. I played well and hit 17 greens in regulation so I did not have to worry too much about getting my pars.

“I just wish I was as efficient as yesterday on the greens, but I should not complain after a 68,” added Gros.

“It was good to finish with a tap-in birdie on the 18th after I missed chances on every hole from the 14th to 17th.

“The last year was very disappointing, but it was very hard to motivate myself to play on the Challenge Tour after spending three years at the highest level on the European Tour,” said Gros giving an insight into the mental challenges players face trying to get to the top.

“My friends told me some very good things about the MENA Tour and how it can be a great preparation for the season, and I decided to come” said Sebastien.

“Hopefully, tomorrow I will be in contention over the last nine holes.”

Conor Purcell, the promising young star from Ireland, was even par for the five par-five holes on the new Egyptian course.

But the last year’s Walker Cup player – who claimed the 2019 Australia Amateur Championship, still shot a 67 to rise to fifth place on seven-under.

The Portmarnock member, who made his first appearance in a pro event in last year’s ISPS Handa Vic Open while still an amateur, made his pro debut in November’s New South Wales Open, having reached No. 10 in the World Amateur Golf Rankings.

Purcell, who has signed for American management firm Wasserman, also received an invite into the Emirates Australian Open, at The Australian GC, in December, as the Australian Amateur Champion, but missed the cut by seven shots.

•Click here for live scoring from the third and final round of the NewGiza Open.