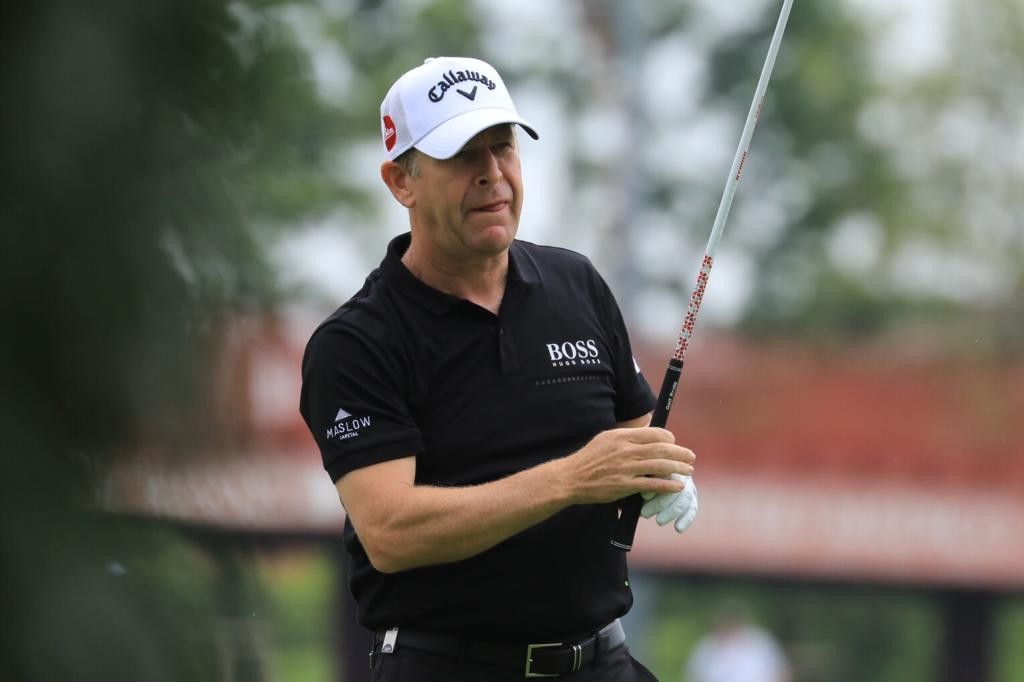 Gary Evans was one of four players to tie the lead after the first round of the Senior Italian Open. Picture by GETTY IMAGES

FOUR players edged ahead of the field and will take a share of the lead into the second round of the Senior Italian Open, including one-time Worthing golfer Gary Evans.

The quartet all shot 68 on a difficult Villaverde Resort course, which enjoyed a day off from rains that have been hitting the north-east region of Italy for nearly six weeks.

With greens that were more receptive to approach shots, but fairways which eliminate distance off of the tee, the four leaders were divided on whether or not the course was playing easier or harder as a result.

“I think it made it harder,” said Wolstenholme, a two-time British Amateur Champion. “There’s quite a few holes uphill, decent par fours that are pretty strong, and you had to hit two good shots to find the green.

“Then once you found the green, you had to be in the right area to give yourself a decent chance.

“Putting was quite tough as well because there is a bit of grain and that grain can play on your mind, so you’ve got to be very positive with your putting, which is not always easy to do.

“But at the end of the day, you get the chance to shoot four under on a golf course as difficult as this, I’m very pleased.”

Evans, who was attached to Mill Ride in Berkshire for many of his 14 years on the European Tour, was also quick to identify another layer of difficulty when the course conditions become this wet.

“I had one in the rough on the tenth where I had a little bit of a jumpy lie and I hit just a smooth nine-iron, and I was lucky it came out perfectly,” said Evans, who made his Seniors debut in the Jordan Mixed Open.

“With the rough being this damp, sometimes it can come out a little heavy, but on that occasion it came out well.

“I’m pleased with my round in these conditions although I probably let a few get away from me on my inward nine.”

Taking a different view, were the other two co-leaders, Brier and Orr.

“As it’s my first time around here, I don’t know how it plays when it’s a bit firmer,“ said Brier.

“But length is not my issue, so I would say it’s probably a bit easier because you can shoot at the pins and it’s not going to roll away or anything.”

Orr, who was attached to Burhill in Surrey, for many years, now represnts Helensburgh GC, from where he hails.

“Although it’s playing a bit longer,” said Orr, “it probably is playing a bit easier because the ball stops when it hits the green. Plus the greens are good – they’ve held up really well despite all the rain.”

Sitting one stroke back of the leading quartet is Berkshire’s Barry Lane, who only dropped a single shot in his opening-round, which also featured an eagle and a chip-in birdie.

Clark Dennis, the winner of the last two editions of the Senior Italian Open, battled hard in his opening round to card a one-under par 71, and place himself firmly in the mix, finishing day one in a share of 11th place.

Should the American go on to win the Senior Italian open for a third time, he would become the first player to win three-successive editions of a Staysure Tour tournament since Colin Montgomerie won the Travis Perkins Masters in 2013, 2014 and 2015 at Woburn GC.

•For live scoring in the Senior Italian Open click here.