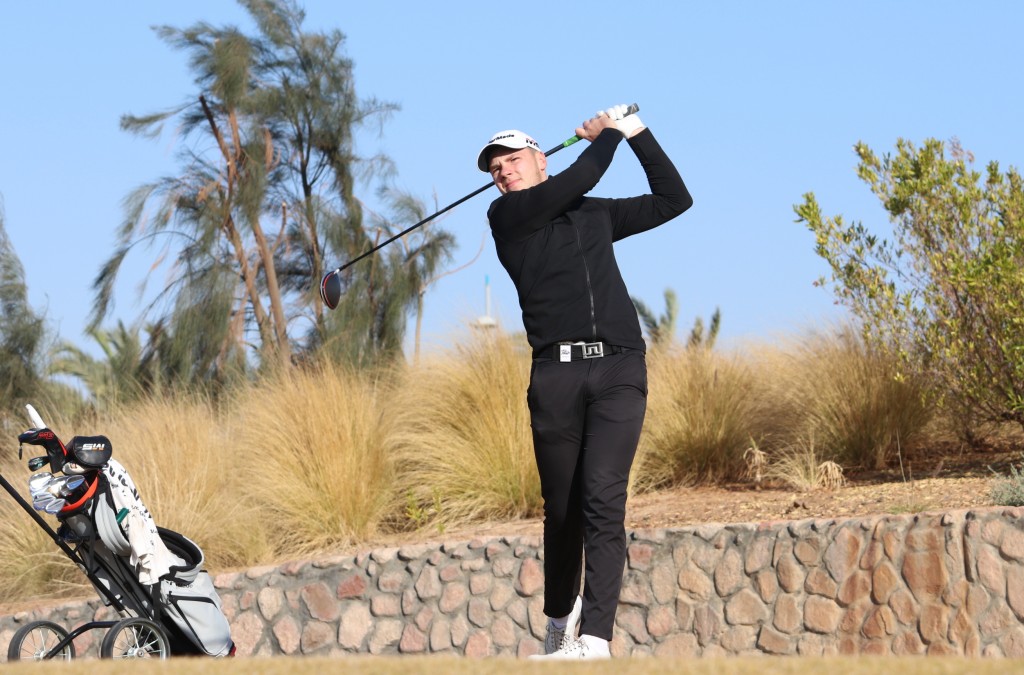 Chelmsford Golf Club’s Curtis Knipes shot a superb 66 – with no bogeys – to take a two-shot lead after the first round of the NewGiza Open, on the MENA Tour’s first visit to Egypt

ESSEX’S Curtis Knipes was the main man in only his second start as a professional on the opening day of the $75,000 NewGiza Open.

The 19-year-old, who came through Final Qualifying to play in The Open at Royal Portrush last summer, fired a superb, bogey-free 66 to take a two-shot lead.

Knipes’s six-under par round gave him top spot on the leaderboard The first-ever MENA Tour event in Egypt.

At the 7,351-yard, par-72 Thomson Perrett & Lobb-designed golf course, Knipes made full use of the calmer early morning conditions.

The Chelmsford GC member was quick off the block with five birdies in his first seven holes, but then battled hard as the wind picked up.

The former England junior interntional then proceeded to make nine straight pars, before picking up his only shot on the back nine – on the par-five 17th hole – to open up a handy two-shot lead at the top.

A happy Curtis Knipes said: “Obviously, very pleased with a bogey-free round.

“It did get a little frustrating to make nine straight pars after such a hot start because when you are on a roll, you want them coming,” added Knipes, who is a two-time Essex Amateur Champion.

“I had good birdie chances on the ninth, 12th and 15th, before I finally made one on the 17th.

“I thought I hit a good three-quarter pitching wedge shot into the par-five hole, but was left with an 18-feet downhill putt and I luckily rolled that in,” said Curtis.

“I really like the golf course. It’s a good layout and it is in great condition. The greens are a bit tricky, but they are rolling nice.”

Why Curtis Knipes has pedigree of Faldo, Lyle, Westwood & Fleetwood

SEVEN players shot rounds of 68 to be in tied second place, but none could get closer to Knipes, the 2018 England Champion of Champions – a title won by the likes of Sandy Lyle, Nick Faldo, Lee Westwood and Tommy Fleetwood.

The reigning Professional Journey to Jordan champion, South Africa’s Maither Keyser started his 2020 campaign with a two-under par 70, which left him tied for the 15th place.

That round included an eagle and four birdies.

Henry, a past winner on the Challenge Tour, had an almost diametrically opposite start to that of Knipes, missing birdie chances on his first six holes, including the second from five feet and on the third from about a foot.

“I was really struggling with my putter on the first few holes,” said the 2012 Kazakhstan Open champion.

“But I was happy with the way I was hitting the ball, controlling it well especially with my irons.”

“A lot of missed chances, but I am happy with a four-under par start. I am playing good and just need to sharpen up the putter a bit and hopefully, I will be contending.”

Busher and Heraty continued to show the form that helped them finish winner and joint runner-up in last week’s Troon Abu Dhabi Pro-Am, while Sloman continued his strong start to the MENA Tour in Jordan, where he finished tied second.

Castle Royle’s David Langley, winner of last week’s Journey to Jordan No. 1, started well with a 70.

UAE’s only professional, Ahmed Al Musharrekh fought back well from being two-over after six holes to finish on 71.

•To follow the progress of Curtis Knipes and the chasing pack in the second round of the NewGisa Open, click here.