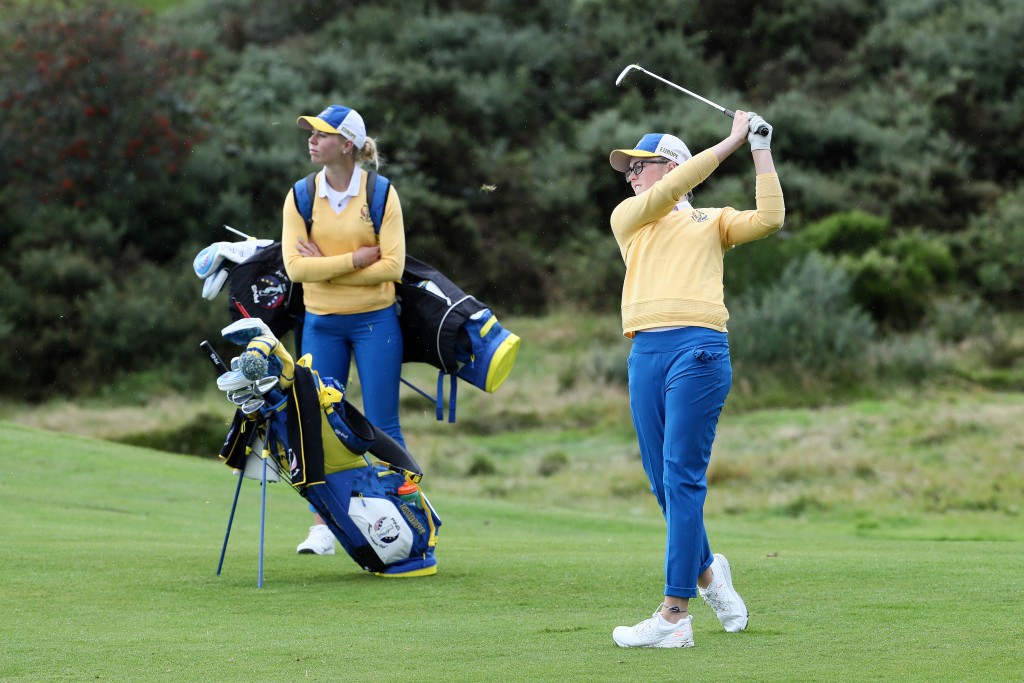 Europe’s Hannah Darling in practice for the Ping Junior Solheim Cup against the USA, which starts at Gleneagles on Tuesday. Picture by JAMIE SQUIRE / WME

SCOTLAND’S Hannah Darling sees no reason why Team Europe cannot beat the USA for the first time in 12 years in this week’s PING Junior Solheim Cup.

The Americans have won four of the last five editions – 2011 resulted in a 12-12 tie – but the 16-year-old Edinburgh golfer believes home advantage and strong team morale will stand her side in good stead.

“It’s going to be tough but we’re on home soil and we’re all playing well so there’s no reason why we can’t win,” said Darling, who won the Scottish Girls’ Amateur Championship in 2017 and 2018.

“Our expectations are to win because I believe we can, but we’re also here to have fun and make memories for life.

“The last few days have been amazing. We’ve bonded loads as a team and had so much fun,” Darling added. “Learning about everyone and seeing how everyone plays has been great.

“We’re making memories. It’s very cool. Suzann Pettersen, Catriona Matthew and a few of the other players were out on the course and came over to say hi. That was pretty cool.

“Just being with the team and knowing you all deserve to be here – it’s almost like a reward for playing well this season. It’s brilliant.”

The PING Junior Solheim Cup is very similar to the senior version with 12 players on each side, and the 10th edition gets under way on Tuesday morning with six foursomes over Gleneagles’ King’s Course.

There will then be six fourball matches in the afternoon, before the contest concludes with 12 singles matches on Wednesday.

Rachel Heck is on Team USA for a second time after helping America to victory in Des Moines two years ago.

Last year the former World Amateur No. 1 also holed the winning putt for the Americans in the Junior Ryder Cup in Paris.

“Any opportunity like this is so much fun,” said Heck. “Being able to represent the United States with my best friends is awesome.

“The Junior Ryder Cup was an incredible experience and I’m sure this week will be, too.

“It’s such a different atmosphere playing on a team. Looking to the side of the green and seeing your team-mates supporting you is amazing,” said Heck.

“It’s a unique experience for us so I’m excited to see what this week has in store.

“Were such a tight group. We travel together all the time and always competing against each other, so it’s really cool to actually come together this week and play as a team.”

It is Heck’s first time in Scotland and she was effusive in her praise for both the country and the venue.

“It’s absolutely beautiful,” Rachel said. “It’s cold but it’s so gorgeous. When we’ve been playing the course I can’t help looking around at the views, it’s so stunning.

“The course is beautiful and in incredible shape. It’s so much fun to play. It’s very difficult – it’s perfect for matchplay because it’s so challenging. We’re all just grateful to be here.”