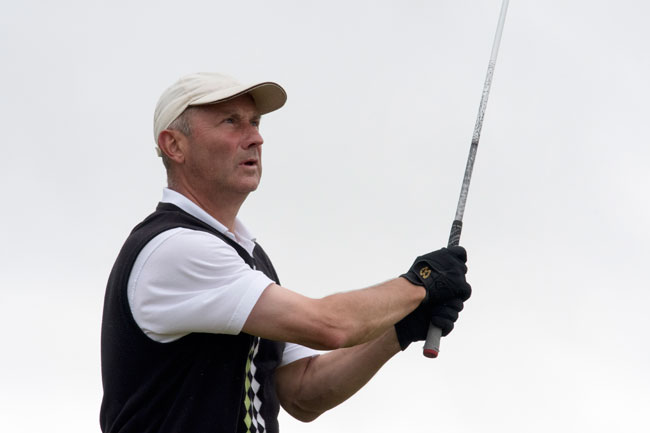 Worplesdon’s Ian Attoe is bidding to become the first player to defend the English Seniors Championship since Alan Squires claimed a hat-trick of wins back in 2012.
Picture by LEADERBOARD PHOTOGRAPHY

He leads by two from Essex’s Mark Stones, from Boyce Hill, with another six players also beating par on the opening day of the championship.

“It was a perfect round of golf, I’ve never had one like it,” said Attoe, from Surrey’s Worplesdon Golf Club, who is looking to become just the sixth player in 39 years to have won the title three times.

His bogey free round started with a pair of birdies and he played the more difficult back nine in four-under 30, signing off with his sixth birdie of the day on the 18th.

His score is just one shot off the course record of 64, held by England Golf Championship director James Crampton.

“I holed a couple of crucial five-footers for par,” said Attoe, who won the championship in 2015, as well as last year.

“I only hit one poor shot all day, my second into the par five 9th, and I putted well, which I haven’t been doing.

“I was a bit apprehensive coming into today, but under the pressure it all went beautifully and I am really pleased.”

Attoe was one of eight players to beat par in the first round of the championship, which is being contested by 288 competitors at both Holme Hall and nearby Elsham Golf Clubs.

Closest to him is Mark Boyce on 67 while Adrian Firman, from Peterborough Milton, returned three-under 68, both playing at Holme Hall.

On 69 is Woodhall Spa’s Paul Wharton, who had an eagle two on the first hole at Elsham – and Beaconsfield’s Tim Whittaker, who played in the most blustery of the conditions at Holme Hall.

“Both the clubs have been incredible,” said Whittaker. “They’re so welcoming. They’ve both been brilliant in the way they’ve prepared the courses and they are playing very nicely.”

Also under par, on 70, are Lancashire’s Bryan Hughes, from Hesketh – a past British Senior Champion – and Royal Lytham & St Annes Ian Crowther, alongside Kent’s John Coupe, from Canterbury GC.

A group of four players shot level-par, including last year’s runner-up – Yorkshire’s Rich Jones, from Rotherham, who lost to Attoe in a play-off a year ago.

The day produced two holes-in-one. Rowlands Castle’s Glynn Catterall used a six-iron for his shot to the 160-yard 13th to give the Hampshire man his first ace in a national championship.

Steve Toyne, a past winner of the Australian Senior Matchplay Championship, had his ace on the 162-yard sixth at Elsham.

After Friday’s second round the field will be cut to the leading 80 players and ties who qualify for the final day’s play.

Saddleworth’s Alan Squires was the last player to win back-to-back England Senior titles – he completed a hat-trick at Aldeburgh in 2012.

Four other players have won the event twice or more including B.B.&O.’s David Lane, who has three wins to his name, and Cheshire’s Roy Smethurst who holds the record with four.