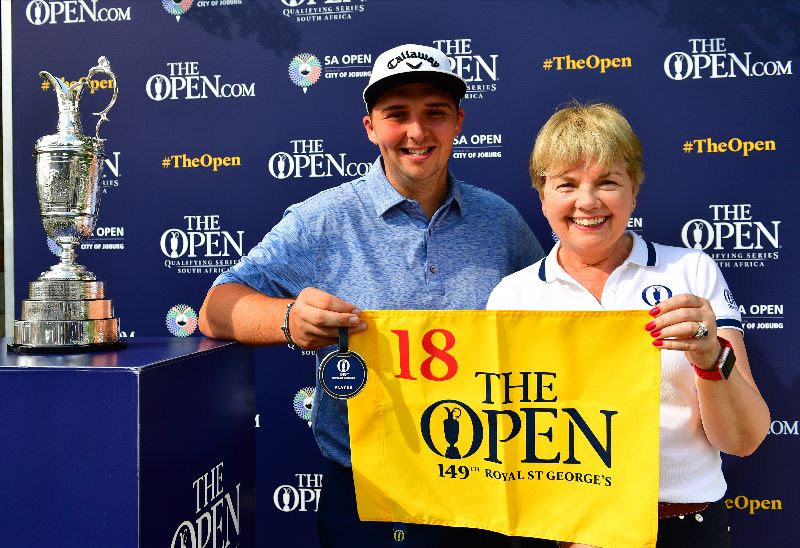 Marcus Armitage gets his pin flag and bag tag from deputy chairman of The R&A Open Championships committee Anne O’Sullivan. Picture by The R&A

The Yorkshire pro birdied the last at the South African Open to seal solo third at Randpark Golf Club – and punch his ticket for the oldest Major Championship after walking off the green with his head held high.

Armitage will be joined at Sandwich by tournament winner Branden Grace and South African Jaco Ahlers – who finished a shot behind Armitage.

The 32-year-old from Huddersfield revealed in the European Tour’s latest Player Blog how 2019 had been a tough year for him and Lucy.

He relied on credit cards while earning less than 15,000 euros in European Challenge Tour prize money after buying a house.

That third place finish not only secured him a place at The Open – but also pocketed him more time five times last season’s winnings.

A clearly emotional Armitage – who played his way on to the European Challenge Tour with three wins on the PGA Europro Tour between 2013 and 2015 – was quick to pay tribute to the love of his life.

“She’s working – we’ve got a house and we just don’t get the quality time. This one’s for Lucy.

“I can tell Lucy that she doesn’t have to do any nails that week. she can book it off and we can go and enjoy The Open.

And even though he has just one Challenge Tour victory to his name – after his win in the 2016 Foshan Open – Armitage is not intending to make up the numbers on the Kent coast.

“I’m looking to win it,” said the Salford-born pro whose win in China earned him his rookie season on the 2018 European Tour.

“It’s the best championship on the planet for me, it’s everything. 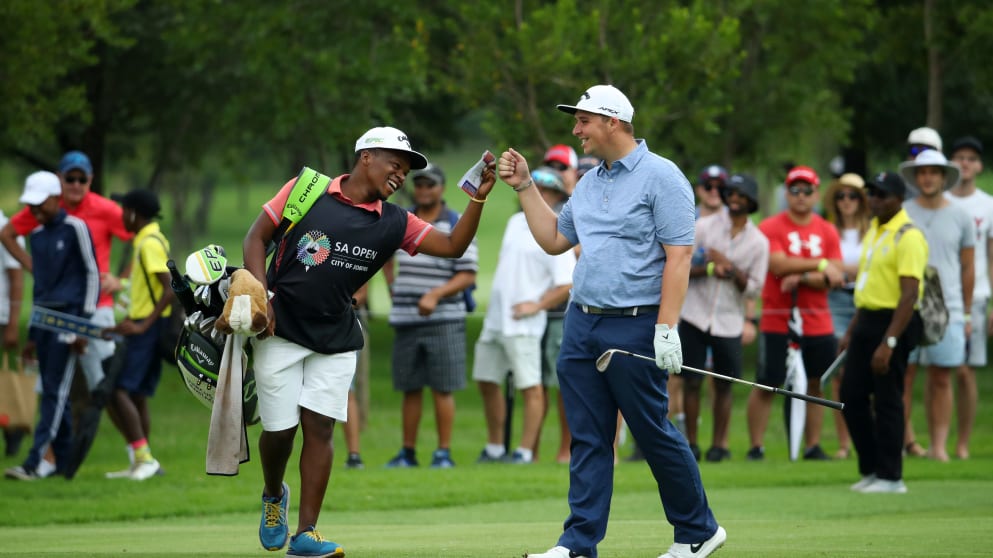 Marcus Armitage made a birdie three at the last at Randpark to qualify for the 2020 Open Championship at Royal St George’s. Picture by GETTY IMAGES00

“That is the dream. People say to you, ‘you’re on the European Tour, you’re living the dream’. No – the dream is when I’ve got a Claret Jug in my pocket and I’m off to find the other three.”

Armitage probably wishes he could play Randpark every week.

The Howley Hall member finished fifth – his best European Tour finish of his career before Sunday – in the 2018 Joburg Open, which was played in December 2017.

And after making his way through the European Tour Qualifying School (ETQS) at Lumine, in Spain, in November, the 2016 Foshan Open winner could not have made a better start to the season.

The prize cheque of €82,063 will ensure that when the ETQS category is reranked for the first time later in the season, he will be among the top earners – giving him a better chance of some starts in the bigger events.

Armitage was certainly a very relieved man after that three on the 18th lifted ahead of Lancastrian Jack Senior, who saw his Open dream dashed.

“Where I was a few months ago, I was off the cliff,” added Armtage. “I’ve turned it around.

“A few people have given me a few keys to change my life and that’s proof you can do it, you can do it in months.

“I’m a product of the hard work I’ve put in,” said the Lancashire lad who lost his mum Jean to cancer when he was 13 – he took up golf to cope with his grief, playing at Oldham Golf Club, before moving to Huddersfield, when he was 18.

It will be Armitage’s second time in the field for The Open after he qualified in 2018. But his chances of contending at Carnoustie were hampered by a freak injury suffered the week before he travelled to Scotland.

The Qualifying School graduate went indoor skydiving and dislocated his shoulder 10 days before he was set to hit his opening tee shot at Carnoustie on Thursday.

Despite being advised not to play, Armitage was determined to play – even though, not surprisingly, he did not make the weekend.

“It was quite pointless really because I’ve already done a tandem skydive from 12,000 feet” added Marcus, “so I don’t know why I went in a wind tunnel,” writing in his blog this week.

“I ripped my shoulder clean out of the socket and it was out for two hours.

“I went to see Poora Singh, one of the physios on the Challenge Tour, and he said, ‘you’re not playing in The Open next week’ and I responded, ‘yes I am, you watch me. I’ll go with half a swing’.

Armitage – known as The Bullet – now has a second bite of the cherry and could not hide his delight after walking off the 18th.

“I knew if I birdied I’d be undoubtedly in next week and in The Open so it was some buzz to hole that putt,” he said.

“It’s just another opportunity to go in there and showcase my talents,” added Armitage. 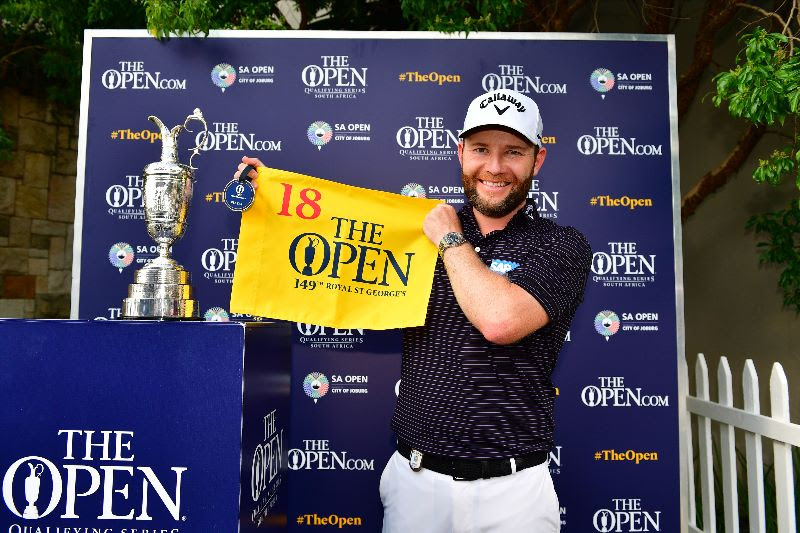 South African Open winner Branden Grace shot the first ever 62 in the 2017 Open at Royal Birkdale and his now heading to Royal St George’s after his victory at Randpark GC. Picture by THE R&A

Grace is happy to be heading to Sandwich

BRANDEN Grace will be playing in his 10th Open with a previous best finish of sixth in 2017 – when the South African made history by shooting the first 62 in a Major Championship at Royal Birkdale.

“I’ve got great memories there from the 62,” said Grace. “I was a little bit sour at the end of last year not knowing I’d secured my spot.

“But after this week, knowing I’ve done it, it’s a great highlight so far and something great to look forward to.

“It’s a dream and if you ask me which Major I think I would win, it’s probably that one. It suits me the most,” added Grace, who has a penetrating low ball flight.

“I played in my first Amateur Championship at Royal St George’s. It didn’t treat me too well, but it’s a great golf course.

“It’s a ball-striker’s golf course, you have to be on top of your game.

“Any Open you play, you have to be on top of your game but I am just stoked to go back – and what a day it has been.”

Ahlers qualified to play in his second Open, 11 years after making it through international qualifying only to miss the cut – at Turnberry, where Stewart Cink prevented Tom Watson from rewriting Open history as the oldest winner of the Claret Jug.

“I’m excited,” said Ahlers. “I haven’t done it in 11 years so I’m really looking forward to it.

“I play the Alfred Dunhill Links every year and I just really love links golf.

“What I hear from St George’s is it’s a pretty tough golf course, so I’m looking forward to the challenge.”

•For the final results in the South African Open hosted by the City of Johannesburg, click here.