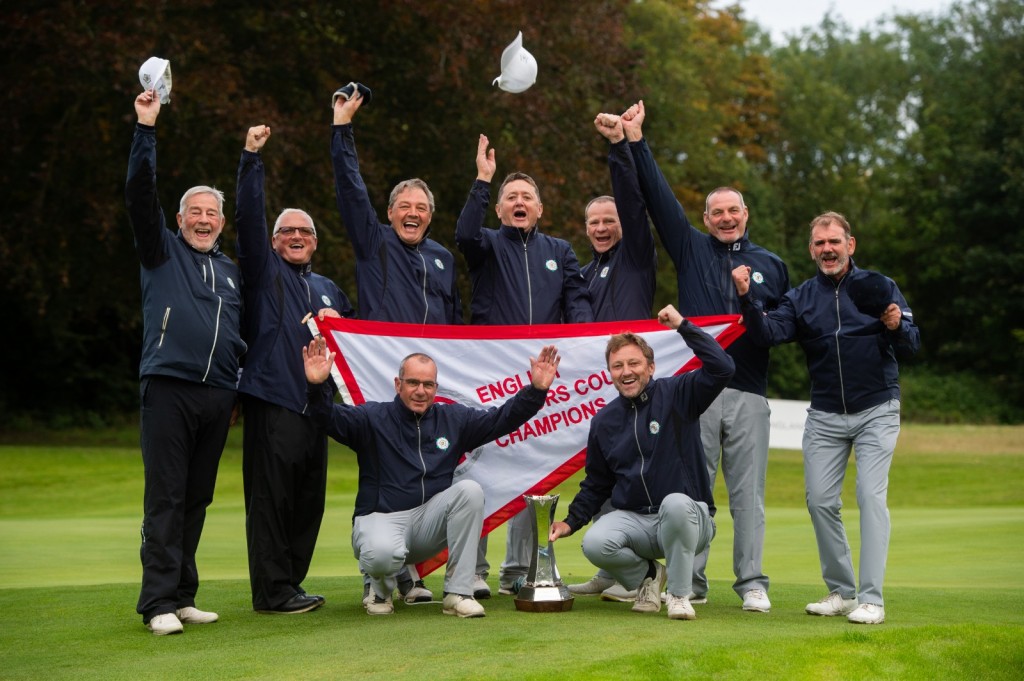 Yorkshire who were crowned English Senior Men’s County Champions after a narrow win over Sussex at Effingham. Picture by LEADERBOARD PHOTOGRAPHY

YORKSHIRE got their hands on the silverware at the English Senior Men’s County Finals helped by a moment of golfing gold from Andy King.

After three days of top quality play at Surrey’s Effingham Golf Club, the outcome of the 2019 final came down to the final two games on the course in a direct shootout between Yorkshire and Sussex.

Sussex knew a draw in the match would see them crowned champions by virtue of having won one more point in their victories over Lincolnshire and Dorset.

Yorkshire needed a win to top the leaderboard and claim the trophy for the second time in three years.

And with two games left out on the course the result hung in the balance.

Then came the moment of magic from King on the 17th hole in his match with Sussex Colin Jones.

With Jones one up, King, from Garforth GC, was faced with an 80-yard third shot into the tricky par five.

A large crowd gathered around the green as the veteran played a brilliant pitch-and-run and found the bottom of the cup for a miraculous eagle.

When he then halved the 18th with Jones, the half point from his game was good enough to give Yorkshire the title for the second time in three years – and leave Sussex as runners-up for a third year in a row.

After playing a key role in the 5-4 win to end the week undefeated in his games, a jubilant King said: “It’s hard to put this into words – what a brilliant effort from a great team.

“The chip on 17 was unbelievable. I hadn’t hit a very good five-wood and left myself 80 yards to go. I played a running shot with a nine-iron and it just kept going and going and then dropped.

“My emotion? Well, I just reached for my driver as I knew I still had a lot of work to do at 18.

“I knew my putt on 18 was crucial in terms of the match, but I didn’t know it was to secure the half point to win the title.

“I won’t lie it was hard to draw the putter back and even harder because I hover the putter behind the ball.

“But when it dropped and the team started cheering I knew we’d done it,” said King.

While there was understandable joy in the Yorkshire ranks, it was hard not to feel sorry for a Sussex side that have had to setttle for second yet again.

But although Jones and Doug Park played valiantly to halve both their games, it wasn’t enough to rain on Yorkshire’s parade.

Sussex captain Rick Thomas must feel as if his team are cursed and the crestfallen look on his face at the conclusion of three fabulous days told a story.

“I’ve been here twice before and it doesn’t get any easier now we’ve lost out for a third time – and by just half a point,” said Thomas, from West Sussex Golf Club.

“I couldn’t have asked for any more from my team – they were terrific and it all boils down a single putt here and there.

“Congratulation to Yorkshire, who played with real grit and determination,” Thomas added magnanimously.

At one stage in the morning foursomes matches it looked as if Yorkshire might coast to a win rather than have to rely on late drama.

On the front nine, Yorkshire were up in all three games, but there were twists and turns still to come.

In the first game, Sussex duo Graham and Seaford’s Martin King were trailing thanks in part to a brilliant eagle on the eighth hole from England internationals Richard Norton (East Riding and Beverley) and Rotherham’ Rich Jones.

But with the match all-square heading down the 17th hole, Irish international Graham’s approach to the par five set up an eagle chance for his partner which King duly knocked in.

Yorkshire found trouble off the tee on 18 and could only make a bogey. With their opponents safely on in two a concession followed and the point went to Sussex.

The overall morning honours, however, went to Yorkshire.

There was final hole drama in the match between Sussex pair Jones (West Sussex) and Park and Yorkshire’s King and Ian Clarke, from Lindrick.

The Yorkshire duo were in command coming into the back nine, but Sussex fought to take the match down the last.

With Yorkshire bogeying the hole, Cooden Beach’s Park had a six-footer for par to earn a half point. However, his well-struck putt caught the lip of the hole and stayed above ground.

In the end it was small margins such as this over the three days which decided the destiny of the trophy.

The other match on the final day of the four-team round robin series involved Lincolnshire and Dorset playing for pride after losing on days one and two.

Eventually it was Dorset who came out on top with a 51/2-31/2 win to repeat their third-place finish from last year.

However, the glory of the week belonged to Yorkshire and skipper John Grimbleby.

The Howley Hall member said: “This was a brilliant advert for senior men’s golf and I’m so proud of my team – heroes one and all.”