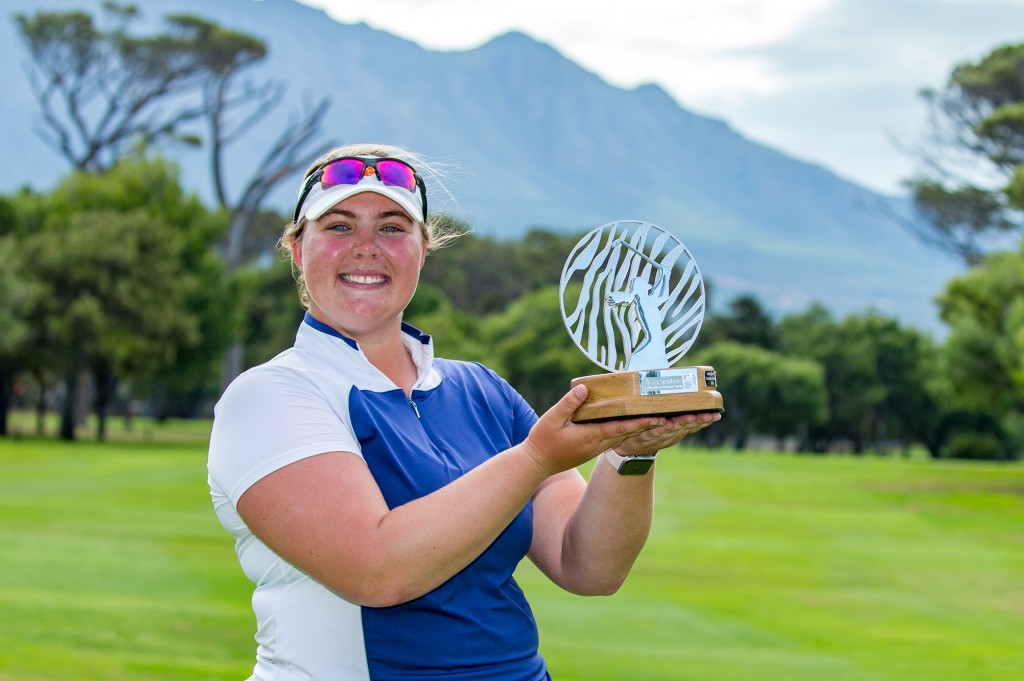 Alice Hewson, who won on her first professional start in the Investec South African Open in March, spoke about her golf life to England’s current national squad plaeyrs. Picture by TRISTAN JONES

THE next adventure for Hertfordshire’s Alice Hewson in her blossoming professional career will come – appropriately enough – via the newly-announced Rose Series.

However, Hewson will always make time to talk about her amateur golfing roots at Berkhamsted Golf Club and as a member of various England squads.

The 22-year-old is one of England Golf’s most recent success stories.

Alice said: “England Golf gave me so many opportunities to travel the world and develop my game that I’m happy to pass on my experiences to the next group of players coming through.

Her story was one which held the attention of her appreciative online audience.

Having bid farewell to the amateur ranks by winning the European Ladies at Parkstone Golf Club last August, Hewson made an incredible start to life on the Ladies’ European Tour in March.

She won the South African Open in her first event as a pro on the Ladies European Tour.

On the back of a stellar amateur career which also saw her play in a winning Curtis Cup team and helping England to back-to-back European team titles – it was further confirmation that Hewson is one of world golf’s rising stars. 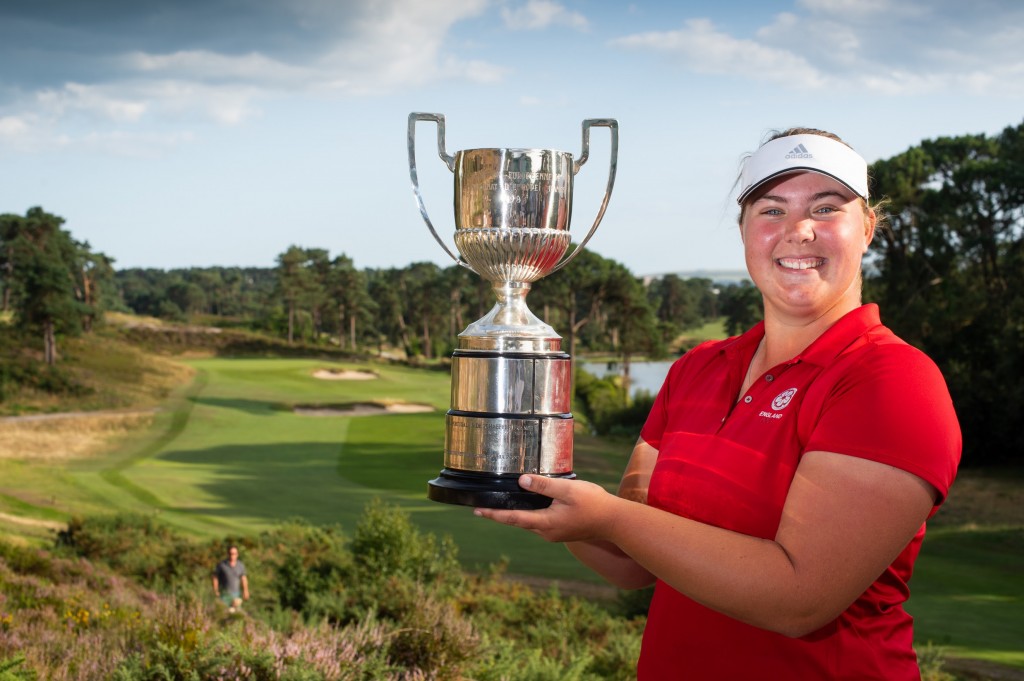 HEWSON’S competitive season tees off again on June 18 with the first of the seven tournaments that have been sponsored by England Golf ambassador Justin Rose and his wife Kate.

The Rose Series is a huge boost to the women’s game hit hard by the interruption to the season caused by the COVID-19 pandemic – just days after Hewson’s win in Cape Town.

And for Hewson it’s a chance to write more chapters in her story which she was only too happy to recount for England’s current crop of leading amateurs.

Alice admitted: “I signed off my amateur career by winning the European Ladies and then to start my time as a pro by winning as a rookie was amazing.

“It actually didn’t feel too bad in South Africa coming down the stretch as I had no pressure on me to win.

“I had been in Abu Dhabi the week before for an event that was eventually cancelled.

“But I was in and around many of the tour players and got to know them so I was comfortable in my surroundings.

“I think the experiences I enjoyed with England in team events and winning individual events also helped me cope – and made sure I had no negative thoughts.”

She reinforced her view that an amateur golf career running parallel to a sound education was a smart move. 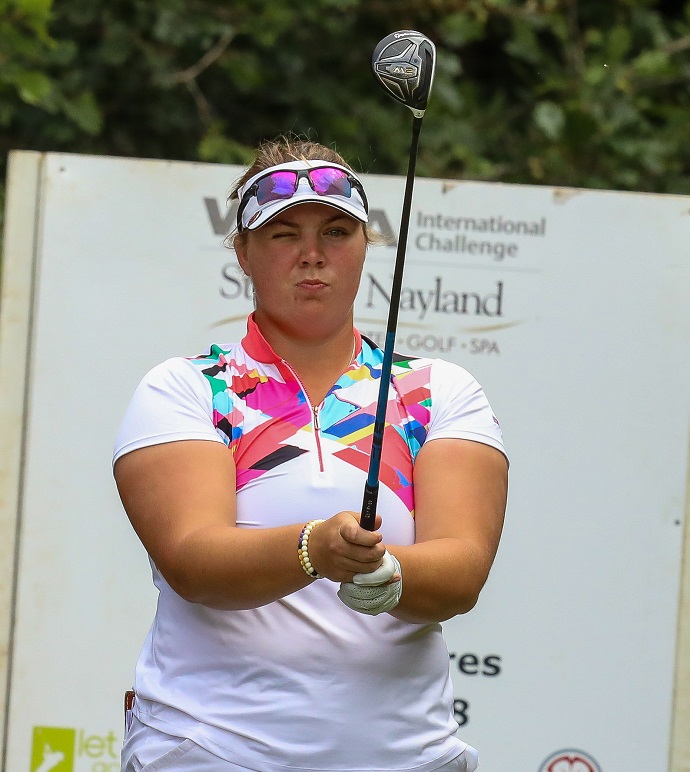 LET winner Alice Hewson is also a member of the Symetra Tour in the USA. Picture by ADRIAN MILLEDGE

After lockdown, Symetra Tour win is the aim

LOCKDOWN has allowed Hewson to take a breath and continue to work on her game – and target success in the US.

There have been coaching classes via Facetime, yoga sessions and a chance to work on some minor improvements to her game – and nip any bad habits in the bud.

“I’ve enjoyed the time at home as I decided to turn a negative into a positive by working on different aspects of my game,” Alice revealed.

“Now I can’t wait to get started again in the Rose Series at Brokenhurst Manor. It was brilliant of Justin and his wife to invest in and support the women’s game.

“I’ll now look to balance my schedule for the year, as I also have rights on the Symetra Tour in the US.

From Wee Wonder to world star in the making… 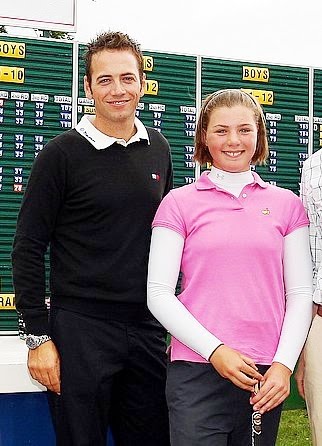 Alice Hewson as a finalist in the HSBC Wee Wonders with Nick Dougherty, at St Andrews, in 2009

ALICE – who tasted success early in the HSBC Wee Wonders series – also reflected on her years as an England player.

They helped her develop life skills and ease the transition from amateur to pro circuit, as well as the obvious technical benefits of working with renowned coaches such as Steve Robinson and Rob Watts.

Hewson said: “I’m passionate about education and was happy to give my thoughts on the college scene in America, and how balancing this with an amateur career can be beneficial.

“You never know what lies ahead – a player may get injured, you may fall out of love with the game. You need that back-up.

“As well as the educational side, the golfing opportunities are also incredible and it’s the best of both worlds.”

Alice was an all-round athlete before she even became a teenager, playing golf from the age of seven, when she had a very respectable handicap of eight.

As a 12-year old the Berkshamsted School pupil swam in the 2009 British National Championships in Sheffield, competed in the Wee Wonders finals at St Andrews after winning her regional qualifiers.

And to top it off, she put on her spikes to compete in the English Girls U13 Championships and played in the US Kids Championship, at Pinehurst, in America.

That winter she was part of the England Super Birdies Development Squad based at Brocket Hall, and made her Curtis Cup debut six years later, having won the Scottish U16 Championship and the Hampshire Rose.

After two years of regional training Alice became a member of the England Girls squad from 2013-14. She was promoted to the Women’s Squad in 2015 for the next three years.