By Andrew Griffin on 1st December 2019 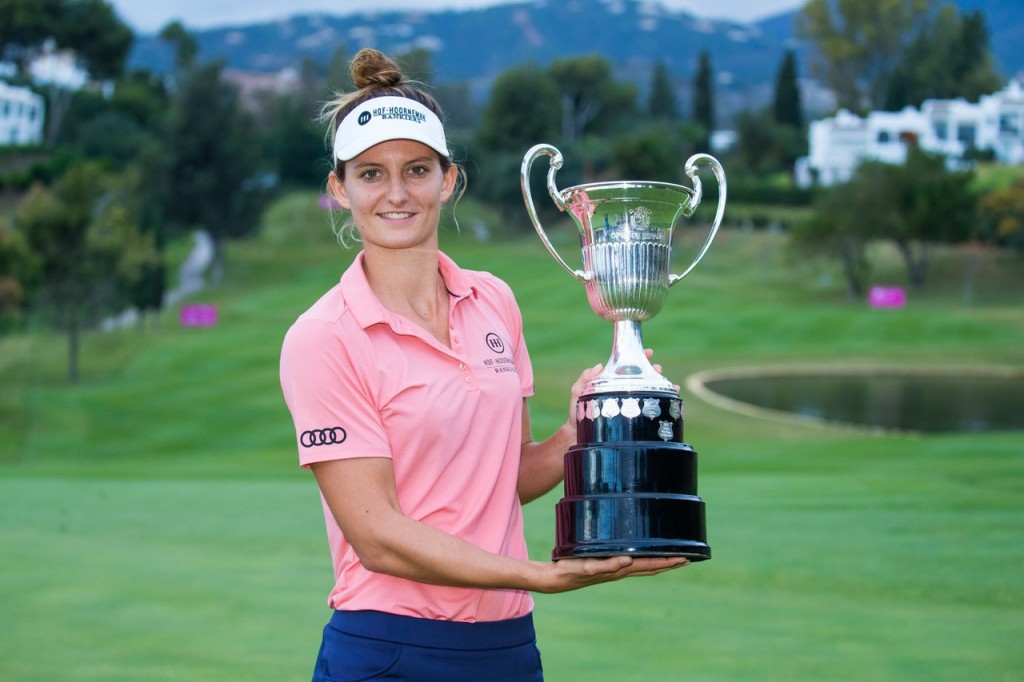 Van Dam was three strokes behind Nanna Koerstz Madsen after the third round and the Dane was still one ahead standing on the 18th tee.

However, as the winds strengthened, Madsen hit an aggressive drive into the lake left of the fairway and then three-putted to run up a double bogey.

Van Dam used her four-iron to split the fairway, before playing up to the green and eventually rolling in a two-foot putt for par to seal the victory.

It was her second of the 2019 season, following her win at the ActewAGL Canberra Classic, in March.

“I did not expect that,” said 24=year-old Van Dam, who earned her third trophy in Spain, following her Estrella Damm Mediterranean Ladies Open and Andalucía Costa del Sol Open de España titles in 2018.

“That’s golf. It was a crazy day. If you would have told me at the beginning of the day that two under was enough to win, I would have said, okay, I’ll take it,” added Van Dam.

“It was a different day with harder conditions, a little bit of wind and it got really cold towards the end.

“Nanna is a good friend of mine and I would have loved to have beaten her in a play-off; that would have been a better feeling for me – but that’s golf.

“She took more of a risk hitting a driver off the tee and I’ve been hitting an iron off the tee there all week.”

Van Dam, the longest hitter on both the LET and LPGA Tours in 2019, took her driver out of her golf bag for the tournament, but admitted she is keen to be reunited with it in the near future.

“I’m not sure we’re going to keep that going, because I love to hit driver,” the Dutch Solheim Cup player revealed.

“But it was a different week and you didn’t need a driver much this week. I just stuck to my plan, even though it was hard to only hit three-wood sometimes.

“It was a game plan we made this week and it paid off. I had a three-iron and a four-iron I could use off the tee as well as a five-wood and a three-wood, so I had a lot of options from the tee and I think that paid off.”

Van Dam shot 13-under at La Quinta Golf and Country Club to win the title 12 months ago, winning by three shots.

A final two-under par 70 in breezy conditions was enough to seal the title once again, as the defending champion got to 13-under for the week.

Madsen wound up tied for second with India’s Aditi Ashok on 12-under and was clearly disappointed.

She had taken a two-stroke lead into the back-nine after holing her second shot for eagle on the ninth hole.

Although Madsen double bogeyed the short 13th to drop into a share of the lead with Van Dam, she had birdied the 16th to regain the advantage.

Madsen said: “I lost today – Anne didn’t really win. I played terrible and had three double-bogeys which cost me everything.

“On one hole, I had a wrong distance, then I pulled one and then on the last one, I played aggressively and had said that I would play driver, no matter what.”

The Buckinghamshire-based LET now moves south for the season-ending Magical Kenya Ladies Open, where Skarpnord is set to be crowned as the winner of the LET Order of Merit.

German rookie Esther Henseleit is the only player who could unseat her, should she secure her maiden win.