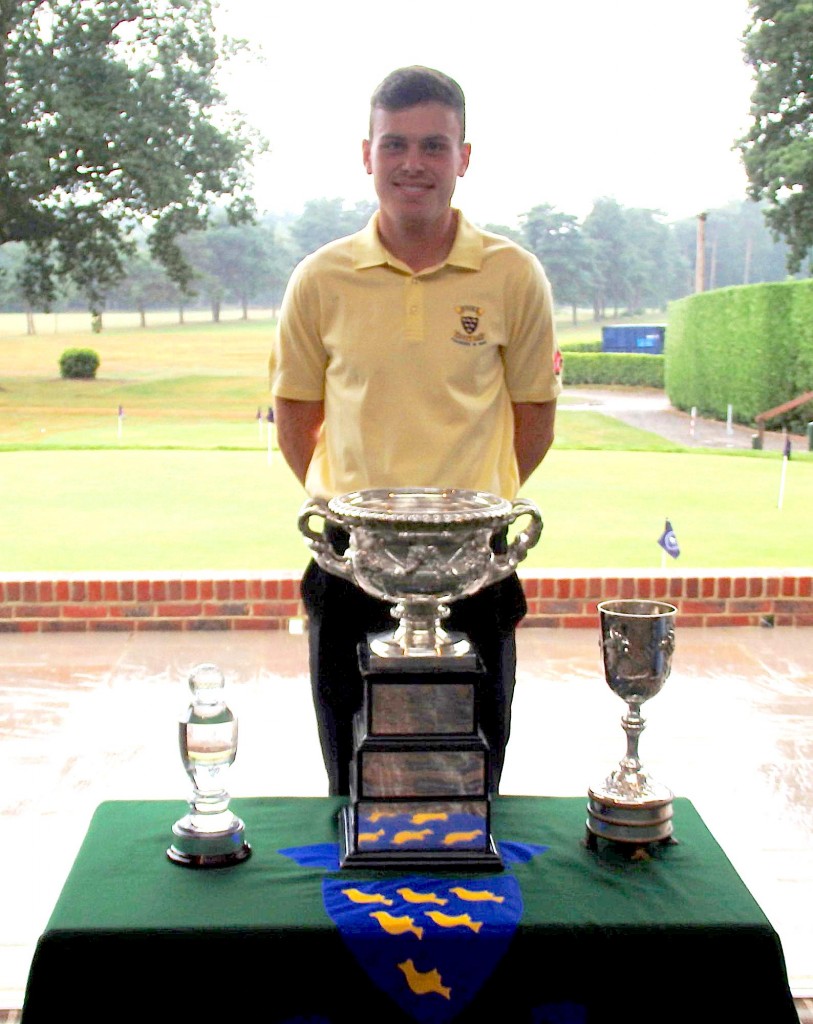 SUSSEX reigning English Amateur champion Thomas Thurloway was another amateur to have a great day at Final Qualfying for the 148th Open Championship at Royal Portrush, later this month, finishing in the top three at Notts Golf Club’s Holinwell.

Thurloway, who is about to go into his senior year at the University of Toledo, had what can only be described as a rollercoaster finish to his second round during which he drove the green on the 346-yard par-four 16th – but then left his eagle putt in the jaws of the hole.

He then watched as his drive on the long 17th clip a tree and drop into the rough no more than 100 yards from the tee. From there he did well to escape with a par-five before completing the job with his fifth birdie of the round on the closing hole.

“It was pretty crazy finish but I’m just glad I did enough to get the job down. I still can’t quite believe it. It’s been a strange sort of year for me after winning the English Amateur. I did win the Seminole Intercollegiate in the States, but I haven’t done quite as well as I thought I would.

“This makes up for all of it though. I’ve always dreamt of playing in The Open and to do it while I’m still am amateur makes it even more special. I’ve never played Portrush but I know a couple of guys who live there so I will have to get on the phone to them. I can’t wait to get there and experience the atmosphere.”

Wilson carded rounds of 69 and 67 to take top spot at on seven-under-par after posting a total of 137. He was five-under through 17 holes of his morning round before carding a double-bogey six on the 18th – but then bounced back in the second round with five birdies in an opening nine half of 31.

The 25-year-old former English international went on to birdie the 14th but then dropped his first shots of the round on the 15th and 16th before regaining his composure to bag two closing pars.

Wilson, who is attached to Rockliffe Hall, the same club as Web.com player Callum Tarren, said: “It means the world to me to play in The Open. It’s awesome. I’ve only been a pro for six months so it’s a big achievement for me and something I’m sure I’m going to get a lot from.

“I felt pretty confident until I bogeyed 15 and 16 and after that I was just praying for two pars. I’m buzzing now but I’ve got to drive home tonight and then go to the next EuroPro Tour event tomorrow.”

But this time Turner had to do it the hard way by carding rounds of 67 and 72 and then beating David Coupland at the third hole of a tense play-off with a bogey five after both players had driven into a fairway bunker off the tee.

Turner. who overcame being diagnosed with cerebal palsy at an early age, to become an England junior and Daily Telegraph Junior Champion in 2013, said: “I am very relieved. It was stressful second round. I left myself quite a few testers but fortunately I managed to get most of them in.

“It’s a shame the play-off ended the way it did but I can’t wait to get to get to The Open and give it another go. I’m sure I will learn from my experience last year. It was a bit surreal but now I know what to expect.”

Lancastrian Jack Senior also made it to The Open for the second year in a row when he finished alongside former Amateur Champions Garrick Porteous at St Annes Old Links on 10-under after carding a total of 134, with Matthew Baldwin, a former England Boys captain, the third qualifier a stroke behind.

Senior, from Heysham just up the Lancashire coast, added his second 67 of the day to finish alongside Newcastle-on-Tyne’s Porteous, who had earlier set the mark of 134, also with a matching pair of 67s.

Senior – the winner of the Hampshire Hog at North Hants in 2011 – bagged five birdies in a row from the second to move to 10-under then birdied the 10th and 12th to storm clear only to drop shots at the 13th and 15th holes before parring home.

“I just like the golf courses round this area and it’s great to make it through for the third time having qualified at Hillside and now here for the last two years,” said Senior who has played on the EuroPro, Alps and Challenge Tours after turning pro eight years ago.

“It’s a dream to play another Open Championship. I missed the cut last year but hopefully I can do the business at Portrush,” added the 30-year-old who beat Jordan Spieth in the 2011 Walker Cup at Royal Aberdeen, when Great Britain and Ireland beat the USA.

Porteous, The Amateur champion in 2013 at Kent’s Royal Cinque Ports, in Deal, had a mixed bag of eight birdies and three bogeys, clinching his place with birdies at the two closing par fives. He said “It means the world to make it. It’s everyone’s dream and it’s such a special year being in Ireland. I’m sure the crowds will be something else.”

Baldwin, from Southport, led after an opening 65 then added an afternoon 70, breaking away from the pack on eight-under with a birdie at the par-five 18th, when he got up and down from 40 feet from just off the green to seal the final qualifying place.

Baldwin, who has been to Qualifying School six times since 2007 and has played five full seasons on the European Tour, said: “I played as good as I’ve played all year this morning. Not so good in the afternoon.

“But it’s incredible to get to Portrush. I’ve played the Irish Open there before. It’s a great course and I’m really excited to be going back,” added the former England Boys captain. 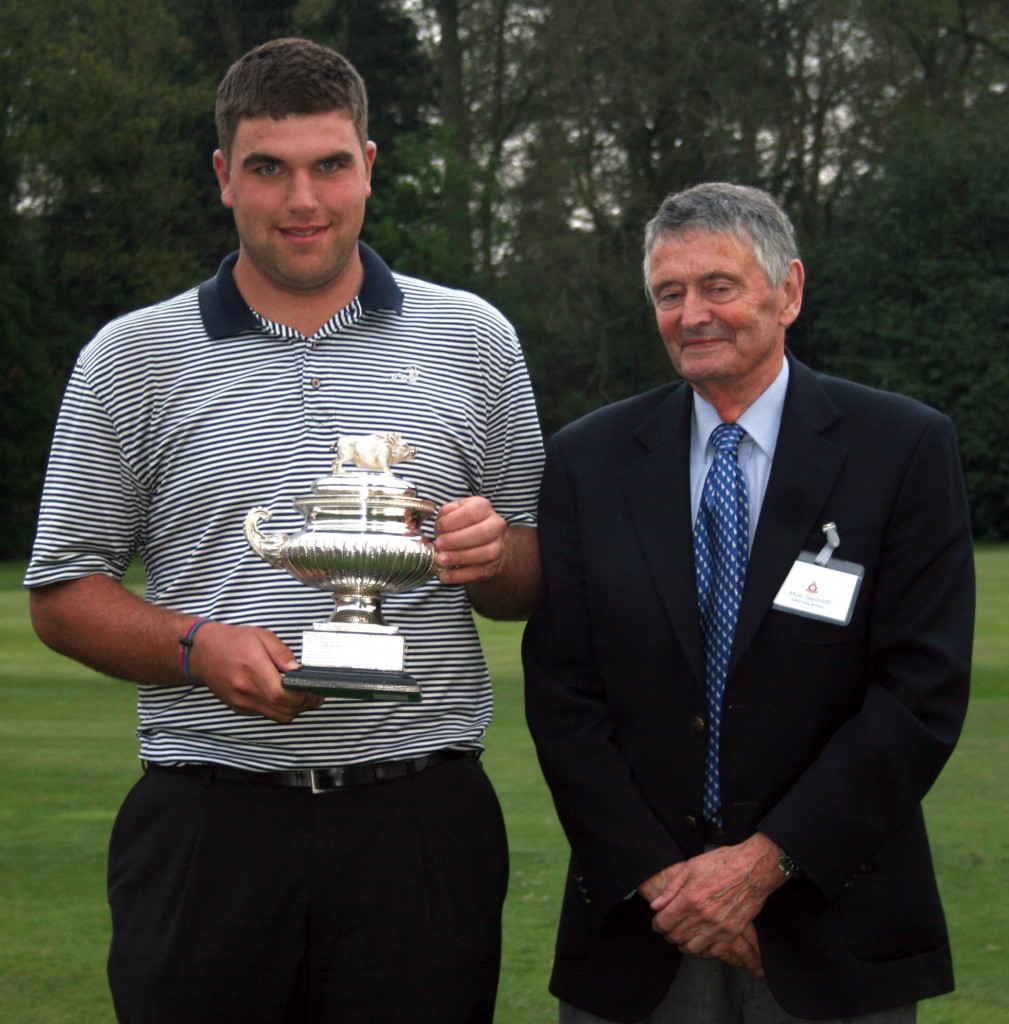 Jack Senior, who won the Hampshire Hog back in 2011. Picture by ANDREW GRIFFIN / AMG PICTURES