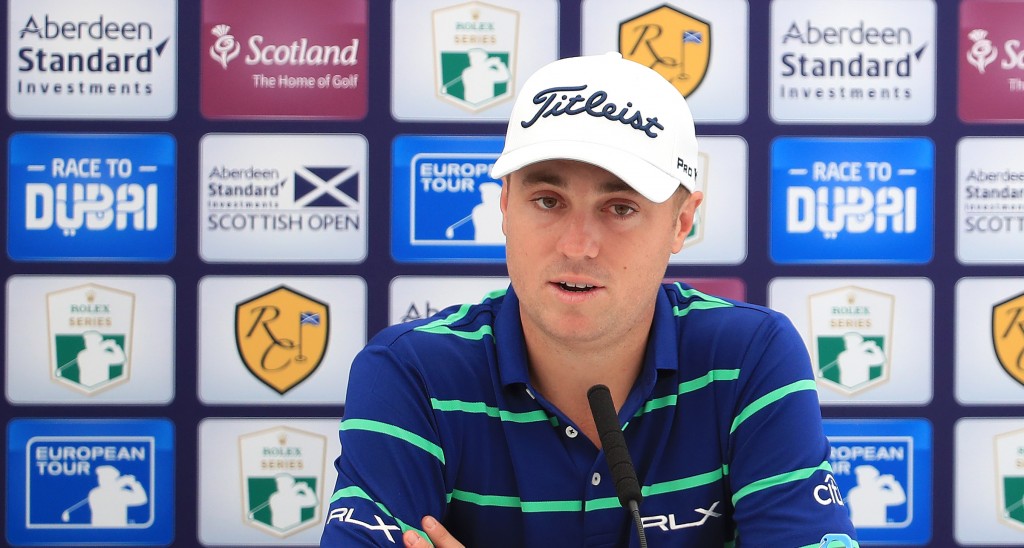 Justin Thomas loves playing links golf for the variety of shots he is forced to play… but the 2017 USPGA Champion admits he has yet to fully work out what the best strategy is as he prepares for the Scottish Open at The Renaissance Club. Picture by GETTY IMAGES

JUSTIN Thomas is determined to solve the conundrum of links golf when he makes his Aberdeen Standard Investments Scottish Open debut at The Renaissance Club in East Lothian.

The American Major winner has taken full advantage of the glorious surroundings of Scotland’s Golf Coast, enjoying a round with his father and compatriot Kevin Kisner, at North Berwick, before teeing it up a few miles along the coast in the third Rolex Series event on the 2019 Race to Dubai, which starts today (Thursday).

The World No. 9 made his European Tour debut at the Alfred Dunhill Links Championship six years ago, but did not make it to Sunday and has missed the cut at The Open Championship in the past two seasons.

But the 26-year-old insists that he loves links golf and is relishing the test posed at The Renaissance Club this week.

“In terms of if I could play one golf course every day for the rest of my life it would probably be a links golf course over here because you can play the same course and it can play so different every single day and every week.

“That part is enjoyable. You have to hit so many different kind of shots and you have to have a lot of imagination.

“But that being said, I haven’t been very successful on links, for as much as I do enjoy it, and feel that I can play it well.

“I just obviously haven’t figured it out totally. So, this is why we felt like it was the best decision to come to the Scottish and to get at least one more round, tournament, under our belt before next week.

“North Berwick was very enjoyable. We were lucky they let us go out. My dad got to play, too and always entertaining playing with Kis.

“Us three went around, got our trollies, played for about three hours and had a pint after. It was a great way to spend our first day here.”

Four-time Major winner Rory McIlroy is also eyeing a maiden win in Scotland as he tees it up at the Aberdeen Standard Investments Scottish Open for the second time in three years – after opting to miss last week’s trip to Lahinch for the Irish Open, having been the tournament host since 2015 through his charitable foundation, which has now been wound up.

The Northern Irishman has 13 European Tour wins to his name, but victory at The Renaissance Club – sandwiched between Muirfield and Archerfield – would bring his first Rolex Series title, in the week before he contests The Open Championship in his homeland.

McIlroy, who will be seekng his first Major win since 2014 when he plays at Royal Portrush next week, said: “I’m playing this event with two eyes firmly focused on the Scottish Open.

“First and foremost, I want to play well here. I want to get myself into contention and have a chance to win a golf tournament.

“I think if I do that, that’s the best way to prepare for next week. You know, get yourself into contention. Feel the heat of getting in there on Sunday and trying to play some good golf.

“I would definitely like to win here. I’m here fully focused on this event. I think most tournaments deserve to stand on their own two feet and have some stature, and the Scottish Open is one of these events on the European Tour.

“It’s a big event. A lot of prize money, a lot of points. So, it deserves to stand-alone and not just be this tournament that’s attached on to the week after.”

Meanwhile, Rickie Fowler is looking forward to continuing his love affair with Scotland’s national open after tasting victory just along the coast in Gullane in 2015.

And never having finished outside of the top 10 in his four previous appearances. Fowler is grouped with McIlroy and up-and-coming Scottish star Robert MacIntyre in today’s first round – and he’s relishing the prospect of playing in front of Scottish crowds again.

Despite being a new venue for the Aberdeen Standard Investments Scottish Open, American Matt Kuchar has played a number of rounds on the East Lothian venue in recent years. He is back for his ninth appearance in this event and is aiming to go one better than his runner up finish behind Fowler in 2015.

Fowler said: “Looking forward to it. I got to see Bob MacIntyre on Monday and we had a little challenge together, the 14-club challenge.

“We had some fun doing that together. Obviously he’s a great player and looking forward to playing alongside him. I’m sure we’re going to have some good crowds.

“I get a lot of local support, which I definitely appreciate. I think they can see how much I love not just the game of golf, but links golf and being over here, choosing to play here the week before The Open.

“This is always a fun week for us.”

“Have just really enjoyed coming to the Scottish Open over the years, whether it be Loch Lomond or Gullane or any of the other courses we’ve played.

“It’s been a great experience and made many great friends here and always a lot of fun to return.”