By Andrew Griffin on 7th October 2019 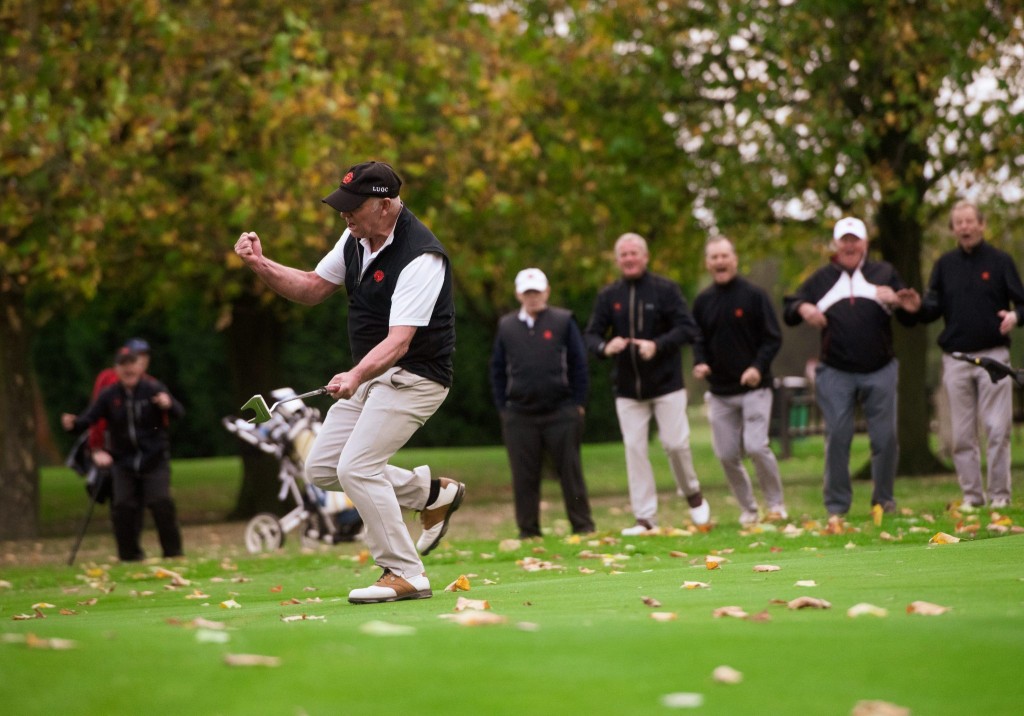 Lancashire’s Bryan Hughes celebrates after holing a monster putt to earn his county a half that denied Sussex a first English Seniors County Championship title at Stanton-on-the-Wold Golf Club. Picture by LEADERBOARD PHOTOGRAPHY

SUSSEX Seniors are fired up to win this year’s English Senior County Finals having come within a whisker of being crowned champions at Stanton-on-the-Wolds a year ago.

With one hand on the trophy, rivals Lancashire were already beginning to congratulate Sussex on a job well done when the Gods intervened.

Perhaps, more accurately, Bryan Hughes intervened. The veteran rammed a 30-foot birdie putt into the cup to beat Colin Jones on the 18th hole and shatter Sussex’s hopes of a first-ever win in the event.

Hughes’ monster putt secured a vital point for the Northern Champions as they came from behind in the final hour of the final match to pip Sussex to the post.

Without that tramliner dropping, Jones would have earned a half point to hand Sussex the silverware.

As a result Sussex’s Over 55s team have been counting down the minutes to this week’s 2019 finals ever since they qualified through the regional rounds by dominating the South East Group, winning by 26 shots at East Sussex National, in July.

There are some golfing ghosts to be exorcised on the fairways of Effingham GC as the Surrey club hosts the 2019 English Senior County Championshiop decider.

Lancashire have not made it through to the finals to defend their trophy at a course which offers some incredible views of the capital.

Instead, Dorset, Lincolnshire and Yorkshire will battle it out to stop Sussex seeking redemption and being named top dogs on the senior circuit – and at the third time of asking over the last three years.

And the same Sussex squad who have dominated the South East division over the last three years, and – who came agonisingly close to winning their first Senior crown last year – are back as the men on a mission.

“I don’t think about that putt all that often,” said Sussex stalwart Steve Graham.

“It’s only once a day now compared to once an hour!” Graham said, mimicking Doug Sanders’s famous quote some 30 years after missing a short putt to win The Open at St Andrews, and then losing the play-off with Jack Nicklaus.

“It was a bit of a bombshell and I think it’s safe to say that we all have the motivation to go one better this year,” said Graham, who led the individual qualifier at East Sussex by three shots.

“Fair play to Bryan and Lancashire for winning but it was a blow to us after playing so well all week.

“Some of the Lancashire boys were starting to say ‘ah well, it looks as if you’re going to win’. Then came that putt.

“This is the third year in a row that we have reached the finals. The competition will be tougher than ever, but maybe we’ll be the ones to hole a winning putt.”

Irish international Graham – a member at East Sussex National – has enjoyed a fantastic year as an individual winning both his county title and then the champion of champions at Frilford Heath GC.

But he’s not the only player enjoying a good burst of form late in the season.

Yorkshire can boast the talents of Rich Jones and Richard Norton, who both played for England in the Home International win at Alnmouth GC, last month.

Paul Wharton also contributed to the England triumph and will be in the Lincolnshire ranks for three days of competition – alongside four of his fellow members from Woodhall Spa GC. the home of England Golf.

Dorset’s squad is also a talented one having made it to the same stage last season before finishing third behind Lancashire and Sussex.

Of the four counties competing this year, only Yorkshire have previously managed to get their hands on the trophy back in 2017, at Goswick GC.

And given Yorkshire’s record as the most successful county in the English Men’s County Championship, the Northern Division Champions will be keen to become just the fourth county to become multiple winners of the Seniors’ crown.

All three other counties are bidding to win the title – which was first competed for in 2005 at Gloucesterhire’s Minchinhampton GC – for the first time.

Since then the South East Champions have gone on to win the English county crown seven times.

Cheshire won three of the first four finals before Kent won five out of the next six – and remain the most successful county in the competition’s 14-year history.

Effingham should provide a stern test for the seniors after recent renovations to a course regularly used in the past for Regional Qualifying for The Open Championship.

The Surrey downland course, designed by Harry Colt, remains true to the original design with a few modernising tweaks and should test the mettle of the competitors.

The format for the championship is a round-robin with one match per day consisting of three foursomes and six singles games.

For live scoring from Effingham over the three days (October 8-10) click here.