By Andrew Griffin on 5th February 2020 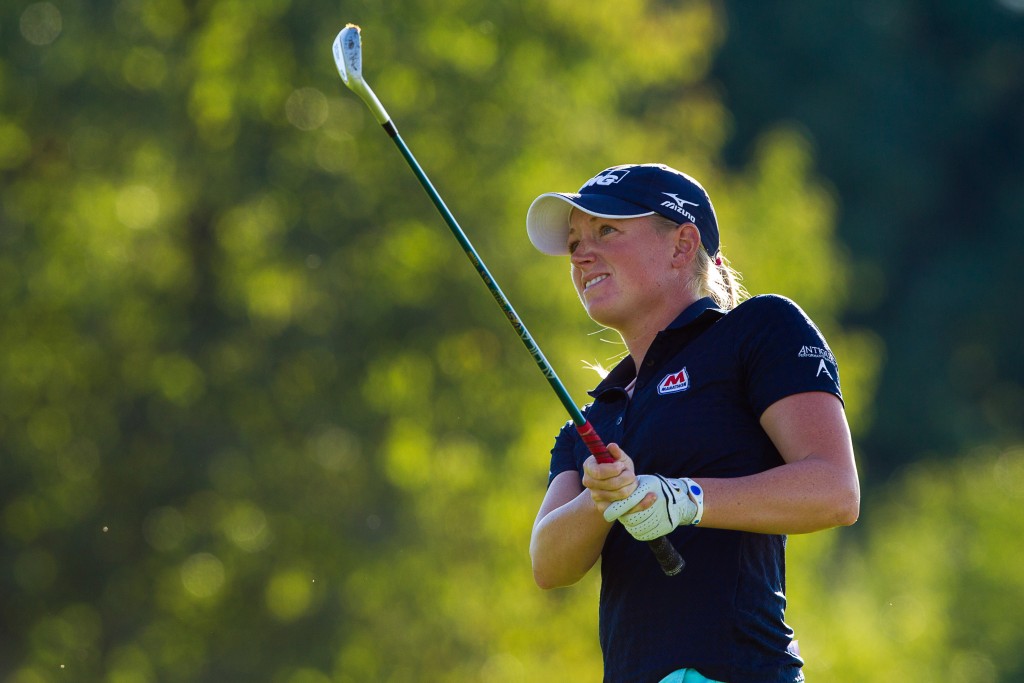 Stacy Lewis returns to Australia for the ISPS Handa Women’s Vic Open – her first trip Down Under since 2014, and two years after her maternity leave. Picture by TRISTAN JONES

TWO-time major champion Stacy Lewis last teed it up Down Under in 2014, when she tied for sixth at the ISPS Handa Women’s Australian Open.

It was the start of a season-of-a-lifetime for Lewis, who captured three victories and became the first American to take home all three season-ending awards since Betsy King in 1993.

Much has changed for Lewis since 2014, two years before her marriage to Gerrod Chadwell and four years before the birth of her daughter Chesnee.

It was never easy to make the 16-hour flight from the United States to Australia and leaving her family at home for two weeks made getting on that plane even more bittersweet.

Ever the competitor, Lewis knows that by doing her job on the golf course, she’s setting an example for Chesnee and the next generation of female golfers.

Stacy Lewis said: “My last concern at night is thinking about my golf score that day.

“Just helps put things in perspective of what’s important and kind of motivated me with my things off the golf course, kind of what I’m doing of trying to give more opportunities to women and to little girls.”

The young mum’s last win came at the 2017 Cambia Portland Classic before sitting out much of 2018 on maternity leave.

Lewis added “I want things to be better for my daughter and I don’t want her to have to answer the same questions that we’re talking about today.

In 2018, Stacy Lewis made headlines beyond the sports world when she announced KPMG – the professional services company that Lewis has represented since 2012 – was honoring her full contract through her maternity leave.

That moment sparked other companies to fulfill contracts through the recent LPGA Tour Baby Boom.

There are some 15 active Moms on Tour, with two players expecting in 2020 – and further heightened the value that Smucker’s brings to the Tour’s Child Development Center.

So it makes perfect sense that Lewis feels that this week’s ISPS Handa Vic Open – which has men and women competing together on the same courses for the same prize money – is a boon for sports equality.

“I hope this tournament sends a message across the world to let’s do more events like this,” said Lewis.

“I’ve had a lot of fun this week so far. I played a practice round with three guys yesterday and just doing it a little different than I normally do it.

“It just sends such a great message for supporting men’s and women’s golf.

“One of the guys I played with yesterday talked about how us coming on board has elevated their purse as well. So I think it’s a win-win for both tours.”

Australian Geoff Ogilvy has long met Stacy Lewis’ challenge to step up, having been an ambassador for gender equality in sports for years.

The 2006 US Open champion pointed to the 2014 US Opens, played back to back at Pinehurst No. 2, as a prime example of how men’s and women’s sports can co-exist.

Just talking about the consistency of players like Inbee Park and So Yeon Ryu brought a slightly jealous smile to the face of the 42-year-old with 12 wins around the world to his name.

“It’s more than just guys in the world who play golf or play sport. I’m a golf tragic, so when I come to a golf tournament, I’m watching other people play just as much as I’m playing myself,” said Ogilvy.

“This week I found last year all I wanted to do was watch the women and how they went about it.

“Some of them are just machines, they just don’t hit bad shots and they hit hybrids on to the green 10 feet all day.

“When I hit a hybrid, I’m happy to hit it within 30 yards of the green. It’s just a different style, said the three-time World Golf Championship winner.

“There’s something to be learned from both sides and there’s enjoyment in watching both styles of play,” added Ogilvy, who played in Europe for two years before progressing to the PGA Tour in 2001. 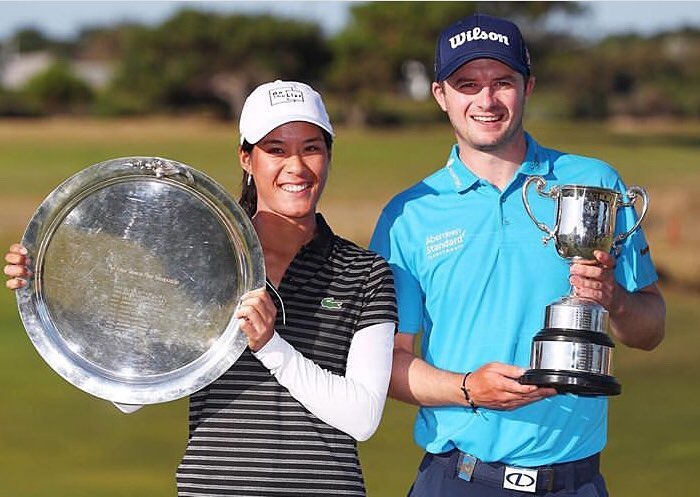 MORE events like the ISPS Handa Vic Open – which was won last year by Scotland’s David Law and France’s Celine Boutier – are indeed on the horizon.

In June, the European Tour and Ladies European Tour will host the inaugural Scandinavian Mixed hosted by Henrik Stenson and Annika Sorenstam.

It will feature 78 men and 78 women competing for one purse.

“I think going forward it could be a great model for companies that want to make sure that their money’s spent equally in sport,” said Webb.

“You can say that automatically if you have a men’s and women’s event for the same purse.

“You don’t have to justify that to your board or to your investors, you’re equally helping out men’s and women’s sport in one event.”

Why Karrie Webb is shifting her golf focus 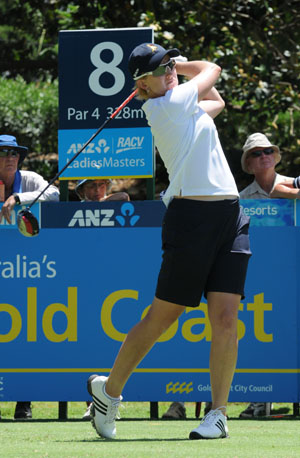 Karrie Webb is cutting back on her playing schedule to enjoy life more.
Picture by TRISTAN JONES

SEVEN-time major winner Karrie Webb admits that she’s slowing down as she moves into her mid-40s.

The 45-year-old Australian made just nine LPGA Tour starts in 2019, choosing instead to focus on family and friends back home in her native Queensland.

“I just didn’t have the heart to put in the full commitment that was needed,” said Webb, who has 41 LPGA victories to her name – more than any other current player.

“I felt like I was missing out on life by playing a full schedule. So it’s been a good mix of the both,” Webb added.

She has also invigorated her work on grassroots development programs with Golf Australia.

Since 2008, Webb has sponsored a scholarship program that brings Australia’s two leading female amateurs to the United States for a week to experience a major championship.

Perhaps the most fulfilling moment of that program came in 2019, when past scholarship recipient Hannah Green captured her first major title at the KPMG Women’s PGA Championship.

And it certainly seems that of all Webb’s major wins, she might treasure Green’s victory even more.

“My give-back to golf, this is greater than what I actually personally achieved because I think when I’m doing that, that isn’t about giving back to golf, that’s taking from golf and doing something that I personally set out to do,” said Webb.

“But my give-back for what golf has given me has been as rewarding, if not more rewarding.” 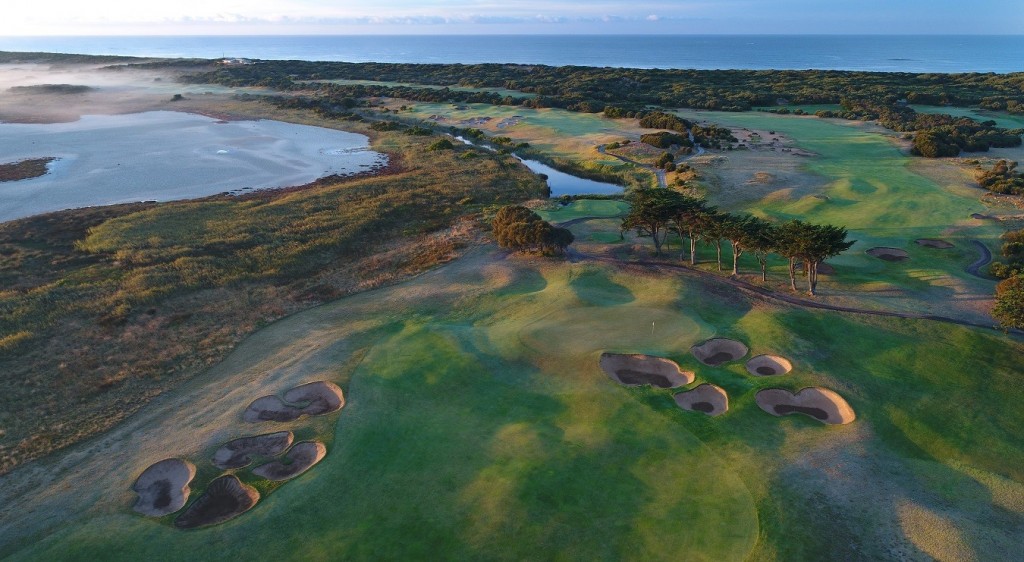 The 13th Beach Golf Links at Barwon Heads on the Bellarine Peninsula, is made up of the Beach and Creek Courses, which will stage this week’s ISPS Handa Vic Open

STAGED at 13th Beach Golf Links on Australia’s Bellarine Peninsula, men and women play on the same courses, at the same time, for equal prize money of $1.1 million.

For the second consecutive year, the ISPS Handa Vic Open is jointly sanctioned by the LPGA Tour, the ALPG, the European Tour and the ISPS Handa PGA Tour of Australasia.

A field of 144 men and 144 women – including Stacy Lewis – will play one round on each of the first two days across the Beach and Creek Courses.

After the second round, the field will be cut to the leading 60 players plus ties for both men and women.

A second cut will be made after the third round to the leading 35 players plus ties for both men and women.

The third and fourth rounds will be conducted on the Beach Course.

•For live scoring in the first round which gets under way on Wednesday night, on February 5, UK time click here.