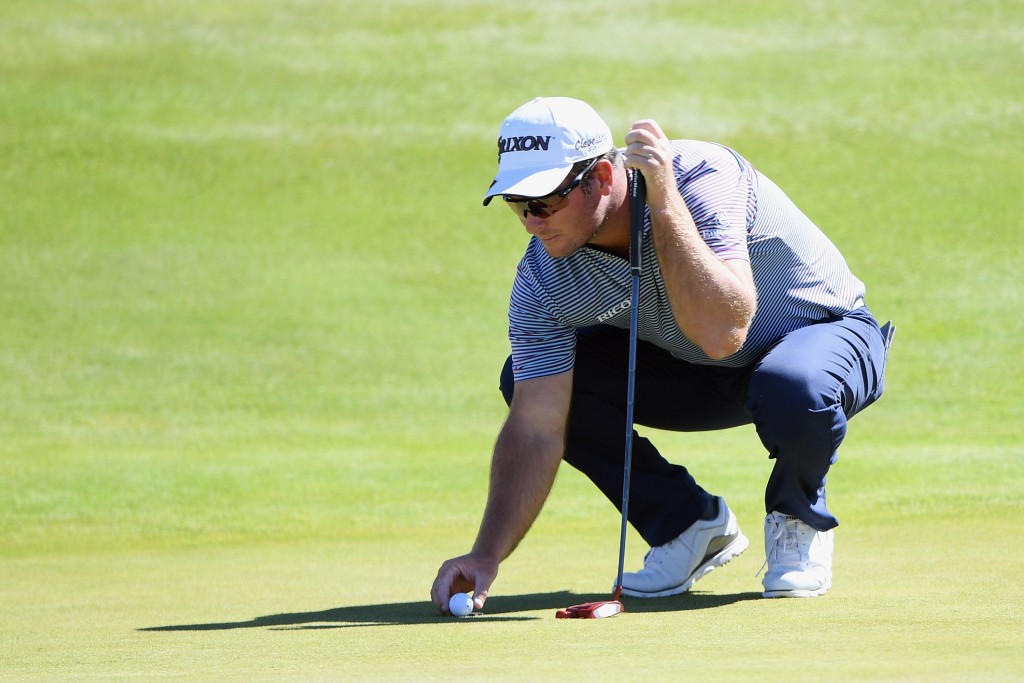 Ryan Fox has the chance to wrap up the PGA of Australia Order of Merit with a good finish to 2020 at the Australian PGA Championship at the Gold Coast’s RACV Royal Pines Resort. Picture by GETTY IMAGES

NEW Zealander Ryan Fox tees it up at the Australian PGA Championship this week – in a battle of the bombers – with his sights set on a strong start to his 2020 European Tour campaign.

The Kiwi is making his first European Tour appearance of the new season at RACV Royal Pines Resort on the Gold Coast.

Fox is hoping to carry his encouraging form from the end of 2019 into the new year.

The 32-year-old also leads the ISPS Handa PGA Tour of Australasia’s Order of Merit by AU$75,000, knowing that a strong performance this week would see him win the season-long rankings in the Southern Hemisphere.

Fox, who is officially the biggest hitters on the European Tour, said: “It has been a much nicer end to the year.

“If you take the Open out at Portrush, it was a very lean patch in the middle. I was pretty desperate there for a while, even when I came back from a break after the Open it was still a bit of a struggle.

“It was nice to find a bit of form in the back part of the season,” added Ryan Fox, who turned pro in 2012 and has three wins Down Under in total, as well two on the European Challenge Tour.

“Although I haven’t quite put it together, the last six or eight events there’s been some much better golf and a lot of positives to take out of that,” added Fox, whose maiden European Tour win came in the ISPS Handa World Super 6s in Perth, in February, which earned him AU$245,413.

“I’m in a pretty good position on the Australasian Tour money list, so it’s a chance to lock that up – that goes over a calendar year.

Fox added: “There’s a lot to play for this week. It’s a course I’ve played a lot, I know it fairly well and have had a couple of decent results in the past – so I’m looking forward to a good week.”

Fox will start this year’s tournament in the company of twice-defending champion Cameron Smith – fresh from playing in the President’s Cup team for Ernie Els’ Internationals at Royal Melbourne – and American starlet Cameron Champ – the latest big-hitter to come out of US college golf.

•For tee times in the first round of the Australian PGA click here.

Hill looks up to Rookie MacIntyre

LOOKING to build on an encouraging start to his rookie year on the European Tour, Scotland’s Challenge Tour graduate Calum Hill is teeing it up in Australia for the first time in his career, this week.

Hill will follow up results of 13th and T17th at the Alfred Dunhill Championship and AfrAsia Bank Mauritius Open respectively.

The Kircaldy-raised golfer will draw up the successes of Hero Indian Open winner Stephen Gallacher and David Law, who won the ISPS Handa Vic Open, in February. while Robert McIntyre, was named 2019 European Tour Rookie of the Year last month.

“I’ve never been to Australia before,” Hill admitted. “Coming here, I’ve had a great first impression, so I’m looking forward to getting started.

“I can’t complain with my start to the year. I had a chance in Mauritius but didn’t do well on the final day.

“As long as you can keep giving yourself chances throughout the year, I’m sure one of them will turn up,” added Hill, who won twice on the Challenge Tour in 2019, having graduated from Western New Mexico University, in 2016.

“It’s fantastic having a group of Scottish guys, with Stevie (Gallacher) as the experience and some of the younger guys coming through who are around my age too.

“To have Stevie win, Bob do great and Davey win, it’s good to see. My team are great at guiding me and showing me what I need to be doing.

“Of course the Rookie of the Year Award is on my mind, it has to be. If you’re not looking at that – especially coming from the same management group as Bob.

“You hope to achieve similar to what he has done, if that happens then you’re laughing. Fingers crossed.”

The 25-year-old, who is attached to Gleneagles, finished second on the Road to Mallorca rankings and is currently 16th on the 2020 Race to Dubai rankings.

Nicolai is ‘better than Rasmus’

BIDDING to follow in his brother’s footsteps as a European Tour winner is Nicolai Højgaard, whose twin Rasmus won the AfrAsia Bank Mauritius Open two weeks ago.

That victory saw Rasmus become the third-youngest winner in the Tour’s history at the age of just 18 years and 271 days.

That wn put him behind Italian Matteo Manassero, a winner at just 17, in 2009, and New Zealand’s Danny Lee, who was 18 when he won the 2009 Johnnie Walker Classic, in Perth, while still an amateur, in the European Tour history books.

The Højgaard twins represented Europe at the 2018 Junior Ryder Cup before turning professional at the start of 2019 – having helped Denmark win the Eisenhower Trophy at the 2018 World Amateur Team Championship.

If anything, Nicolai is regarded as the better player of the two, having risen to No. 5 in the World Amateur Golf Rankings.

Nicolai’s best result so far of his burgeoning European Tour career was a runner-up finish to Sergio Garcia at the KLM Open, in September.

Højgaard, who was unable to earn a full European Tour like Rasmus, at the Qualifying School, in November, said: “It would be cool to follow up my brother, but sometimes it just comes out of nowhere.

“I saw last season it can happen suddenly. I’m hoping for a good week here, I’m not focusing on the result. I’m trying to improve my golf – this is a kick-start to the season so it would be nice to have a good finish.

He admitted Rasmus winning was “a big motivator, for sure.”

Højgaard added: “I’m really happy for Rasmus, but I really want to do the same.

“I’m trying to not get carried away with his result and trying to focus a bit more on myself.

“If I finish second here, it’s still good. I don’t have to compare myself to him all the time. I’m happy for him, but hopefully I can follow that up this week.” 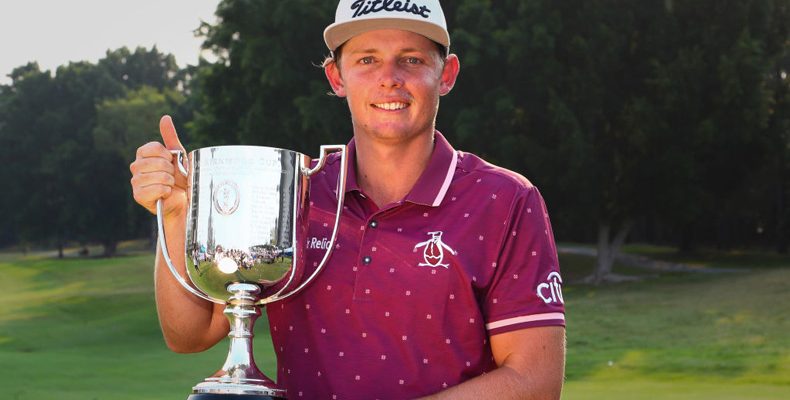 THE Australian PGA Championship is topping off a huge three weeks of golf in Australia – following the Emirates Australian Open and The Presidents Cup.

Gavin Kirkman, chief executive of the PGA of Australia, said: “The Australian PGA Championship has been embraced by the players and sports fans for its fun atmosphere.

“We feel it is important for it to be the final tournament of the year for us to deliver that experience expectation.”

The Australian PGA Championship week began with the Greg Norman Medal dinner on Tuesday night, where the highest achievers in the Australian golf industry were heralded for their accomplishments.

The fun continues with the MyGolf Kids Day on Wednesday, and the 16th Hole Marquee party.

Switching to a later date in the 2019 schedule has opened up the opportunity for people to enjoy Christmas celebrations at the golf tournament.

Additional festive activations have been added to the entertainment and corporate hospitality line-up in 2019.

While the ISPS HANDA PGA Tour of Australasia and European Tour players battle it out on course for the Joe Kirkwood Cup, the Australian PGA Order of Merit race will also come to a conclusion.

The winner of the Norman Von Nida Medal will be awarded following the Australian PGA Championship’s conclusion on Sunday night.

The ISPS Handa PGA Tour of Australasia Order of Merit provides a plethora of opportunities to the winner, including full status on the European Tour, a start at The Open – and entry into the World Golf Championship tournaments.

Kirkman added: “We have seen some thrilling conclusions to the Australian PGA Championship and the Order of Merit in recent years, and feel the atmosphere created on the Gold Coast is the perfect setting for them to be celebrated.

“This was one of the motivating factors in the change of date.”

When the 2019-20 schedule was originally released in the autumn of 2018, the 2019 Australian PGA Championship was set to be played from November 28 – December 1, until the switch to this week’s date was announced back in March.