By Andrew Griffin on 15th September 2019 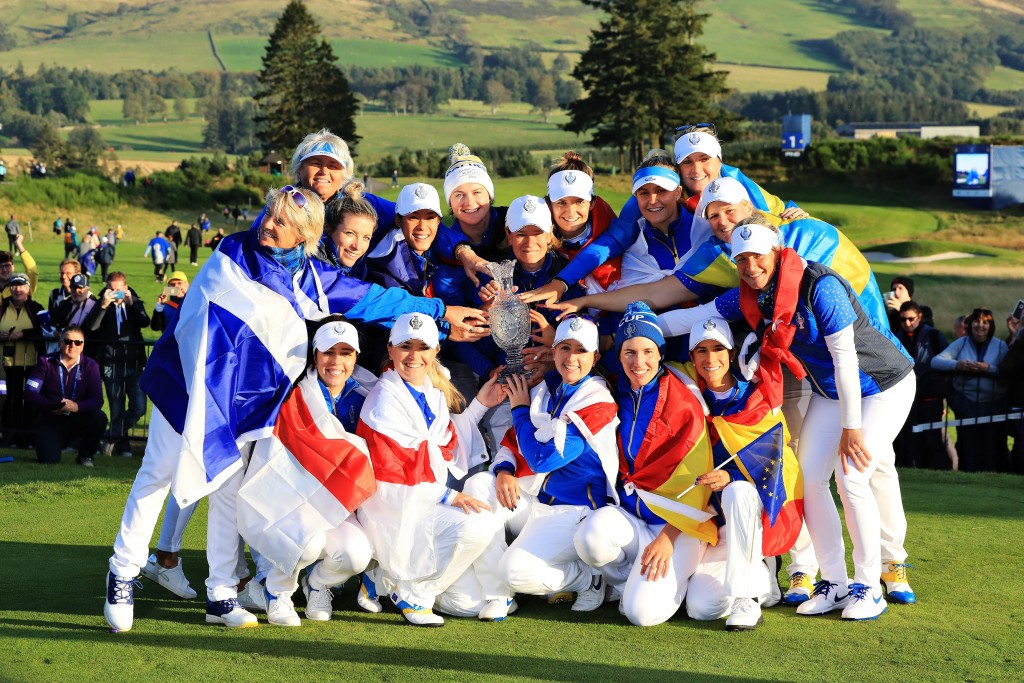 EUROPE won the Solheim Cup for the first time since 2013 after an incredible finish to the final day singles, as Suzann Pettersen holed the winning putt on the 18th to send thousands of fans into raptures.

Team USA looked set to retain the trophy needing just half a point from any of the final three matches… but Europe won all of them to secure a sensational victory with the last shot of the day.

With Sweden’s Anna Nordqvist closing out a 4&3 win over Morgan Pressel in the bottom game, and Yorkshire’s Bronte Law beating Ally McDonald 2&1 in the penultimate match, Pettersen and Marina Alex were stood on the 18th green with makeable putts for birdie.

Alex missed and Pettersen – one of captain Catriona Matthew’s wildcard picks – stepped up and rolled in an eight-footer to give Europe the point they needed to get to the all-important 14½ total.

All day the momentum swung either way, with Spain’s Carlota Ciganda beating Danielle Kang on the last in the top group, followed by Nelly Korda putting some red on the board with a two-hole win over Sweden’s Caroline Hedwall.

Devastating as a pair, Hall and Boutier showed they could produce the goods individually too as both secured their fourth point from four matches over the three days in Scotland.

The middle order matches all went America’s way and put them on the brink of a triumph which would have been Juli Inkster’s third in a row as captain.

First Angel Yin beat Spain’s Azahara Munoz in the fifth match, then Meghan Khang won the 18th hole to claim a half from Woburn’s Charley Hull.

Next up was Lizette Salas, who downed big-hitting Dutch ace Anne Van Dam by one hole.

And there were easy wins for Jessica Korda – 3&2 against Germany’s Caroline Masson, and rookie Brittany Altomare, 5&4 over Jodi Ewart Shadoff, the LPGA-based Yorkshire player.

Team USA, on 13½ points, were preparing to pop the champagne corks on the 18th green, but a dramatic finish then ensued as the final three Europeans completed a remarkable comeback that will live long in Solheim Cup history.

Two-time Major winner Pettersen – whose selection by Matthew last month raised eyebrows because of her lack of competitive action since having her son at the end of 2017 – struggled to hold back the emotion after winning the Solheim Cup for her team.

“Can you ask for more?” Pettersen said.  “The last putt to win the cup, when it’s that close? History was just made, to win here in front of the Scottish crowd, to be here most of all. I could never in a million years dream of this.

“I mean, to hole the winning putt, to win the cup… nothing beats the Solheim Cup in my career.

“I honestly didn’t know when I stood over the putt that that was to win it, said the 38-year-old winner of 15 events on the LPGA and seven times on the Ladies European Tour.

“It was left centre and I couldn’t have hit it any better. I’m on the best team ever,” added Petttersen, who played in two Junior Ryder Cups in the late 1990s and claimed the Girls’ Amateur Championship at Wiltshire’s High Post, in 1999.

USA captain Juli Inkster was philosophical after the narrow defeat – her first in three attempts – saying: “The Europeans played great. You tip your hat.

“We had a few tears. And I said ‘It’s okay.’ But the bottom line is we had a great week, the Europeans played great and we’re going to have a great party.

“The sun’s going to come up tomorrow. This will give them the fuel and fire for another two years to work at their game, to be on that team, to try to get that cup back.

“I just said, ‘Hold your heads up because you should not be disappointed’,” added Inkster, who won five of her nine Solheim Cups as a player.