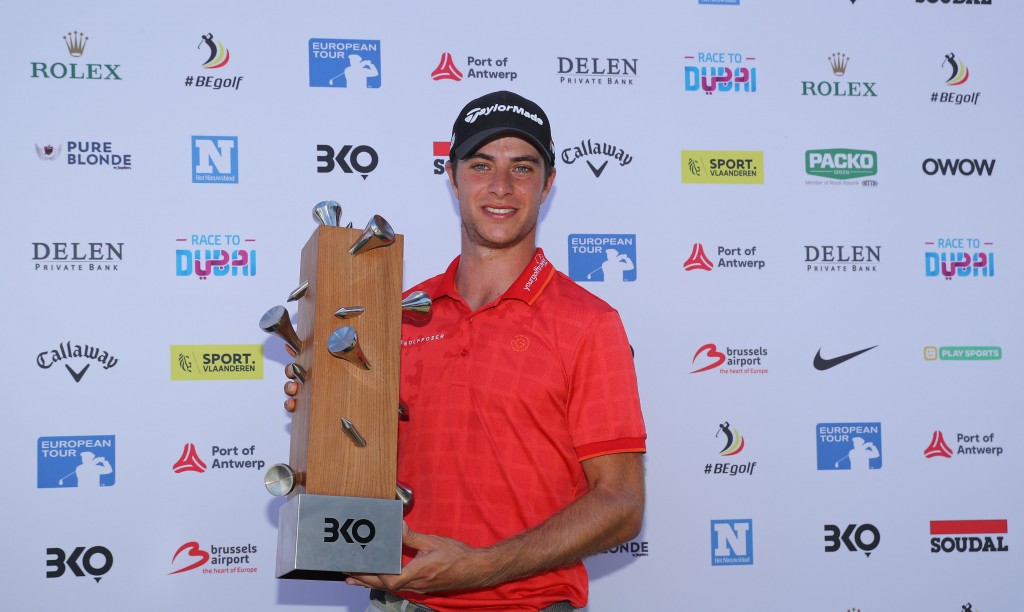 Guido Migliozzi added the Belgian Knockout to the Magical Kenya crown he won in March after beating Dutchman Darius van Driel in the final. Picture by GETTY IMAGES

GUIDO Migliozzi claimed his second European Tour win of the season with a four-shot victory over Darius van Driel in the final of the Belgian Knockout.

The Italian only came through the European Tour Qualifying School in November and now has two victories in just 20 events after his triumph at the Magical Kenya Open in March.

He laid down a marker on day four at Rinkven International Golf Club with a win over Bernd Wiesberger in his quarter-final and then defeated Scotsman Ewen Ferguson in the semis.

Migliozzi said: “I’m feeling very good. I managed very well this afternoon, all the shots. It’s been great playing like this with such great players. I’m playing solid and I will try to continue this quality in the future.

“He (Van Driel) played very solid, we played together on the Challenge Tour and it’s been a great match. He’s a good player.”

Van Driel beat Matthew Southgate and Grégory Havret en route to the final on Sunday in Antwerp but the Dutchman could not match Migliozzi’s three under par total.

Van Driel was not too downhearted after the defeat and said: “It’s a great week. Best birthday present it could possibly give me – except for the win of course.

“I knew he was long but you’ve got to hit it straight and that’s what he did on four out of the five holes. That put some pressure on me and forced me to make birdies. It didn’t happen but I gave it my all. He played great.”

The Dutchman admitted he was going to have consider his schedule even though he still sees his best way to earning a full tour card is via the top 15 on the Challenge Tour.

“My whole family is here so we’ll probably have some drinks and have dinner afterward.”

Ferguson, from Dunbartonshire, who held the 2013 British Boys, and the Scottish Boys and Scottish Boys Strokeplay at the same time, beat Havret by four shots in the play-off to claim third place ahead of the Frenchman.

The Bearsden GC member, who was playing in just his eighth European Tour start earned £55,000, is managed by the same Modest! Golf management group run by One Direction star Niall Horan.

In the second staging of the Belgian Knockout – with its innovative format of 36 holes of strokeplay before the top 64 play six rounds of medal matchplay over nine holes over the weekend – Migliozzi finished in a tie for fifth in section A on Friday.

He then beat two Spaniards in Pedro Oriol and defending champion Adrian Otaegui before knocking out Scotsman David Law in his first three matches.

The victory moves Migliozzi to 21st on the Race to Dubai Rankings, into the top 100 on the Official World Golf Ranking, and makes him the second 2018 Qualifying School graduate to win twice on the 2019 Race to Dubai after American Kurt Kitayama.