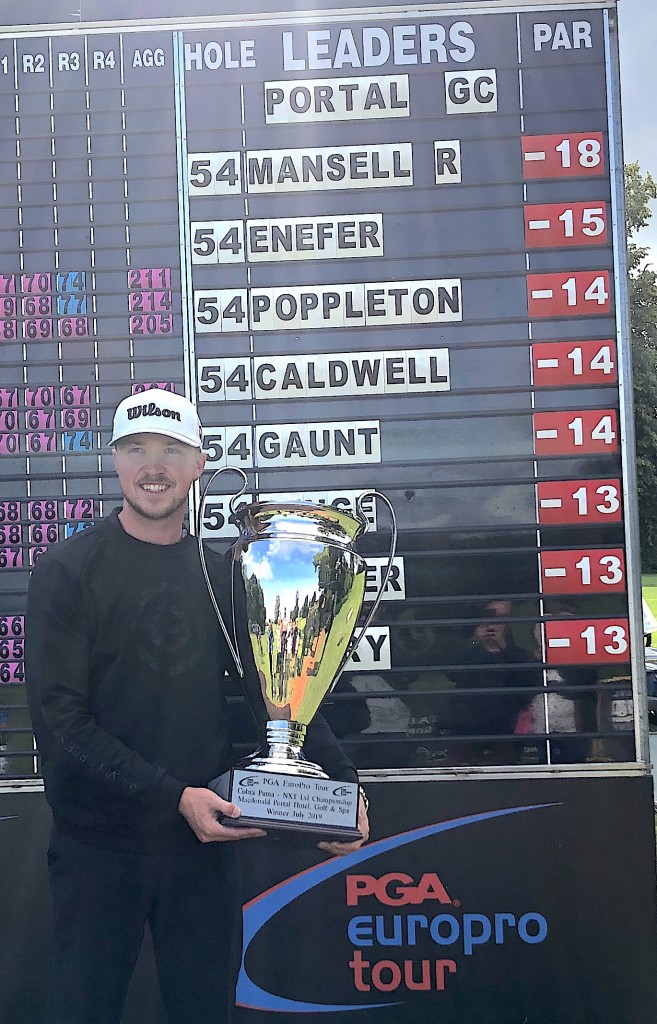 Richard Mansell, who won the Cobra Puma NXT LVL Championship at MacDonald Portal Hotel, Golf and Spa, and dedicated his win to friend and sometime caddy Charlie, who suffered a brain haemorrhage and has been left seriously ill in hospital

RICHARD Mansell has won the Cobra Puma NXT LVL Championship by three shots with a final round 69 at MacDonald Portal Hotel, Golf and Spa.

The Beau Desert golfer started the day one shot behind overnight leader Marco Penge, but the Staffordshire ace assumed the lead with a birdie at the opening hole as Penge, from Golf at Goodwood, three-putted for bogey.

Mansell only briefly slipped out of top spot on a tense final day with a double-bogey at the par-five seventh, but he reassumed control of the tournament with a spectacular pitch-in for eagle two holes later.

Mansell – who raised £4,500 last month for a friend who suffered a massive brain haemorrhage – maintained pole position throughout the back nine with birdies at 10, 12 and 17, signing for a closing 69 and a total of 18-under – and then dedicated the win to his friend.

“I did this for my friend Charlie, whose been fighting for his life in hospital,” said an emotional Mansell. “He’s been the 15th club in my bag over the last few weeks. This feels really special.”

A special day indeed for Mansell, who’s previously recorded three runners-up finishes in his season-and-a-half on the PGA EuroPro Tour, and had his parents and friends on hand in Cheshire to witness his first victory.

Will Enefer, a Cobra Puma NXT LVL academy player from Shropshire, surged through the field with a 67 to claim second place on his own.

Clandeboye’s Jonathan Caldwell, from Ireland, and Wath’s Nicholas Poppleton tied for third on 14-under, while overnight leader Penge – a former England U16 Boys Champion – had to settle for a four-way tie for fifth after a two-over par final round.

Mansell, who shot a 58 three years ago while at Nova SouthEastern University in Florida and was signed up as an amabassador for Ted Baker Golf when he turned pro, leaped six spots to third in the Race to Desert Springs, while Enefer is up to 10th.

Kent’s Alfie Plant, who finished tied 14th at Portal, held on to top spot in the Order of Merit, while last week’s winner Andrew Wilson, who took the week off in preparation for the Rockliffe Hall pro’s Open Championship debut next week at Royal Portrush, remains in second.

Visit www.europrotour.com for more information and to see the final leaderboard.

•Mansell was joined by fellow PGA EuroPro player Joe Brooks in their fundraising efforts to help Charlie, who suffered the haemorrhage in the left side of his brain.

Mansell met Charlie nine years ago at the European Father and Sons Championship – and they’ve been close friends ever since.

Charlie caddied for Richard at the first stage of European Tour Qualifying School last year and successfully made it through. Brooks played with Charlie at junior level.

In little over three days, the event was organised and funds raised to help Charlie who had been unconsciousness in hospital.

The pair took on 100 holes at Beau Desert Golf Club last month taking alternate shots as a two-ball to complete it in just over 14-and-a-half-hours.

Mansell explained Charlie’s whole right side of the body had been left paralysed after the haemorrhage occurred in the part of the brain that controls understanding and speech.

Funds raised have been helping Charlie’s parents visit him in hospital.

“They shouldn’t have to think about money at a time like this and it just proves how important life is – and none of us know what is around the corner.”

“He’s just one of them people who brings life to the room and is impossible not to love. He’s always smiling and I want to help get that smile back on his face as soon as possible.”

Mansell said the tragedy had given him perspective on life, adding: “I’ve been guilty in the past – like 99 per cent of the golfers I know – for moaning when we hit bad shots, getting down and acting like it’s the end of the world when we miss a five-footer for par.”

“In reality, it isn’t and this has been a massive reality check for me. What Charlie and his family are going through is real life and it shows how we need to not take any day or moment of time for granted – as we don’t know what’s around the corner.”

A spokesman said: “The PGA EuroPro Tour thoughts and prayers are with Charlie and his family and friends. The tour sends our best wishes in his recovery. ”

As of this week nearly £6,000 has been raised to help Charlie’s family.

•For more information on Charlie’s condition and updates can be found on the GoFundMe donation page.