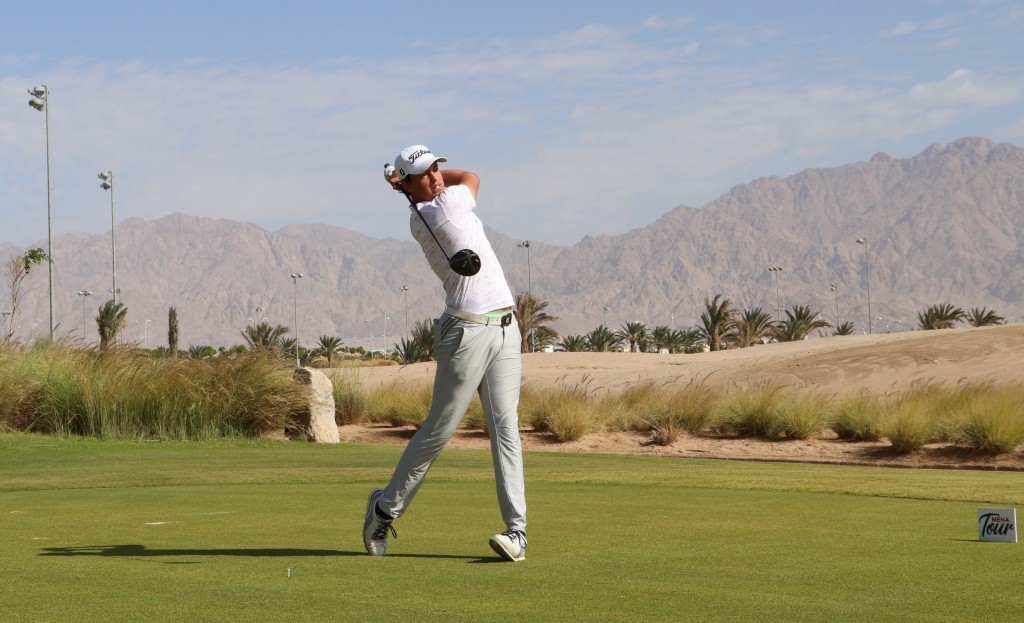 DUBAI-born amateur Josh Hill is in sight of a second MENA Tour title after taking a one-shot lead into the final round of the $100,000 Journey To Jordan Tour Championship.

At the Greg Norman-designed Ayla Golf Club, in Aqaba, Hill carded a second-round 69.

His three-under par score took his tally to nine-under – one ahead of Harry Konig (65), Hertfordshire’s Jamie Rutherford (67), Joshua Grenville-Wood (70) and Sweden’s Gabriel Axell (70).

All four professionals are looking for their first win on the MENA Tour.

Fifteen-year-old Hill, who beat the record of Japan’s Ryo Ishikawa to become the youngest winner of an OWGR-recognised event last month at the Al Ain Open, got off to a hot start after his first round of 66 on Tuesday had left him in a three-way tie in first place.

Hill was four-under through seven holes in round two, and even though his ball-striking deserted him a touch on the back nine, he managed to make enough birdies to offset his mistakes.

“I was doing everything so well for the first seven holes, and then made a stupid bogey on the ninth,” said Hill.

“I struggled a bit after that but am delighted to finish at three-under on a tough day.

“I made a three-putt bogey on the 12th hole, but apart from that, I putted really well, and that really saved the day,” added Hill, who made seven birdies before ending with a bogey on 18th.

Hill felt the experience of his Al Ain Open win – when he started the final day three shots behind leader Harry Ellis, Hampshire’s Amateur Champion in 2017 – will help him as he dons the role of a front-runner.

“It will be a different challenge and I think what would definitely help is if I get off to a good start like I did in Al Ain,” said the England Boys international.

“But that win proved to me that I have what it takes to win a tournament at this level and that would be a good, positive thought in my mind,” Hill added.

Sweden’s Henric Sturehed, winner of the MENA Tour Championship when it was last played in 2017, shot a two-under par 70 to take solo sixth place, while Luke Joy stayed in touch with a 71 that left him the seventh place.

South Africa’s MG Keyser, the leader of the Journey to Jordan order of merit, is on four-under after a 71.

But with his nearest challengers º Australia’s Daniel Gaunt (73) and Essex’s James Allan (72) – not making any significant move up the leaderboard, he looks on course to win the professionals’ prize on the Journey To Jordan.

Konig said he was “plodding” along and made some good up-and-downs until he decided to get aggressive on the back nine.

The move paid rich dividends as he finished with five birdies in his last six holes to shoot the low round of the day.

Konig said: “I missed making a birdie on the par-five17th hole, where I missed a putt from five feet.

“That was slightly disappointing, but I did make a birdie on the 18th which was playing very tough in this wind. I think it is the first time I have made a birdie on that hole.”

“I did not putt well at all that day in Spain and it was very disappointing. I went back home and mostly did putting for two weeks before coming here,” said the Knebworth GC member.

“In a sense, it is good that I had this tournament to play and an opportunity to bounce right back,” said the former England amateur international.

Axell, who lost in a play-off at the Ras Al Khaimah Open in October, will try and make amends in Thursday’s final round.

“It’s never good to finish with a bogey, but it wasn’t easy out there,” said Axell.

“However, I am playing some good golf and there is no reason why I should not finish one better than what I did at Ras Al Khaimah,” said the Swede, who made three birdies in a row before the turn.

Grenville-Wood, who finished second in Bahrain earlier this year, said: “It was a grind out there, especially on the back nine.

“I am pretty pleased with the way I kept it going and kept hitting steady shots. I made a pretty good par on the 18th. So, one shot back, I will take it.”

Grenville-Wood, who played two European Challenge Tour events this season by virtue of his performances on the MENA Tour, has been flying the flag for ADHD sufferers.

He was chosen as an ambassador for the UK’s ADHD Foundation supporting kids who struggle from the condition earlier this year.

The 21-year-old, who was educated in States but also played golf in England as a junior is based in Hampshire while in the UK, and has played more than 500 tournaments as a junior on both sides of the Atlantic.

Grenville-Wood has also played on the Jamega and PGA EuroPro Tour since turning pro in 2017.

•For live scoring from the final round of the MEN Tour Championship click here.