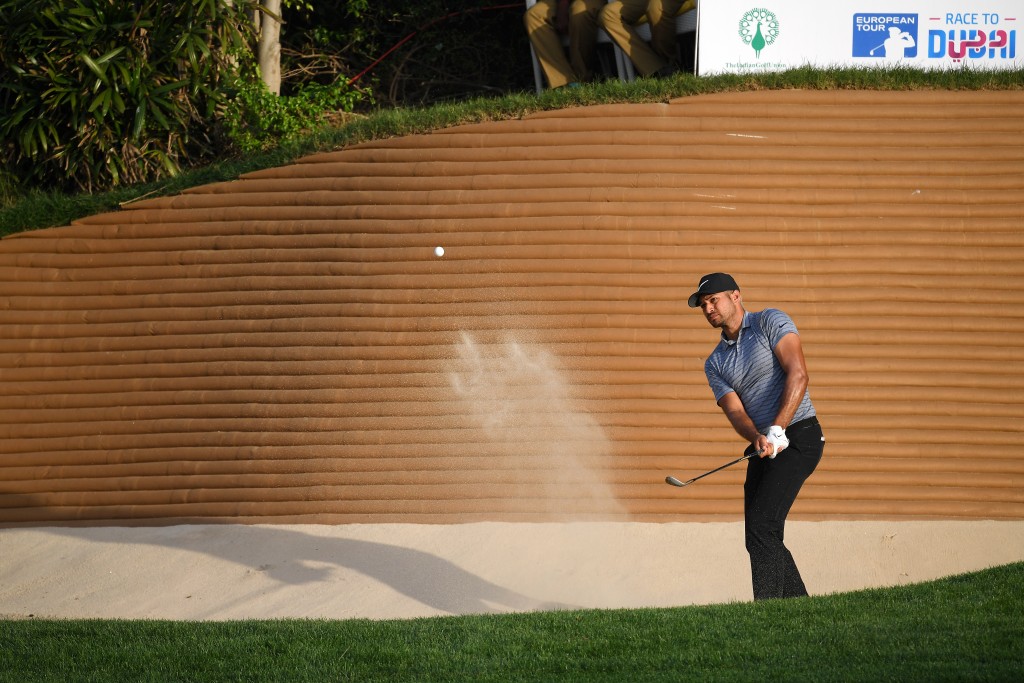 New Yorker Julian Suri who produced a superb chip on the par five 18th to tie Stephen Gallacher at five-under in the Hero Indian Open. Picture by GETTY IMAGES

SCOTLAND’S Stephen Gallacher and Julian Suri fired opening rounds of 67 to take a share of the first round lead at the Hero Indian Open.

Gallacher has often flourished on tough courses throughout his career, and showed he had the measure of DLF Golf and Country Club last season as he recorded a top 10 finish in New Delhi.

Fast forward 12 months and a sensational putt from off the green at the last handed the Scot a closing eagle and a one shot advantage at five-under.

It looked for a long time like he would not be caught in the afternoon but American Suri – who missed the cut in his only appearance here last season – produced some magic of his own on the 18th.

He played a sublime bunker shot to set up a closing birdie and join Gallacher at the summit.

Last week’s winner in Malaysia, Scott Hend, and local hero Shubhankar Sharma are in a nine-man group two shots off the lead.

Stephen Gallacher, a member of Europe’s winning Ryder Cup team at Gleneagles, in 2014, said: “It was a perfect morning.

“Cool to start with and then it heated up later on in the round, and not too much wind, so it was perfect today.

“I think you have to get it in play off the tee, there is just so much trouble.

“I think if you get the tee shot in place you can hit a couple of nice iron shots and take advantage of the par fours that are quite short, drive a couple, and knock it onto the par fives.

“It is quite a strategic course. I don’t think you need to be the longest player on the tour to play it, I think you’ve just got to plot your way around it.

“I have started poorly to be honest, I’ve had a sort of big miss in the bag that has been costing me triples and doubles, so hopefully, I knew I was close last week, I played lovely but just didn’t get anything out of it.

“But coming back to a place where I’ve played well hopefully I can draw on some inspiration from last year.”

Suri, who made his maiden breakthrough at last year’s Made in Denmark tournament, said: “It was a good day.

“My caddie Dermot, he keeps encouraging me and calls me the Greatest Showman sometimes after the movie, so I had to give him a little show there.

“I got the all clear about four or five weeks ago from the doc and last week in Malaysia was my first event,” said the 27-year-old who had surgery on a hernia in January.

“With the heat there and all the conditions, the body felt great and the swing felt good too.

“It’s a great test. It’s very dramatic and provokes the imagination a little bit so I enjoy it,” said the New Yorker, whose exquisite chip on the last set up a simple birdie four to tie the leader.

Spaniard Larrazabal, who finished fourth last year four shots behind Hertfordshire’s Matt Wallace, who beat Middlesex’s Andrew “Beef ”Johnston in a play-off, said: “The conditions were perfect and this is a great golf course.

“If you hit alright from the tee, or out it in the short grass then it’s not that long, and the greens as good as they are you can hole putts.

“I like great golf course and I love to putt on good greens, and these are probably the best of the season with Abu Dhabi, so I just try to keep working.

“I didn’t play my best today from the tee, but I allowed myself to keep the ball alive and not put myself into too much trouble and trying to make birdies when I can.

Robert Karlsson, who was crowned European No. 1 back in 2008 – but has suffered a series of injuries since – said: “This is one of the most brutal golf courses I have ever played.

“Any slight miss and it’s trouble. It is a fabulous week to be here and definitely one of the best courses we play condition wise that is going to test where you are.”

Forty-nine-year-old Karlsson, playing in his 613 European Tour event, lit up his round with eagles at the par four seventh and the par five eight.

The Swede, who has won 11 times in his career and appeared in two Ryder Cups, said of his two on the sixth: “It was one of those things, I just got this feeling over the wedge.

“I saw Dean Burmester hit it just right of the flag, and thought this is the perfect distance for me, and when I was over the ball I thought ‘this could go in’ and when it when in I was like ‘yep’.

“So that happens sometimes. It’s not easy but it was just one of those shots.

“Eight I played really well, hit a driver and six-iron to the back, and chipped it in from probably 25 feet, so that was great.

“I don’t think I have ever done two eagles in a row, I have done two in a round but not two back-to-back so that’s pretty cool.”

There was still one group left out on the course so the first round will be completed early on Friday morning.

•For live scoring from the second round of the Hero Indian Open, click here.