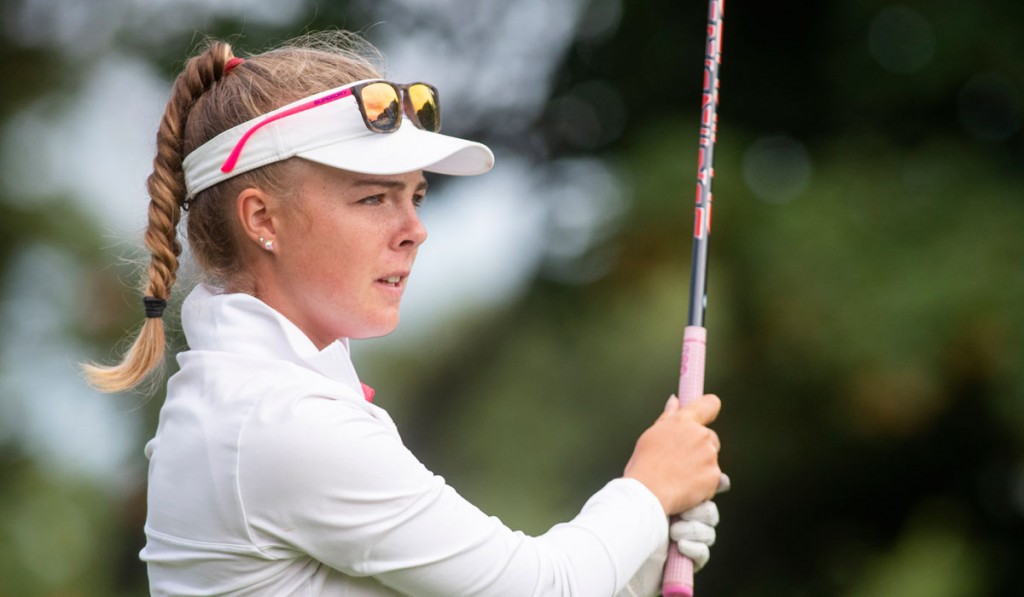 Whitley Bay’s Rosie Belsham, winner of the Fairhaven Trophy, has been picked for the England squad who will travel to St Leon Rot for the German Boys and Girls Championships in June. Picture by LEADERBOARD PHOTOGRAPHY

RECENT winners Rosie Belsham, Lily May Humphreys and Callum Macfie will spearhead the England challenge in the German Boys’ and Girls’ Open at St Leon-Rot, at the end of this month.

They are among eight players who will represent England in the 54-hole event at the club which hosted the 2015 Solheim Cup.

Essex’s Lily May Humphreys, completed the Irish and Welsh Open Strokeplay double over consecutive weekends earlier this month, adding them to previous wins in English, Scottish, British and European championships.

Whitley Bay’s Belsham won the girls’ title at the Fairhaven Trophy earlier this month, with a record-setting total of 23-under par.

The 17-year-old Northumbrian’s score was the lowest gross ever-recorded in the competition, beating the best boys’ score by four and the best girls’ by 11.

Fellow Fairhaven Trophy winner Callum Macfie, from Lindrick, took the boys’ title with a seven-under total. The 18-year-old – a past winner of the North of England U16 title – represented England at U16 level. He has twice helped Yorkshire win the English Boys’ County Finals title.

Huddersfield’s Charlotte Heath, who is also 17, was fourth at the Welsh Open Strokeplay.

She won the 2018 Sir Henry Cooper Junior Masters at Nizels GC, and was in England’s winning team at last year’s Girls’ Home Internationals, at Ballybunion.

Somerset’s Mimi Rhodes was also in that team and represented England in the World Juniors Girls’ Championship at Ottawa, in Canada.

Rhodes was runner-up in the French Women’s Strokeplay and fifth in the 2018 Annika Invitational Europe, at Stockholm’s Royal Drottingholm GC.

Walton Heath’s Enrique Dimayuga tied fourth in the strokeplay stages of the French Boys’ Championship and reached the last 16 in the matchplay.He was 10th in the Hampshire Salver back in April.

He was in England’s winning team at the Boys’ Home Internationals at Royal Dornoch, in Scotland.

Prestbury’s Remy Miller tied fifth in the Fairhaven and had top 15 finishes in the Peter McEvoy Trophy and the Scottish Boys’ Championship.

The 17-year-old Cheshire teenager has represented England at U16 level, helping to defeat Scotland at Montrose, in October 2017.

ST LEON ROT was the regular host of the Deutsche Bank – SAP Open TPC of Europe over a five year period.

St Leon Rot also hosted the 2015 Solheim Cup when the USA claimed the women’s equivalent to the Ryder Cup, coming back from 10-6 down in what was the closest result in the biennial clash’s history.

But only after their 14½-13½ triumph was overshadowed by controversy over a putt that Norway’s Suzann Pettersen insisted had not been conceded.

The club was founded in 1997 by SAP co-founder Dietmar Hopp. The two 18 hole courses are called St Leon and Rot.