By Andrew Griffin on 6th September 2019 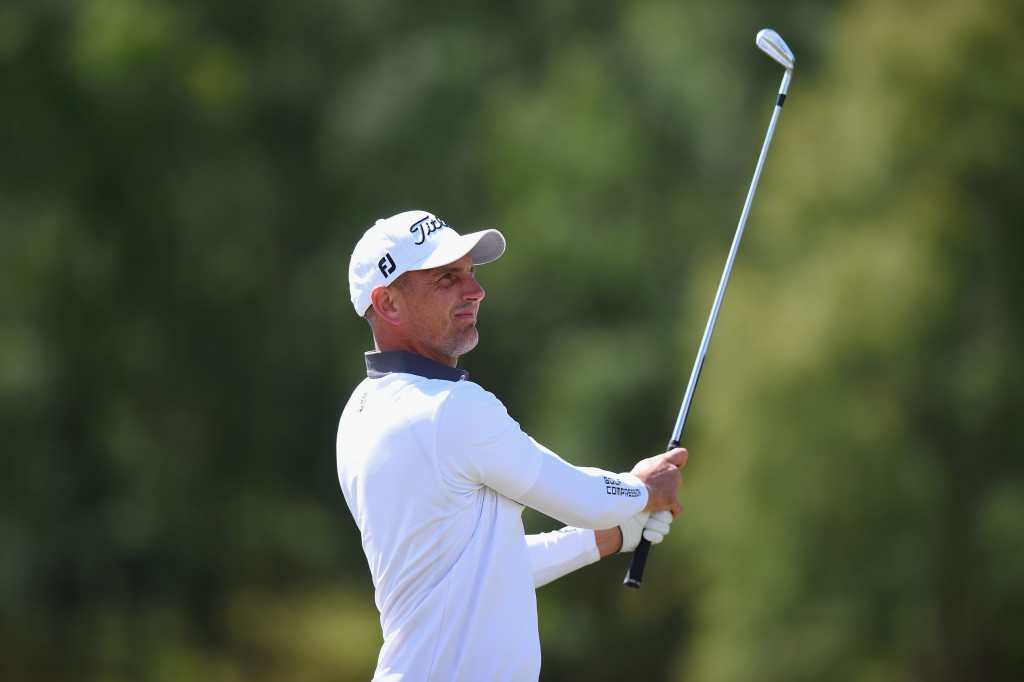 Barnard Castle’s Robert Dinwiddie battled windy conditions to lead after the first round of the Bretagne Open, in France, Picture by GETTY IMAGES

The 36-year-old, who is attached to The Richmond Golf Club, in south-west London, carded an opening round of four-under par 66 in just his second Challenge Tour start of the season.

That saw him finish one shot clear of Icelandic duo Gudmundur Kristjansson and Birgir Hafthorsson.

The Durham golfer, who was born over the border in Dumfries, birdied three of his last six holes to move into the lead on a day where strong winds pummeled the seaside venue.

Runner-up at the 2013 edition of the tournament, Dinwiddie has made the most of his limited starts this season, finishing in the top 20 at his only other Challenge Tour appearance, the Hauts de France – Pas de Calais Golf Open.

His four-under total is the highest first round lead at a Challenge Tour event this year, and only 16 of the 156-man field broke par as sustained winds blew across the firm and fast venue throughout the day.

‘’I played really well, it’s nice to be back out playing,” said Dinwiddie, who became the first-ever amateur to hold the English, Welsh and Scottish Strokeplay amateur titles at the same time after claiming the Brabazon Trophy in 2006, after winning the other two in 2005.

“I putted really well out there and holed solid putts on six, seven and eight to finish it off nicely, so overall, I’m really happy with my performance out there,” added the former Tennessee State University player, who was a member at Barnard Castle in the North East as an amateur.

‘’I got just about everything I could out of my round today. I haven’t been able to play many Challenge Tour events because of my ranking, but I feel like my game’s in a good place.

“I haven’t been able to put my game under this kind of scrutiny at this level for a while, so I’m happy I was able to hold it together – and I’m hopeful I can continue this form over the next few days,” said Dinwiddie, who took break from the game in 2012 and spent a few months windsurfing in Thailand to recharge his batteries.

Meanwhile, experience also paid off for Hafthorsson, who clinched the first, and still only, win by an Icelander on the Challenge Tour at the 2017 Open de Bretagne.

Teeing up only his third Challenge Tour start this season, the former champion carded five birdies and two bogeys to sit one back on three-under.

Looking to add to the Icelandic win tally as well is Kristjansson, who is searching for his maiden Challenge Tour victory following a successful stretch playing on the Nordic Golf League.

Starting in the first group of the day, the 26-year-old carded the best score of the morning wave, a three-under 67, which included six birdies and three bogeys, as many of the early starters struggled to break par.

Frederic Lacroix is the leading French player after an opening round of 68 left him in a tie for fifth, with local amateur and Monday qualifier Victor Joffray sitting a shot further back.

Dinwiddie begins his second round tomorrow at 7.50am, with Hafthorsson getting under way at 8.30am and Kristjansson teeing off at 12pm.

For live scoring in the second round click here.