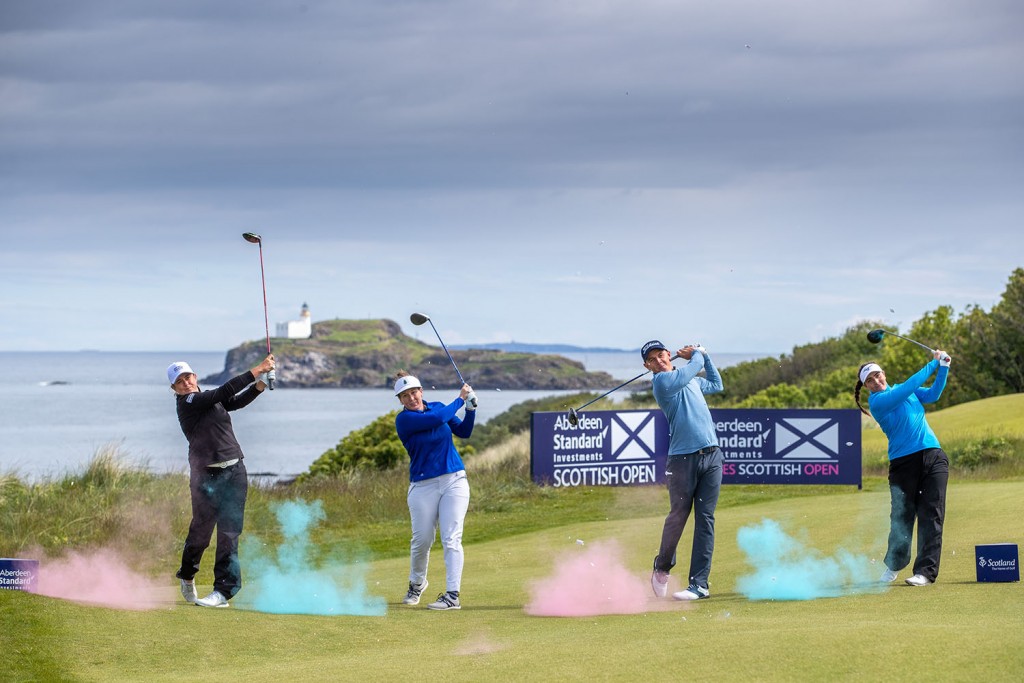 The tournament, which is co-sanctioned by the LPGA and Ladies European Tour for the third year running, visits The Renaissance Club for the first time in 2019, just three weeks after the Men’s Scottish Open and is set to feature at least five local hopes.

Matthew, who lives in nearby North Berwick, is a two-time winner of the tournament and will be making her ninth appearance in her National open whilst Kelsey Macdonald also tees it up for the ninth time with her best finish coming in 2016 (T19).

Thomson, who enters as the second-highest ranked Scot in the 2019 LET Order of Merit, is joined by Pamela Pretswell Asher, who returns after 20 months on the side-lines following the birth of her first child and will be looking to re-create the form that saw her finish in fourth place in 2013.

Joining them as an honorary Scot for the day and taking part in an exploding golf ball stunt was Beth Allen. The American, who captured the 2016 Ladies European Tour Order of Merit and ‘Player of the Year’ spoils, might hail from California but she has deep-seated Scottish ties having resided in Edinburgh for the last three years.

“I just love this place, Scotland is so magical” said Allen, who is also an Aberdeen Standard Investments ambassador. “Everything about Scottish golf gets me excited. I grew up playing in San Diego where you have to hit it high so playing in Scotland is a very different challenge but one that I enjoy. This will be my eighth consecutive appearance in this event and I’ll be hoping to use some of my knowledge of the area to my advantage this summer.”

The group of players are the latest to confirm participation in the 156-player field, competing for $1.5 million following the confirmation of defending champion Ariya Jutanugarn and reigning Women’s British Open champion, Georgia Hall.

Commenting on the day, Pretswell Asher, said, “It feels good to be back in the golfing fold. The last six months with my daughter Kirsty have been amazing but it feels exciting to be back in familiar territory and I am looking forward to competing against the best players in Scotland and some of the best in the world. I watched last year’s event on the TV and it was scary to see just how good some of the play was. It definitely motivated me to get my game back in good shape to compete this year. The tournament continues to grow and that is testament to the commitment from Aberdeen Standard Investments and Visit Scotland, who help put the spotlight on women’s golf here in Scotland.

Martin Gilbert, Chairman of Aberdeen Standard Investments, said, “I have watched this tournament grow from a National open to what it is today, a world-class golf event. Throughout that growth, we have always maintained the importance of recognising local talent and providing a platform for Scottish players to compete on a major golfing stage. This event is a great opportunity for all involved in our media day to showcase their ability to the world and we hope the Scottish fans get behind them at The Renaissance Club this summer.”

Paul Bush, Director of Events with VisitScotland, said, “We are delighted to support our home-grown talent at the Aberdeen Standard Investments Ladies Scottish Open.which is now considered a truly world-class event. It will be interesting to see if any of the Scottish talent here today can do something to turn the head of European Solheim Cup captain, Catriona Matthew, who has been a fantastic ambassador for Scottish golf over the last twenty years.”

The 2019 Aberdeen Standard Investments Ladies Scottish Open is FREE ENTRY with fun for all the family both on the course and within the spectator village.