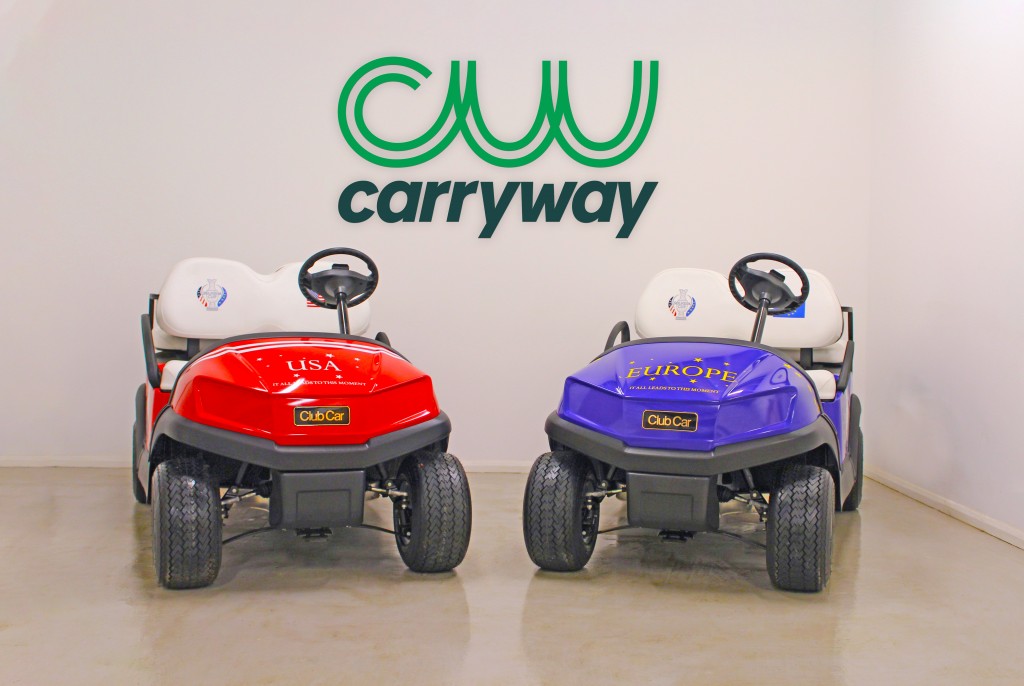 Scotland, 3 May 2019 – Carryway, an Official Supplier to The 2019 Solheim Cup, today unveiled the Captains’ Cars, the golf buggies which will be driven by the Team Captains at Gleneagles in September.

Catriona Matthew and Juli Inkster, who will lead the European and American teams respectively, will be cruising around the PGA Centenary Course in style in their custom-made Club Car buggies designed in traditional Solheim Cup colours.

For more than 15 years, Carryway have partnered with Club Car, the world’s leading manufacturer in golf buggies, offering petrol and electric vehicles to the UK golf industry. Carryway will be responsible for the coordination, delivery and support activities related to the supply of more than 200 Club Car golf and Club Car utility vehicles at The Solheim Cup. The fleet will consist of 14 team buggies for players and caddies, and the bulk of the vehicles will offer transport solutions to the vital support teams.

Carryway’s Club Car golf buggies are a vital cog in the large operations wheel that is a world-class sporting event, where around 100,000 spectators are expected, and will ensure teams such as Security, Medical, Support and Media can get around Gleneagles efficiently.

Sarah Black, Managing Director, Carryway (MTS Group), said: “Carryway are delighted to be providing its Club Car golf buggies and utility vehicles to The Solheim Cup at Gleneagles. Without a doubt the tournament will be one of the biggest sporting events of 2019 and we can’t wait to see our event fleet in action both on the course and behind the scenes.”

Ross Hallett, Senior Vice President, Golf, IMG Events, said: “We are thrilled to have Carryway on board as an Official Supplier for The 2019 Solheim Cup. They are the best in the business and have a huge depth of experience in providing golf vehicles at large-scale events.

“The Captains’ Cars look fantastic and we can’t wait to see them in action with the captains and teams at Gleneagles in a few months’ time.”

In the build-up to the event, the Captains’ Cars will go on a tour of the UK, appearing at prestigious sporting events such as the AIG Women’s British Open at Woburn in August.

The full list of 2019 Solheim Cup partners, sponsors and suppliers: