By Andrew Griffin on 6th December 2019 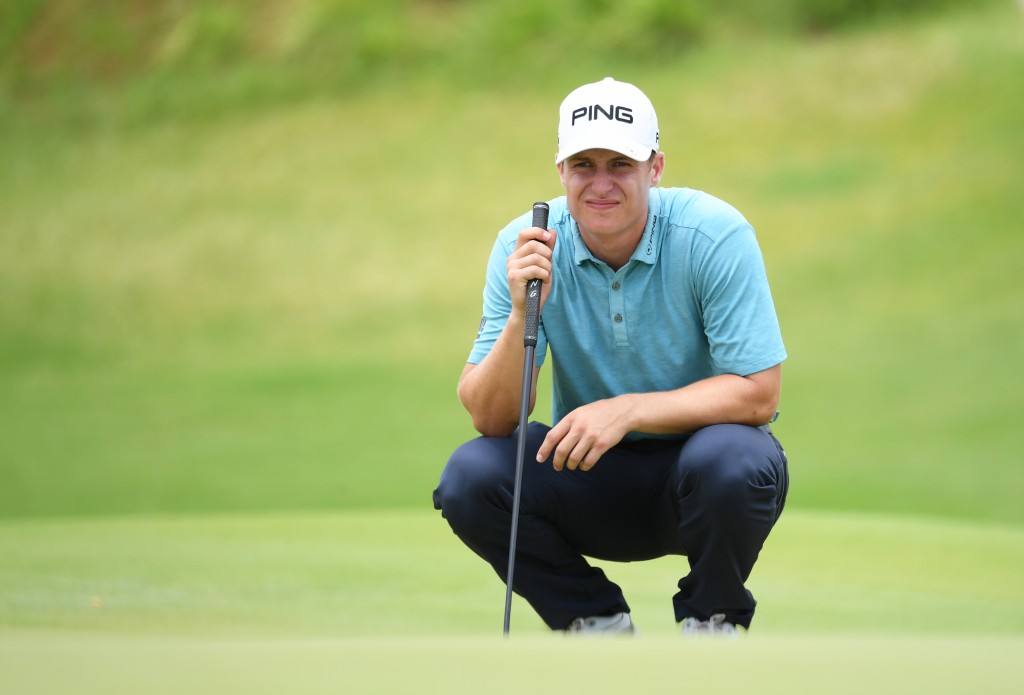 Gleneagles pro Calum Hill jumped up to the top of the leaderboad in the second round of the AfrAsia Bank Mauritius Open with a sparkling 64. Picture by GETTY IMAGES

EUROPEAN Challenge Tour graduate Calum Hill will take a one-shot lead into the weekend at the AfrAsia Bank Mauritius Open after a stunning second round 64.

The Scot recorded a top 15 finish at last week’s Alfred Dunhill Championship to get the season off to a promising start.

And he brought that form to Heritage Golf Club, moving to 12-under as he matched the low round of the week.

Hill won twice in 2019 to secure his European Tour card, and he now leads his second event of the new season after recording nine birdies and just a single bogey on Friday.

The final gain – a 20-foot putt on the last – was enough to edge the 25-year-old ahead of South African Rolex Series winner Brandon Stone, Belgian Thomas Detry and Frenchman Matthieu Pavon, who all reached 11-under par at Bel Ombre.

Hill, who is attached to Gleneagles, said: “The last couple of days the game has been nice. Managed to get the putter going well today, which added up to a good score.

“Last week was a slow start and I played better at the weekend. I’ve just built on it from there.

“I’m happy with that, especially to make a putt on the last hole to finish off a good round. I made a lot of long range putts – 20-25 foot – probably made four of those.

It has been a case of so far, so good on the European Tour for the winner of the Euram Bank Open and the Made in Denmark Challenge.

Hill, who hails from Kirckaldy, added: “We seem to be following the sunshine so we’re always playing in warm weather and the courses are in great condition.

“I haven’t noticed a huge difference yet coming from Challenge Tour,” said the 25-year-old who graduated from Western New Mexico University

“Obviously the fields are stronger, but it’s the same as every tournament you play – you go out and do your best, see where that puts you at the end of the week, and dig in when you need to.”

BRANDON Stone, who is looking for a fourth European Tour win since promotion from the Challenge Tour four years ago was also pleased with his performance.

“Very happy with how things went,” said Stone. “I got off to a nice start this morning – a couple of birdies early which kind of settled the nerves a little bit. And then from there I just played great all day.

“Very low stress, always in play, gave myself a lot of opportunities and managed to convert a fair number of them and sitting 11-under par going into the weekend is exactly where you want to be.

“The target for the weekend to is go as low as we can go, actually,” said last year’s Scottish Open winner who fired a final round 60 at Gullane to land his first Rolex Series title.

“It’s going to be a challenge and at the same time, there’s a lot of really top quality players in the field, so you’re going to go out and try to shoot as low as you can and, hopefully, by Sunday evening it’s going to be enough.

Detry who is looking to join fellow Belgians Thomas Pieters and Nicholas Colsearts as winner on the European Tour is enjoying his debut in Mauritius.

“It’s my first time in Mauritius,” said Detry. “The place is absolutely lovely, the course is in great condition. I love the place.

“Very happy – shot five-under yesterday, six-under today. We’ve done a few mistakes here and there, but have managed to recover them pretty well.

“Shot eight-under on my last 14 holes so that was a pretty good performance and gets it going for the next two days.

“I’ve been taking it very relaxed, haven’t really practised too much. I’ve been playing well the last few weeks.

“I made it to Dubai after playing well in Sun City and Turkey. I’ve been relying on my confidence and it’s been working.”

Denmark rookie Rasmus Højgaard, who was one of five players to share the first-round lead, and fellow countryman Søren Kjeldsen are on nine-under with South African Christiaan Bezuidenhout, who is looking for his second victory in the calendar year.

The event is tri-sanctioned with the Asian and Sunshine Tours.

•For live scoring from the third round of the AfrAsia Bank Mauritius Open click here.