By Andrew Griffin on 10th September 2019 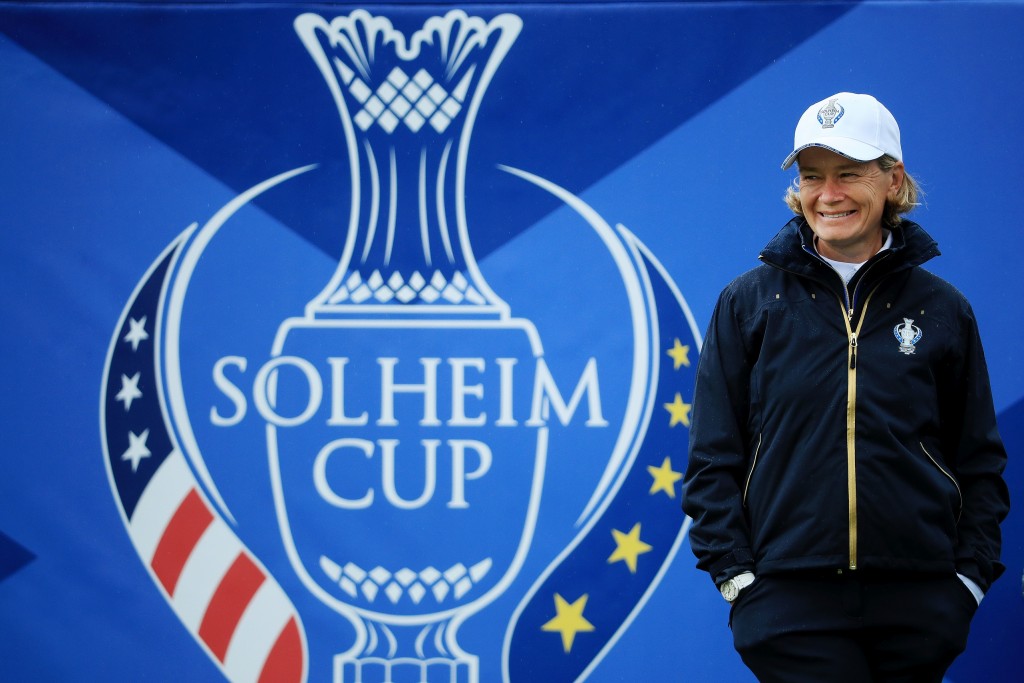 European captain Catriona Matthew says her backroom staff – including Dame Laura Davies and LET winner Mel Reid, will have a key role in the match with America at Gleaneagles. Picture by ANDREW REDDINGTON / WME IMG

THE Ping Junior Solheim Cup is poised for a nail-biting final singles session after the USA edged ahead 7½-4½ on Tuesday, thanks to a dominant afternoon fourball session.

The match was tied at 3-3 after the morning foursomes after three convincing wins for the Europeans.

But Team USA took control after lunch, winning four-and-a-half points from six in the fourball format.

Europe has not won the competition – which started in 2002 for young amateur female golfers – since 2007.

But the hosts gave a strong showing in the opening session. Scotland’s own Hannah Darling and her Surrey-based partner Annabell Fuller, from Roehampton, put the home side’s first point on the board with a 4&3 victory against Sadie Englemann and Lucy Li.

Essex’s Lily May Humphreys – the Welsh and Irish Amateur Strokeplay Champion – and Somerset’s Mimi Rhodes, a semi-finalist in the Girls Amateur Championship last month, won by the same margin against Amanda Sambach and Alexa Pano.

And it was also a 4&3 rout for Italian Benedetta Moresco and Lucie Malchirand, from France, against Zoe Campos and Rose Zhang.

The Americans kept in touch though with one-hole wins for Michaele Morard and Rachel Heck over Pia Babnik and Alessia Nobilio, and Briana Chacon and Brianna Navarrosa against Lilas Pinthier and Paula Schulz-Hanssen.

In the afternoon it was a different story, however. Darling and Curtis Cup player Fuller lost by one hole to Englemann and Heck, a fomer No. 1 in the women’s World Amateur Golf Rankings.

Babnik and Nobilio were downed 3&1 to Morard and Zhang, Sambach and Chacon defeated Humphreys (Stoke by Nayland) and Rhodes (Burnham & Berrow) 2&1, and Li and Wang saw off Moresco and Malchirand by the same score.

Pinthier and Schulz-Hanssen snatched a half point against Pano and Brinker, and there was a change in fortune for the Danes, Leth-NIssen and Norman, who beat Campos and Navarrosa 4&3.

European captain Mickey Walker said: “We played a lot of good golf. The Americans just played better. We made bogeys at a couple of critical points and gave the hole away.

“When we looked on to get something from a match, we’d take three to get down and lose the hole.

“They were very fine margins but we were the ones making the errors at critical times. The girls know that. Matches can be so tight and then go in an instant.

“The Americans were tighter around the greens and putted better. The girls are very honest with themselves.

“Pia and Alessia are disappointed because they played really well but they just came up against Americans who played outstanding golf.

“I think they were six-under and the Americans were eight-under, so it was fantastic golf.

“They know and I know that we can still win this, but we’re going to have to play exceptional golf tomorrow.”