2019 Solheim On Track To Be The Most Successful Ever 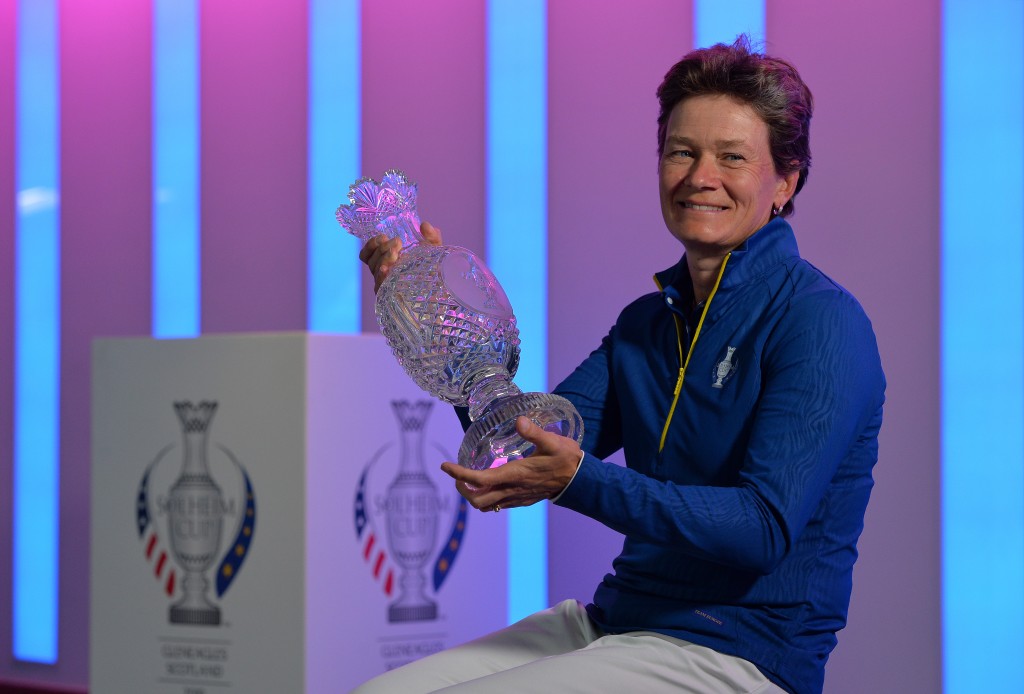 EDINBURGH, SCOTLAND – SEPTEMBER 21: Catriona Matthew of Scotland poses as she is announced as the European Team Captain for the 2019 Solheim Cup to be held at Gleneagles during a press conference at the Edinburgh International Conference Centre on September 21, 2017 in Edinburgh, Scotland. (Photo by Mark Runnacles/Getty Images)

The 2019 Solheim Cup is setting up to be the most successful ever, with strong ticket sales, high levels of interest in the hospitality programme, hundreds of volunteers signed up and a number of commercial partners signed up.

IMG and Visit Scotland today announced the addition of Ricoh, Highland Spring and Carryway as event partners adding to a burgeoning team of internationally-renowned brands backing The Solheim Cup at Gleneagles, 9th to 15th September 2019.

With just under a year to go, interest in the 2019 match has been unprecedented in terms of sponsorship with a stellar stable of global partners that includes PING, Rolex and VisitScotland. Ricoh joins as the Official Office Equipment Partner of The 2019 Solheim Cup, Highland Spring joins as the Official Hydration Partner while Carryway comes on board as the Official Golf Cart Supplier.

Beyond sponsorship, The 2019 Solheim Cup is experiencing significant interest with thousands of tickets already sold, some ticket categories ‘sold-‘out’ and pre-registration for official hospitality exceeding projections.

The Volunteer Application Programme is over-subscribed by as much as 100% and the event is now closed to new applications.

Joe FitzPatrick, Minister for Public Health, Sport and Wellbeing, commented: “We are delighted at the incredible support we have received to host The 2019 Solheim Cup.  The enthusiasm of these premium international brands to be a part of the match at Gleneagles is so encouraging as they too share in Scotland’s commitment to raising the international profile of women’s golf and delivering a world-class event in September 2019.”

Ricoh, a global technology company specialising in office imaging equipment, production print solutions, document management systems and IT services, has been the title sponsor of the Ricoh Women’s British Open since 2007. 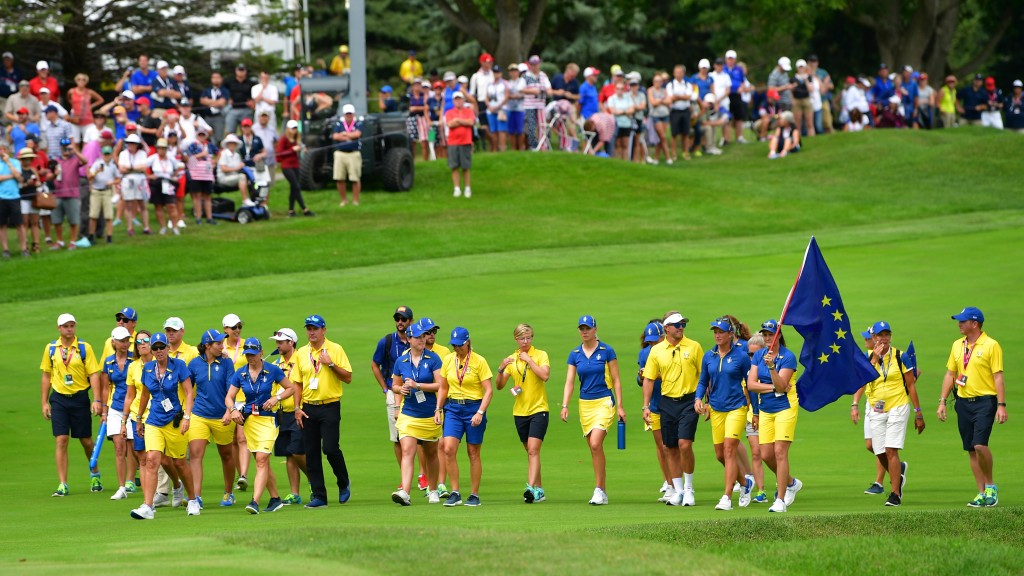 WEST DES MOINES, IA – AUGUST 20: The players and officials of Team Europe walk down the fairway during the final day singles matches of The Solheim Cup at Des Moines Golf and Country Club on August 20, 2017 in West Des Moines, Iowa. (Photo by Stuart Franklin/Getty Images)

Bart Somsen, Head of Brand at Ricoh Europe explained: “We are very excited to be involved in what will be one of the biggest sporting events in 2019. Our support of women’s golf dates back to 2007 and our title sponsorship of the Ricoh Women’s British Open.  Moving forwards, we look forward to seeing our brand ambassadors, Georgia Hall and Charley Hull, perform well for TeamEurope.   We can’t wait to be part of The Solheim Cup: nothing compares to the exhilarating atmosphere created at a team event and The Solheim Cup, against the glorious backdrop of Gleneagles, is set to be a huge success.”

Highland Spring Group is the biggest producer and supplier of natural source water in the UK. Based in Perthshire and founded in 1979, every drop of Highland Spring water comes from the majestic Ochil Hills, where it is carefully drawn from protected land.

Simon Oldham, Chief Commercial Officer of Highland Spring commented: “Sport and hydration go hand in hand. That’s why we’re passionate about encouraging players and sports fans alike to get active, have fun and keep hydrated. Next year’s Solheim Cup takes place against the stunning backdrop of The Ochil Hills, in Perthshire Scotland, making it a perfect showcase for what Scotland has to offer. We’re excited to play a part in helping everyone involved make the most of what will be a truly thrilling sporting event.”

Carryway are the Official Golf Cart provider to the Solheim Cup, today they service and support a large number of leading Golf Clubs and hotel resorts across Scotland and England with Club Car golf and utility vehicles.

Sarah Black, Managing Director of Carryway said: “We are delighted to be involved in what will be one of the biggest women’s sports events in 2019 and to look forward to working with the team in helping deliver the best Solheim Cup to date.”

European Captain and VisitScotland Ambassador, Catriona Matthew, is looking to return the trophy to Europe in 2019 after an inspired USA team retained their trophy by 16 ½ to 11 ½ points, in front of record crowds in Iowa. Organisers are now aiming to set a new record for a European edition in 2019.

Themes of equality, innovation and experience will be threaded through all the event’s communications as The 2019 Solheim Cup aims to engage both the traditional golf audience and the wider sport fan, raising the profile of women’s golf both in Scotland and internationally.

The Scottish Government and VisitScotland have been long-time supporters of the women’s game, having partnered with the Ricoh Women’s British Open and the recently significantly enhanced Aberdeen Standard Investments Ladies Scottish Open, which took place as a co-sanctioned LET and LPGA event for the first time last year.

The 2019 Solheim Cup will not only showcase the stunning assets of Scotland, the Home of Golf, but also build on the legacy of the successful 2014 Ryder Cup at Gleneagles. It will underline that Scotland is the perfect stage for major golf events as it seeks to help inspire a new generation of children to take up the game invented in their home country.

A complete list of partners and sponsors is below: