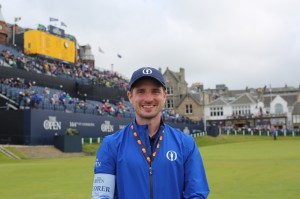 David Ross, winner of MasterCard’s Keep score and be a scorer at The Open competition at the Home of Golf, St Andrews, Scotland

A lucky winner of MasterCard’s Keep score and be a scorer at The Open competition has described scoring for 14-time major winner Tiger Woods, at the Home of Golf, St Andrews, Scotland, during The 2015 Open, as a “once-in-a-lifetime experience”.

As part of its Official Patronage of The Open, MasterCard partnered with Golf GameBook to present cardholders with the opportunity to win one of two Priceless Experiences, scoring for a marquee group on the historic Old Course during round one of golf’s oldest major championship.

Open to golfers across the UK & Ireland, entrants needed to simply input their own scores from an 18-hole round onto the live-scoring app, Golf GameBook.

One of the winners, David Ross, 33, from Aviemore, Scotland, was assigned to the group including the former World Number One, Tiger Woods, 2010 Open Champion (and 2015 runner up) Louis Oosthuizen and Jason Day, who is currently ranked fourth in the Official World Golf Rankings.

He continued: “It would have been amazing getting to walk around with professional golfers anyway, but to be walking around with Tiger Woods, Jason Day and Louis Oosthuizen and watch them hit the ball and see how they go through their process was just something that will stay with me forever. Just amazing.”

He said: “The way they can punch the ball under the wind. I can’t do that. So to stand there and watch them actually do that was brilliant. Overall, I’d give the experience 15 out of 10.”

Mikko Manerus, Co-Founder and CEO of Golf GameBook, said: “This is the second year we have partnered with MasterCard to offer this prize and there is an attractive synergy between golfers scoring their own rounds to give themselves a chance to score for some of the world’s best golfers.”

For more information about MasterCard’s role as Official Patron of The Open and to see videos of the Priceless Surprises they delivered to cardholders during the event, visit: