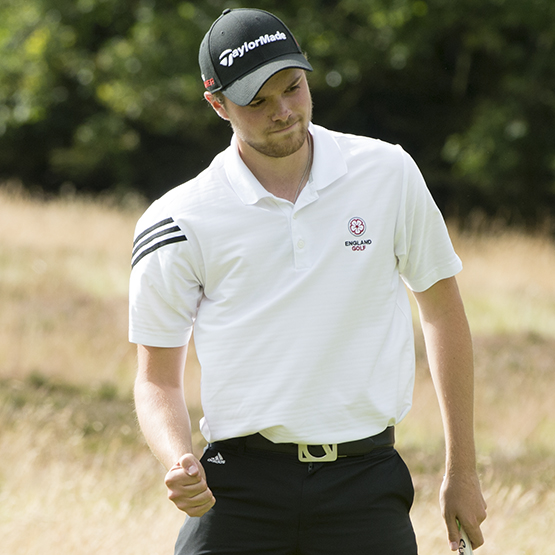 Nerves were thoroughly tested in the English amateur championship today as players battled for places in the quarter-finals at The Alwoodley Golf Club, Leeds.

There was much drama as two matches this afternoon went into extra time and two others were decided on the 18th.

Rob Burlison (Enville) secured his place in the final eight with an eagle three on the 21st where he holed a 20-footer. He’d already made a great par on the last, getting up and down from 40 yards, to take the match into extra time.

He added: “I’m normally quite good under pressure. You just have to accept it means a lot and while you might be nervous, enjoy it as much as you can.”

Yorkshire’s Joe Dean (Lindrick) continued his run of good form with a 20th hole win over Todd Clements (Braintree). Meanwhile, back at the clubhouse spectators were treated to two grandstand finishes.

Derbyshire’s George Bloor was the first player to claim his quarter final place when he birdied the 18th to beat England international Adam Chapman.

The 19-year-old from Cavendish said: “The birdie just topped it off. We had both played well and I knew one of us was going to have to do something special.”

There was never more than a hole between the two throughout the match and they came down the last all square after Bloor lost the 17th, where he found the gorse.

He was one-up playing the last but looked odds on to lose the 18th. Both players decided to drive down the first and Penge was safely on the green in two, but Bower took three to reach the green, having tangled with a bunker en route.

However, he holed a 35-footer to grab his place in the quarter finals. “I can’t tell you how relieved I am, it was really close,” he said. “Marco is a fantastic player and made a really good fight of it.”

There were more comfortable wins for Tom Robson (Weymouth) who went through 4/3 and Jake Storey (Alnmouth) who was a 5/3 winner. Storey has proved himself to be a very tough match player, having had just three bogeys in the knockout rounds, and this afternoon he was four-under par when he closed out his match.

Hampshire’s Scott Gregory (Corhampton) was last year’s runner-up and reached the quarter finals with a 3/2 win over Yorkshire’s Dan Brown. “I tend to make a lot of birdies and if the course is tight it plays into my hands,” he said, and true to his word, he birdied the first three holes to get to two up and never fell behind.

“One of my aims was to do well in this tournament. I’ve got the belief and the confidence because I did it last year, I’ve done everything except win and I’ll just keep plugging away, one match at a time.”

The final match of the day brought together two in-form players: Alfie Plant (Sundridge Park), who has just returned from a successful spell representing England in French events, and international Paul Kinnear who played in The Open at St Andrews.

Plant won 3/1 and commented: “It was nip and tuck all the way. Paul had a few lip-outs coming in which just kept me in front.” Crucially though, Plant made a good birdie on 16 to get to two up and, when Kinnear found trouble on the 17th, the match was his.