By Andrew Griffin on 3rd December 2019 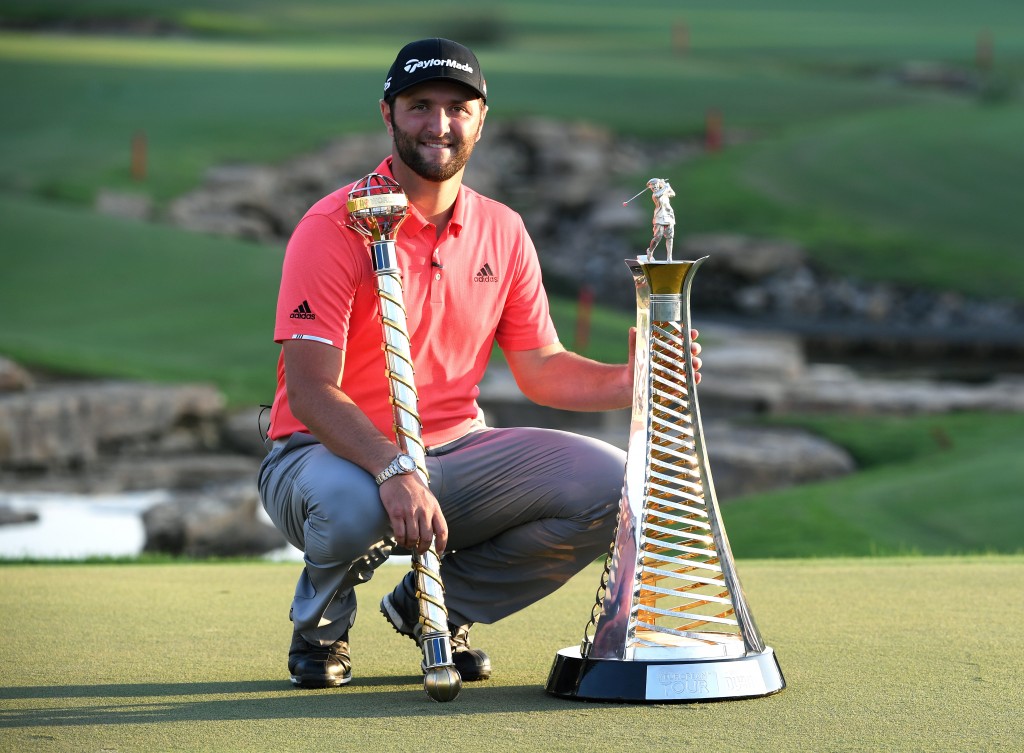 Jon Rahm named Hilton European Tour Golfer of the Year after becoming the first Spaniard since Seve Ballesteros to be crowned European No. 1. Picture by GETTY IMAGES

REIGNING Race to Dubai Champion Jon Rahm has been named the 2019 Hilton European Tour Golfer of the Year.

Rahm was selected by a panel comprising members of the golfing media as the winner of the prestigious annual award.

A superb season saw Rahm claim two Rolex Series events, defend his national Open title and become the first Spaniard since Severiano Ballesteros to finish the year as European No. 1 – after sealing the Race to Dubai title in a dramatic finale to the 2019 campaign.

The 25-year-old finished tied ninth at The Masters, tied third in the US Open and was runner-up at the Estrella Damm Andalucia Valderrama Masters before securing his first European Tour title of the year at the Dubai Duty Free Irish Open.

The latter victory was his third Rolex Series victory in the space of three years.

Rahm came close to claiming another Rolex Series title in September, finishing runner-up to Danny Willett at the BMW PGA Championship, at Wentworth, after rounds of 66, 67, 68 and 70 on his debut in the event.

On home soil, at Club de Campo Villa de Madrid, Rahm defended a title for the first time in his career as he won the Mutuactivos Open de España in the Spanish capital.

The Spaniard stormed to victory in front of an adoring home crowd, carding a third round of 63 to take a five-stroke lead, which he then maintained as he finished on 22-under for the week.

His remarkable consistency throughout 2019 gave him the opportunity to win the Race to Dubai for the first time in his career at the final event of the season – Dubai’s DP World Tour Championship – an event he previously won in 2017.

Rahm shared the lead going into the final round, and then secured the victory on the 18th hole at Jumeirah Golf Estates.

He got up and down from a greenside bunker for birdie to hold off the challenge of 2017 Race to Dubai Champion Tommy Fleetwood.

It was his fourth Rolex Series title win of the year for the richest first prize in tournament golf – $3million – and the 2019 Race to Dubai crown.

Rahm became just the second Spaniard in history to win the Harry Vardon Trophy as European No. 1, following in Ballesteros’s footsteps.

“It is a huge honour for me to be named the Hilton European Tour Golfer of the Year,” said Rahm, who announced as the winner at a lunch held at The Biltmore Mayfair Hotel in London.

“To emulate another of Seve’s achievements in winning this award is very humbling, and I’m so proud of what I have achieved this year.

“To win both the Dubai Duty Free Irish Open and DP World Tour Championship for a second time, as well as defend the Open de España, were all incredible moments.

“But to finish the year as winner of the Race to Dubai is something I’m incredibly proud of achieving at this early stage in my career.”

European Tour chief executive Keith Pelley said: “The 2019 European Tour season had so many stand-out moments, not least the dramatic finale at the DP World Tour Championship, Dubai – when Jon earned his place in European Tour history, joining the legendary Seve Ballesteros as the only other Spaniard to become Europe’s No. 1 player.

“For Jon to win the Race to Dubai in the manner that he did, with so much pressure on that final hole, simply underlines what an incredible competitor he is.

“However, this award also recognises the hugely impressive standard of his performances across the year.

“It demonstrates the strength we have on the European Tour that there were a number of worthy contenders for this award, including Shane Lowry, who narrowly missed out despite winning The Open and a Rolex Series event.

“Jon has a wonderful future ahead of him and he is undoubtedly a deserving winner of the 2019 Hilton European Tour Golfer of the Year award.”

Panellist Alistair Tait, senior writer at Golfweek, said: “This was one of the most keenly debated Golfer of Year panels we’ve had for a number of years, with Shane Lowry’s unforgettable victory in The Open Championship at Royal Portrush the standout performance of 2019 on the European Tour – and an iconic moment in our sport.

“But after much discussion, Jon’s remarkably high standard of performance across the season tipped the scales in his favour as he became only the second Spaniard after the legendary Seve to become European No. 1.

“His three victories were each hugely impressive in their own right and each achieved on very different golf courses, underlining how rounded Jon is as an elite player.

“Like Seve was before him, Jon will be a central figure in European golf for many years to come, and he is a very worthy winner of the Hilton European Tour Golfer of the Year award.”

•To see the final Race to Dubai standings for 2019 click here.