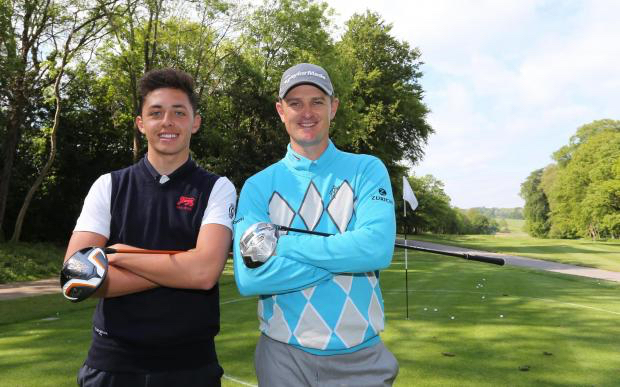 MARCO Penge has set a new course record at Dudsbury Golf Club in his opening round of The GolfCatcher Championship thanks to a nine-under 62.

The Golf at Goodwood Golfer is having some week after finishing top of his regional qualifying for The Open having shot a six-under 66 at West Lancashire on Monday.

Penge, who turned pro in 2017, was seven-under through his front nine in Dorset, including a rune of eagle, birdie, eagle on his middle three holes.

On the back nine, he picked up three birdies to find himself three clear – his best finish on the EuroPro last season was tied 3rd in the Nokia Masters at Mannings Heath.

Penge, who was one of the country’s most promising juniors after a string of wins six years ago, said: “My game feels great. It’s felt great all year really. Just been waiting for everything to kind of come together and everything be good on that one day.

“And today has been that day really. Everything was great. Putting well and driving it well,” added the West Sussex golfer, who won the Douglas Johns (U15), McGregor (U16) and Peter McEvoy (U18) Trophies – as well as the Sir Henry Cooper Junior Masters and the Scottish Strokeplay – before he had even turned 18.

Drayton Park’s Jack Gaunt, the losing English Amateur finalist at The Berskhire two years ago, went around in six-under along with Essex’s Todd Clements, the man who beat him.

Clements, who is now attached to Brocket Hall, is making his first appearance on the tour since winning at the Welwyn Garden City club he now repesents, in the opening event of the season.

Gaunt was five-under for his front nine while Clements went bogey-free to start their weeks off on a high.

Dudsbury’s own, Lee Thompson was tied 11th on three-under along with several other players including another Martyn Thompson, from nearby Parkstone Golf Club.

You can follow live scoring at Dudsbury for Thursday’s second and Friday’s final round by clicking here.