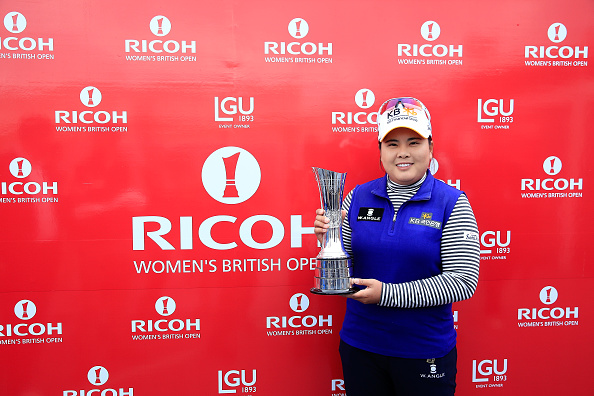 TURNBERRY, SCOTLAND – AUGUST 02: Inbee Park of South Korea poses with the trophy following her victory during the Final Round of the Ricoh Women’s British Open at Turnberry Golf Club on August 2, 2015 in Turnberry, Scotland. (Photo by David Cannon/Getty Images)

Park Joins the Elite in Style

The World No. 1 carded a superb seven under par 65 to win the Ricoh Women’s British Open at the Trump Turnberry Resort and in the process join the elite group comprising Pat Bradley, Juli Inkster, Annika Sorenstam, Louise Suggs, Karrie Webb and Mickey Wright who have previously achieved that feat.

The 27 year-old from Seoul has also won the Evian Masters, the current fifth Major, albeit before it was accorded that status a couple of years ago.

Park started the final round in a share of fifth place three shots behind leaders, Jin Young Ko and Teresa Lu, but claimed the lead for the first time with an eagle on the 449-yard par-5 14th hole and then sealed the seventh Major victory of her career with a birdie on the 372-yard par-4 16th and pars on the last two holes.

The Korean’s 65 gave her a 72-hole aggregate of 12-under par 276 and a two shot victory over co-third rounder leader, Jin Young Ko, while Lu dropped back to sixth place on 282 after carding a 74.

Ko belied the fact she was playing in her first Major by carding a one under par 71 to finish second on 279 while her namesake, Lydia, the World No. 2, returned a 69 to share third place with Korea’s So Yeon Rhu on eight under par 280.

Anna Nordqvist closed with a three under par 69 to be the leading European in the field in a share of seventh place with Japan’s Mika Miyazato on five under par 283 while Britain’s Amy Boulden and Mel Reid were tied in ninth place with Minjee Lee one shot further behind.

“It feels great to hold this trophy finally,” said the new champion after winning on what was her eighth appearance in the Championship. “I have given it a few cracks but it just been so hard.

“This is the one trophy I really wanted to win because it means so much, has so much history. It’s definitely the golfers’ most wanted trophy. I set one goal this year and that was to win the British Open and, being the only goal I’ve set, it feels great.

“Now, I’ve put my name on every single Major,” she added.” I mean the Evian, I won that the year before it became a Major, but I was still the Evian champion and my name is still on the trophy. I feel like I’ve won all the Majors in women’s golf. But it would be nice to win the Evian again as a Major, maybe that should be my goal now.”

“I think I was a little nervous and was over-thinking a bit,” said the runner-up, Ko, who has won three times this year on her native Korean LPGA Tour. “To finish second is not bad for the first time. I played really, really well the last four days and now I just want to cheer myself up and move on to the next round.

Early on during the final round, Danish Ladies European Tour rookie, Nanna Madsen, set the early pace by also equalling the Turnberry Championship record of 65 set by Candie Kung back in 2002 and subsequently equalled by Heather Bowe and Jennifer Rosales in the same Championship and by Joo Kym Hoo in the first round this week.

Madsen started the final round in a share of 53rd place at eight over par 224 but jumped 32 places up the leaderboard with her seven under par round. The Dane’s birdie barrage started at the 1st and she also gained shots at the 4th, 5th and 7th to race to the turn in 32 before carding four birdies and a bogey as the wind started to strengthen coming home.

“It’s my first Major so it’s really great to finish with a good round,” said Madsen, who headed the field at last year’s LET Qualifying-School in Morocco. “The last two days I didn’t play my best, so it’s nice to come out and play well in better weather today.”

“I played quite a few links in my amateur career,” she added. “To be honest, I didn’t like links because it was really, really hard in the wind but, yeah, I like it a bit better now.”

Spaniard, Luna Sobron, followed in the footsteps of the likes of Belle Robertson, Rebecca Hudson, Michelle Wie, Mel Reid, Anna Nordqvist, Caroline Hedwall and Lydia Ko after winning the Smyth Salver awarded to the leading amateur who plays all 72 holes.

Sobron, who qualified for the Championship by winning the 2014 European Amateur, opened with rounds of 70 and 77 to become the only amateur to survive the cut and she went on to add a 71 and a 69 to finish tied 13th alongside Cristie Kerr, Hyo-Joo Kim and Yani Tseng on one under par 287.

“It has been a pleasure to play here with the best players in the world and a privilege to win a trophy   people like Lydia and Michelle have won,” she said.

“I’ve enjoyed it a lot. The second day was very difficult. I suffered a lot because I played in the afternoon but it has been great fun.”