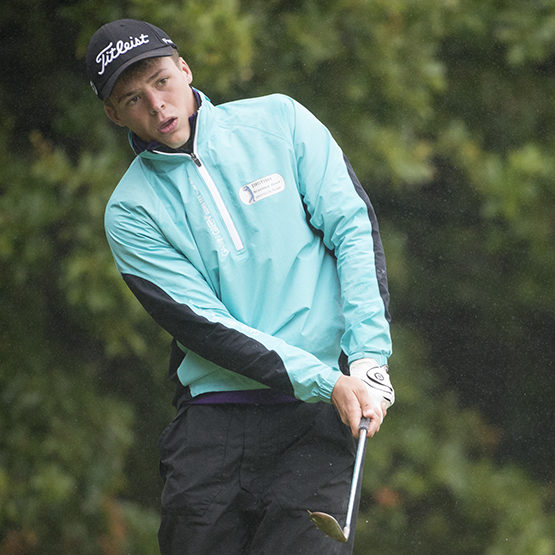 as qualifying for the match play stage of the English amateur championship was finally completed today at The Alwoodley and Pannal Golf Clubs in Yorkshire.

Play was suspended yesterday when torrential rain flooded both courses and over 100 competitors returned today to complete their first round, which was used to decide the qualifiers. The leading 32 players, plus ties, from each course went through to the knockout.

Wicks (Sedlescombe) led the qualifiers at The Alwoodley after returning to complete a four-under par 67 which is a new record following changes to the course.

He had played through the worst of yesterday’s weather and was four-under when play was called off, having just hit his tee shot on the 13th into a bunker.

He had all night to contemplate his shot from the wet sand, but he returned to complete his bogey-free round.  “I tried not to think about it overnight, tried to chill out, speak to friends, but I knew I was in a pretty good position,” said the 21-year-old (Image © Leaderboard Photography).

Wicks is a student in the USA, having completed two years at junior college in Texas where he has won seven times and was ranked number one nationally in his first year and number two in his second. He’s now transferred to Jacksonville University in Florida. “The structure there has helped me a lot,” he commented.

At Pannal, Yorkshire’s Jamie Bower (Meltham) secured a share of fourth place when he completed a five-under par 67 with two pars when play resumed. “I’d hit my tee shot to the middle of the green on the 17th and I came back today and two-putted,” he said.

He described yesterday’s weather as horrendous, but was able to take a relaxed attitude to the suspension in play. “I was in a good position so I felt comfortable, but if I’d had a worse score I would have been anxious. It was still raining today but not as heavy.”

The cut for qualifying at Pannal fell on one-under par and a total of 34 players went through. At Alwoodley the cut was on three-over par and 37 players qualified.

The match play will all take place at The Awoodley where 14 players will be involved in a preliminary round, starting at 7.30am tomorrow. The first round begins at 8.45am.