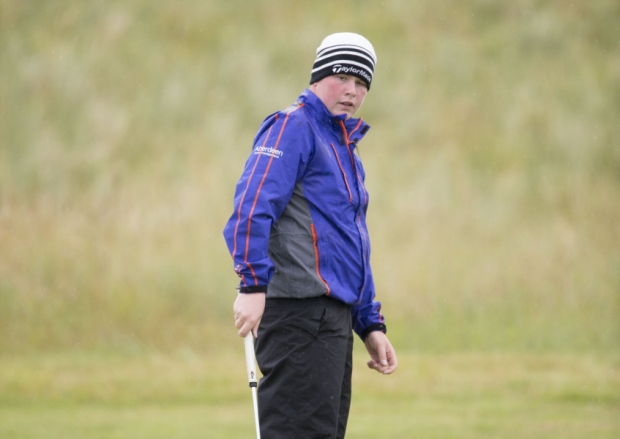 MacIntyre the Master of Muirfield

On the same green where Phil Mickelson lifted his first Claret Jug at Muirfield two years ago, another ‘leftie’ had his moment at the renowned venue yesterday (1 August).

After producing a quite stunning comeback, Robert MacIntyre claimed the Fairstone Scottish Amateur Championship, becoming the first left-hander in living memory to secure the title. Two days before his 19th birthday, the Oban player, attached to the Glencruitten club, gave himself an early birthday present with a two-hole victory over Craigie Hill’s Daniel Young.

It was the first staging of the Scottish Amateur at Muirfield since 1968, home to The Honourable Company of Edinburgh Golfers, and how the 256-man field enjoyed competing on one of the world’s best layouts.

On a blustery but largely pleasant day in East Lothian yesterday, MacIntyre’s bid looked set to be blown off course when he trailed to his fellow Scotland international by four holes at lunch in the 36-hole final. Young, the reigning South African Amateur winner after his victory at Silver Lakes in March, showed his matchplay pedigree to carve out an impressive lead, mainly thanks to his short game prowess.

But former Scottish Youths champion MacIntyre, a college student at McNeese State in the US, dug deep to produce a stunning comeback to level the contest at the 27th. Young edged ahead once more with an immediate birdie at the 28th, but MacIntyre refused to be denied and went ahead for the first time in the match at the 31st, when some brief rain showers threatened to spoil the occasion for both the players and the healthy crowd.

In a see-saw match that was engrossing to watch, MacIntyre’s bogey at the 32nd levelled the showdown again, before the Argyll & Bute teenager decisively went one up when Young missed from four feet at the 35th before he clinched the win on the final green.

“It feels unbelievable,” said Scottish Golf Academy graduate MacIntyre, who emulates past Scottish Amateur winners like Colin Montgomerie and Stephen Gallacher. “It’s my first victory at Men’s level in Scotland so I guess it’s not a bad one to win, probably the best. I went out onto the range after lunch and felt I was hitting it good, so just took it out to the golf course.”

Robert, coached by George Boswell, added: “It feels great to be the first left-hander in living memory. I believed I had a chance this week, coming in with a relaxed mindset. It got me through so far and I just had to dig deep in the final. I just kept telling myself not to give up.”

Young, 23, said: “I was in a position to push on and win but I’ve said all week that two, three or four up is nothing round a course like this. You can be easily pegged back.

“I felt I didn’t play as well as I did in the afternoon compared to the morning and gifted him a few holes, especially on the front nine. But don’t get me wrong, Bob played awesome in the afternoon and never gave me anything. He holed out brilliantly from six feet and in. It is disappointing just now, but I suppose it’s a good week in the end and it’s still been a good year for me.”

In the morning round, after the early trading of holes, Young took a grip of the contest from the long fifth. His birdie there, after a deft chip from the back of the green, took him one up and after bogeys from MacIntyre at the seventh and eighth, his lead was extended to three.

Three holes were halved in pars, before MacIntyre rolled in a birdie putt on the 12th to reduce the deficit to two.

There was little to separate the pair as the next three were again halved, but the Perthshire player produced an important surge over the closing two holes before lunch. His two-putt birdie at the 506-yard 17th took him three up, before MacIntyre found a fairway bunker on 18 to allow Young to go four ahead with a solid par.

A multiple domestic winner, Young – coached by Sandy Smith – looked well placed to become only the third player from Perth & Kinross to lift the SGU’s flagship title after Graham Lowson and Glenn Campbell.

But Young’s opening two bogeys after lunch set the tone, as MacIntyre quickly ate into his lead. The left-hander was within one through 22 holes, only for Young to birdie the long 23rd after two glorious strikes to 15 feet.

However, in the ever-stiffening breeze, MacIntyre handled the conditions better and made pars at the 25th and 27th as Young dropped shots, allowing him to square the match and then go on to achieve eventual glory.