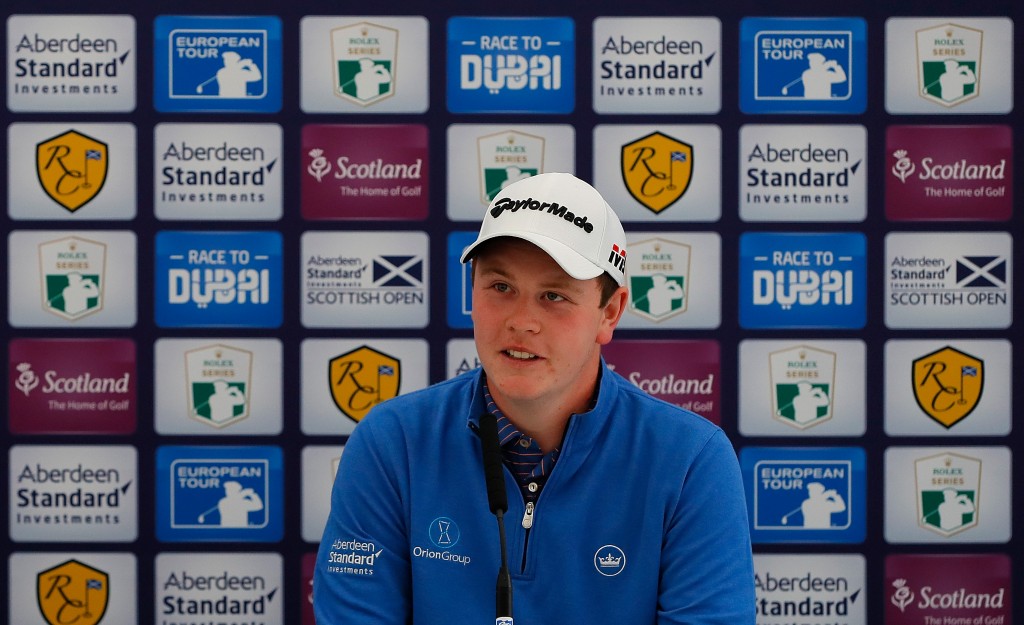 European Challenge Tour graduate Robert MacIntyre will fly the Saltire flag during the Scottish Open when he tees it up with four-time Major winner Rory McIlroy and defending champion Brandon Stone, on Thursday. Picture by GETTY IMAGES

The 22-year-old, who graduated from the European Challenge Tour last year, is in the marquee TV group for the third Rolex Series event of the season which gets under way tomorrow (Thursday), and will be broadcast on Sky.

MacIntyre, who lost in the 2016 Amateur Championship final to Hampshire’s Scott Gregory, impressed with consecutive runner-up finishes at the Betfred British Masters, at Hillside, and Made in Denmark in May.

Scot MacIntyre, who hails from Oban, now has his sights set on an exciting first appearance in his national Open at The Renaissance Club, in North Berwick.

MacIntyre, who is attached to Glencruitten GC, said: “I’ve got to be thrown in at the deep end at some point. It’s just about learning from this. It’s another step in the learning experience for me.

“I’m sure the crowds are going to be unbelievable anyway. Home soil for the first time is going to be something different.

“Playing the Challenge Tour was good but to finally play a Scottish Open is something I’ll never forget,” added MacIntyre, who tees off with McIlroy at 1.40pm, on Thursday.

Stone said: “The greens are quite severe. A lot of tricky sloping, it should prove a true test.

“If the wind picks up like it might, that typical Scottish links breeze, it might be a little bit more penal for the guys that are hitting it a bit more wayward – but the course is in fantastic condition, it really is. The greens are great.

“They are having a lot of rain at the moment but at the same time the course is holding up quite well.

The South African became the fourth player in European Tour history to card a winning final round of 60 as he won his third European Tour title.

Russell Knox, the highest-ranked Scot in the field this week, will go in search of his second Rolex Series title after his stunning victory at last year’s Dubai Duty Free Irish Open.

Knox holed a 60-foot putt at Ballyliffin to force a play-off against Ryan Fox and then made an almost-identical putt on the first extra hole to win his second European Tour title.

Knox admitted this week that being based in the United States had hurt his Ryder Cup hopes, after he was overlooked for a captain’s pick by both Darren Clarke and Thomas Bjorn in 2016 and 2018 despite winning once in the States as well as in Europe.

Knox, who moved permanently to the States in 2007 – after attending Florida’s Jacksonville University – said: “I actually thoroughly enjoyed slashing it on the range in the rain.

“It’s been a while since I put on the rain suit and just hit balls on the range in the rain. I kind of wanted to practice a little bit today, even though it was pouring rain.

“But no, it’s amazing to be back. Always feel like I’m at home instantly when I touch back on Scottish soil.” added the 2015 WGC-HSBC Champions winner.

Despite being a US citizen, Knox still very much feels Scottish and praised the current group of Scots battling their way to earn and keep their cards.

Knox said: “I sure hope one of these young guys turns out to be 10 times the player I am. It would be great for Scotland.

“It’s been great – it’s been coming for a few years. It was obvious that there was going to be a next wave of great players, and it’s obviously here now.

“It’s great for Scottish golf, great for the European Tour, and hopefully this week, one of us will play well.”

As well as Tour veterans and Scottish Ryder Cup players Paul Lawrie and Stephen Gallacher, the Saltire will be flown by the likes of David Drysdale, former US Amateur winner Richie Ramsay, Scott Jamieson and Marc Warren, who have 19 wins on the European Tour between them.