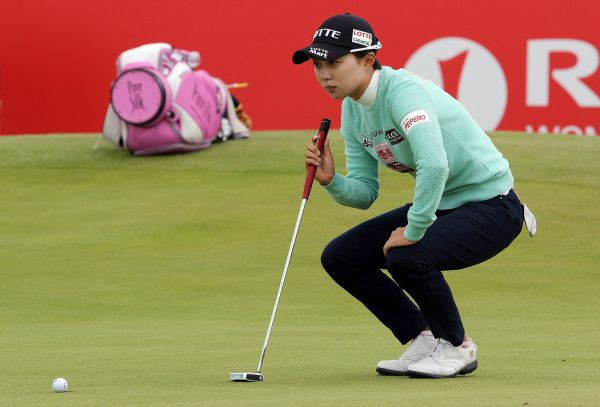 Korea’s Hyo Joo Kim carded a superb seven under par 65 to storm into a one shot lead after the first round of the Ricoh Women’s British Open at the Trump Turnberry Resort in Ayrshire.

20-year old Kim goes into the second round with New Zealand’s Lydia Ko and America’s Cristie Kerr breathing down her neck on 66 and with two other Koreans, Q Baek and So Yeon Ru, on five under par 67.

Four other Asians, Minjee Lee, Amy Lang, Misuzu Narita and World No. 1 Inbee Park were tied for 14th place with Angela Stanford, Klara Spilkova, Beatriz Recari, Nicole Broch Larsen and Anna Nordqvist on three under par 69 while the defending champion, American Mo Martin, was part of the large group just five shots off the pace on 70.

Kim opened with a record-breaking 10-under par 61 on her way to winning her first Major title at last year’s Evian Championship in France and she went low again with a flawless round in which she raced to the turn in three under par 33 and then came home in 32 to tie the low score carded by Candy Kung, Jennifer Rosales and Heather Bowie on the only other occasion this Championship was staged at Turnberry back in 2002.

“No. 14 was almost an albatross,” she said through an interpreter. “I hit it to 10 inches and made eagle. “The last few weeks I haven’t been swinging well but today I hit it into the fairways and hit the greens very well. I kept playing well.”

There was a lot of good golf on display on a day in which the sun shone for what was just about the first time this week.

Ko was another player who took advantage of the benign conditions and the World No. 2 might well now be the favourite to land her first Major title come Sunday night.

She went on to make amends for that dropped shot with her fifth birdie of the day on the 7th and birdied the par-4 10th and the par-5 14th to complete what was her lowest ever round  in a Major Championship.

“I hit it pretty solid and when I did miss it I missed it in the right places,” Ko said. “Any time you drop just one shot at the British Open, you know you are playing pretty well.

“I saw from the forecast that it was probably going to be the best day of the week so I knew I needed a fast start.”

“It was beautiful out there especially along the water out there at the lighthouse,” she added. “I would love to have been a photographer and have been able to take a couple of photos out there.”

Two-time Major champion, Kerr, finished tied second behind compatriot, Sherri Steinhauer, in this Championship at Royal Lytham and St Annes back in 2006 and she has every chance of going one better after carding a sparking 66 featuring seven birdies and an eagle on the 462-yard par-5 hole where she hit a 5-iron into 20-feet and then holed the putt for a three.

“It played pretty benign today, but there are still tough holes out there, so it’s a good start,” said the American. “I had a lot of fun out there today. I played within myself, didn’t over-worry about the results and it worked.”

She added that she did not believe the arrival of US Presidential candidate, Donald Trump, the owner of the Turnberry Resort, had  distracted from the golf: “Not at all, she said. “Actually, Donald and I are pretty good friends and he’s made me honorary member at all his clubs. We are so thrilled to be here at Turnberry.

The most spectacular shot of the day came from America’s Morgan Pressel who holed out for an albatross two on the 449-yard par-5 14th with a 5-wood from 197 yards. The four-time Solheim Cup player went on to card a two over par 74.