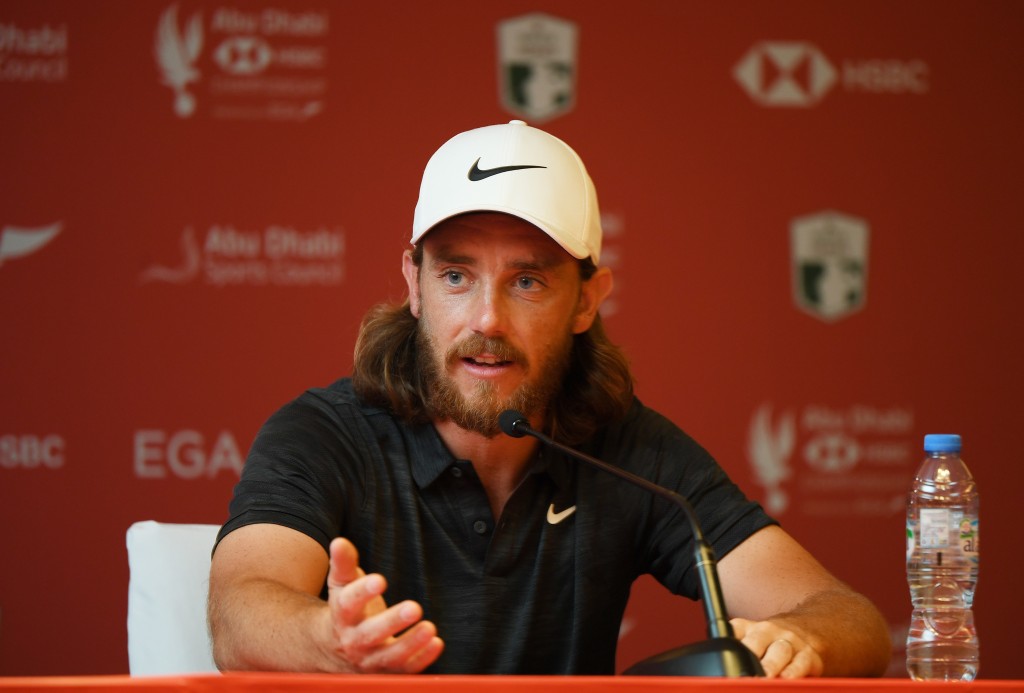 Tommy Fleetwood going for a hat-trick in the Abu Dhabi HSBC Championship this week – his birthday is on the final day which is being played on Saturday after a Wednesday start. Picture by GETTY IMAGES

TOMMY Fleetwood is targeting an historic third successive victory at the Abu Dhabi HSBC Championship – the first of eight Rolex Series events on the 2019 Race to Dubai.

But the Englishman – who is free to play with the equipment he chooses after opting not to tie him himself down to a deal with one club manufacturer – must first overcome a world-class field including two of the world’s top three players.

The 2018 Ryder Cup star turns 28 on Saturday, and with a Wednesday start and Saturday finish this year, the scene is perfectly set for Fleetwood to lift the famous falcon trophy for the third time.

Such a victory would make him just the ninth player in European Tour history to win the same event three times in a row.

Fleetwood, who was crowned European No. 1 after winning the Race to Dubai in 2018, said: “I’ve said it before, the course kind of battered me for a few years.

“I’ve only missed four or five cuts around here, had two years where I’ve won but overall, the course is, has always been a very fair test.

“This is a course where if you play well, you can do well and if you don’t, you kind of struggle. Just so happens the last two years, I played really well, kind of like tee-to-greened it to death in a way.

“I’ve played so well that, you know, it was hard. I made very little bogeys over two years, and ultimately that’s ended up in me winning a couple times.

“I’ve been trying things for a long time now. I spent quite a bit of time in San Diego last year, trying all different manufacturers.

“You don’t really get the chance throughout the year, and then you get the chance again as the year ends, but I had a pretty dry spell of not playing golf, so the only time to test is now, really.

“I had a week of practise last week trying everything we can.

“I’ve got a new driver this week. I’ve got new irons, which I guess is the one that everybody’s seen but eventually, you have to try them in a tournament, otherwise it means nothing.

“Literally, going on a course is the next step, trying everything on the range,” said the former No.1 World Amateur Ranked player, who announced, in November, he will host the 2019 British Masters at Lancashire’s Hillside GC, from May 9-12.

Dustin Johnson, like his Ryder Cup team-mate and close friend Brooks Koepka, is in a positive mood, having already started his season at the Sentry Tour of Champions in Hawaii, two weeks ago.

He said: “I feel like the game’s in good form. I’ve been working on it since Hawaii, so I feel like it’s definitely gotten a little bit better, and I’m looking forward to seeing how it holds up this week on the golf course.

“Obviously it’s very hard to win out here but giving myself the opportunity to have a chance to win, I think that’s important.

“And then, yeah, obviously the number of wins you have in a season will definitely dictate if it’s good or not.”

Westwood, meanwhile, returns for his first appearance of the 2019 season having claimed one of the most significant victories of his career, and his maiden Rolex Series title, at November’s Nedbank Golf Challenge hosted by Gary Player Country Club.

The Nottinghamshire born ace said: “I finished last year off, I’m looking forward to getting going this year as quickly as possible.

“Sort of in the same vein of form. You know, this is always a good place to start the year.

“Conditions are perfect and it’s a good run of tournaments in pretty much guaranteed weather, and the golf courses are in brilliant condition normally.

“You take a lot of confidence from any win, but one in a Rolex Series, it obviously means a little bit more, and to finish it off as I did, which I haven’t done for some time.

“I hit a lot of good shots when I needed to and controlled myself well, so there were a lot of positives from that week, and the following week in Dubai, played well again.”