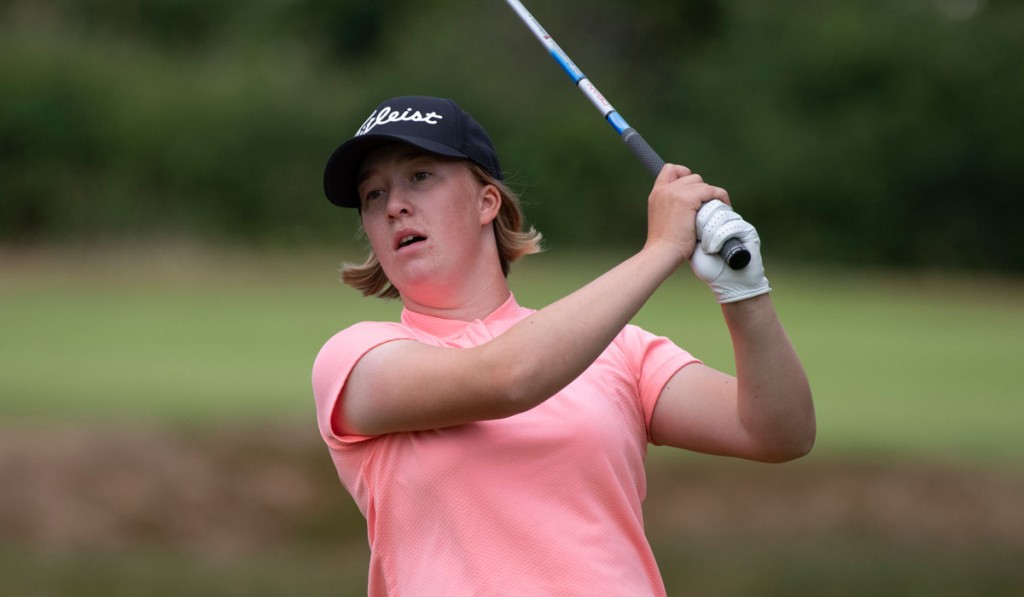 Mill Green’s Ellen Hume is riding high at the English Women’s Amateur Championship after returning from the USA where she is studying at Charleston Southern University. Picture by LEADERBOARD PHOTOGRAPHY

HERTFORDSHIRE’S Ellen Hume caused the upset of the day when she knocked out defending champion Georgina Blackman at the English Women’s Amateur at Saunton, Devon.

The 19-year-old from Mill Green, who won by two holes, admitted that she felt some nerves as she prepared to face the England international from Chelmsford in the first matchplay round.

But Hume has returned from her first year at college in the USA with her confidence high and told Golf North: “I’ve been paying well out in America and I knew I was in a good place with my game and I battled it out.

Blackman, from Essex, took the early advantage and was three up after six, helped by holing an enormous birdie putt on the fifth. But after 10 holes the two players were all square and trading holes as the match moved to its conclusion.

Hume pulled off a delicate up and down on the 16th to move one ahead and she sealed her win with a par three on the last. “It was an amazing feeling to win, especially playing such a talented golfer. I’m very happy,” she said.

Humphreys, the number one seed, held off a strong challenge by Briony Bales from Co Durham, winning through on the 17th. “We both played well, with lots of pars and birdies,” said Humphreys. “It was always up and down, there weren’t many halves!”

The 17-year-old, who has won Irish and Welsh titles already this month, got ahead with a birdie on the 14th – after taking on the corner with her drive – and then won with another birdie on the long 17th, after reaching the green in two.

Wardle, from Prestbury, and Toy both won 4&2 over Stock Brook Manors’s Holly Haslam, from Essex, and Ross-on-Wye’s Kate Bibby, while Heath was a 3&2 winner over Woodsome Hall’s Melissa Wood, the other Huddersfield player in the last 32.

Meanwhile Staffordshire’s Emily Brennan (Trentham) won through two matches. First she beat Gloucestershire’s Ebonie Lewis, from Long Ashton, in a preliminary round to decide the final place in the main draw.

Then she caused another of the day’s upsets when she beat Lindrick’s Nicola Slater, the Yorkshire international and winner of the 2018 English Women’s MatchPlay Championship.

For the full second round results and to see the draw for Saturday’s third round matches click here.

Molinari in five-way tie at the top of Made in Denmark leaderboard with Murray
Clements collects at Brocket Hall with £10,000 prize at the IFX Payments Championship