By Andrew Griffin on 2nd September 2019 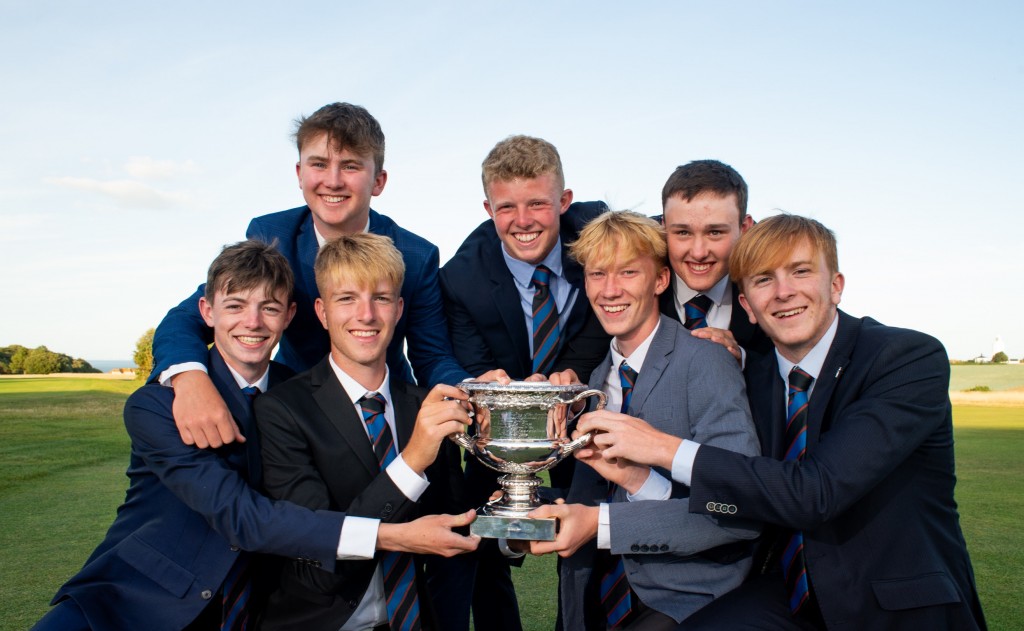 Devon emerged from the three-day English County Finals at North Foreland as champions for the first time after drawing with Lancashire. Picture by LEADERBOARD PHOTOGRAPHY

DEVON won the England Boys’ County Finals for the first time after a final day full of high drama at North Foreland Golf Club in Kent.

The Devon team went into the last day knowing they needed at least a halved match to beat Lancashire in the decider.

And that is exactly what they achieved after a dogged display against formidable opponents who themselves were bidding for their first victory in the competition since 2006.

The victory came in what was Devon’s fourth appearance in the Finals and was all-the-more emotional because it was achieved just a few months after their popular long-term captain, Grahame Moore, had passed away after a long battle with illness.

Lancashire pair George Holland and Jack Anthony McPhail got the final day off to a great start when they beat Devon’s James Reed and Fred Bishop 3&1 in the opening foursomes.

But Devon’s Craig Passmore and David Baldwin quickly levelled things up with a one hole victory over Alex James and Charlie Ward and it was still all square at lunch when Devon duo Matt Millar and Jay Scott halved the third of the three foursomes against Lancashire’s Josh Fallows and Jamie Van Wyk.

Lancashire had beaten holders Yorkshire in the Northern Qualifier to get to the Finals in Kent and briefly they looked like following their great rivals as champions when Holland beat Passmore in a high quality top singles which went all the way to the 18th before the Lancashire player won by one hole.

Millar then put Devon’s first singles point on the board when he beat Ward 3&2 but the next two games went to Lancashire when Fallows beat Bishop 4&3 and Matthew Jackman defeated Jack Jeffery by one hole after the latter found his ball cruelly plugged in the sand on the final hole.

At that stage the Devon team knew they needed to win both the last two matches to secure the 4½-4½ draw needed to clinch the trophy and almost simultaneously that is what happened when James Reed beat McPhail 3&2 and Scott defeated Van Wyk 2&1.

“This is a very emotional moment for all of us”, admitted Devon captain, Gary Milne. “Grahame was team manager from 2008 or 2009 until he passed away in July, just before the South East Qualifier. That was a tough one for all of us, but we got through and have now gone one better.”

“It was always Grahame’s dream to win this, so I’m sure he will be looking down watching us with a smile on his face.”

“His wife, his son and his grandson were all here today and it makes it even more special for all of us to share this moment with them.”

“The boys have been fantastic all week,” he added. “Every boy has delivered and produced points. There has been a great team spirit. They’ve been brilliant and I couldn’t have asked for more from any of them.”

“I’m over the moon. It could easily have swung against us this afternoon, but we hung on in there when we had to and the guys at the back saw us through.”

“I always said that Grahame was still team captain, and that I’d see it through for him, and now that we’ve done it, I couldn’t be more pleased.”

“It’s been a fantastic week,” said Lancashire captain, Michael Carney. “They battled hard all week. The first day we were behind, but they pulled it round in the afternoon. The same yesterday, they came back. I couldn’t have asked any more from them all week.”

“It was a great game,” he added. “We’re undefeated over the three days but just weren’t quick good enough. All credit to Devon. But we’ll be back, back fighting.”

In the other match on the final day Northamptonshire beat hosts Kent 7-2 to claim third place behind Lancashire.

They started the day with a 2-1 win in the foursomes and then saw Harry Oddy, Josh Pritchett, Corey Neville, Joe Quin and Luis Witherall all win their singles.

George Young earned a consolation point for Kent when he beat Owen Watts 4&3 in the last singles match.