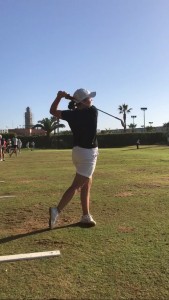 In January 2014 Bethan who has been a member at Long Ashton Golf Club for many years, embarked on a three year High Performance Programme with her ambition of becoming good enough to achieve a place on the Ladies European Tour (LET) by the end of 2016.

The journey has been very demanding and during the last twelve months Bethan has illustrated levels of confidence, capability and emotional maturity commensurate with those aspiring to professional status.  At the final LET Qualifying Tournament in Morocco her 31st position won her the right to join the Ladies European Tour but not full playing rights for 2017. Although she missed a full card on the LET by 1 shot, her 31st position puts her at the very top of her category 09b. This will allow her entry into full LET events when there are spaces and entry into any of the LET Access Tournaments, the 2nd tier of the ladies professional tour.  At her first attempt this was an impressive achievement.

Bethan officially turned professional on 6th January 2017, joined the LET and is beginning the next stage of her development.   Long Ashton is rightly very proud of Bethan’s achievements to date and a number of club members have been very generous in their support enabling Bethan to achieve her goal and she is immensely grateful to everyone who has helped her development.

Bethan said “I am so pleased I have made the decision to turn professional and am really looking forward to the challenging year ahead testing myself at the highest level.”

Bethan embarks on the next stage in April and we all wish Bethan every success in her first year as a professional golfer.

Exciting times at Long Ashton following the progress of Bethan at the start of her new professional career and also following Chris Wood who started as a junior and is now playing on the European Tour and was part of the Ryder Cup team in 2016.  Wishing them both a great 2017!